The Panthers had not recorded a sack and allowed 65 points in their first two games but looked like a different unit. They sacked Justin Herbert twice and converted three turnovers into 12 points.

Teddy Bridgewater was 22 of 28 for 235 yards and a touchdown in his first win with Carolina (1-2). The seven-year veteran helped the Panthers snap a 10-game losing streak dating to last season. 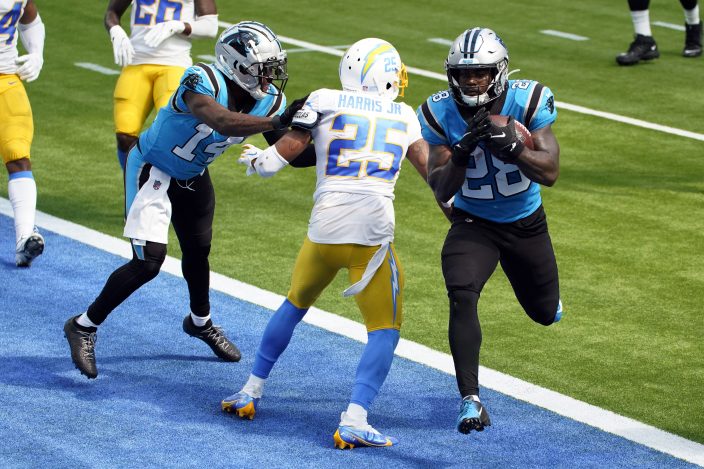 Carolina Panthers running back Mike Davis (28) runs into the end zone with for a touchdown after a reception during the first half of an NFL football game Los Angeles Chargers Sunday, Sept. 27, 2020, in Inglewood, Calif. (AP PhotoAshley Landis)

Herbert became the third quarterback since the merger to throw for 300 yards in his first two starts. The rookie was 35 of 49 for 330 yards and a touchdown, but also had a fumble and an interception.

Keenan Allen had 13 receptions for 136 yards and a TD while Austin Ekeler had 159 scrimmage yards (59 rushing, 80 receiving) and a score.

After forcing Carolina to punt, the Chargers (1-2) took over on the LA 1 with 1:43 remaining. They drove to the Carolina 28 before the drive stalled. Herbert had Allen open in the end zone with 6 seconds left but Tre Boston broke it up. 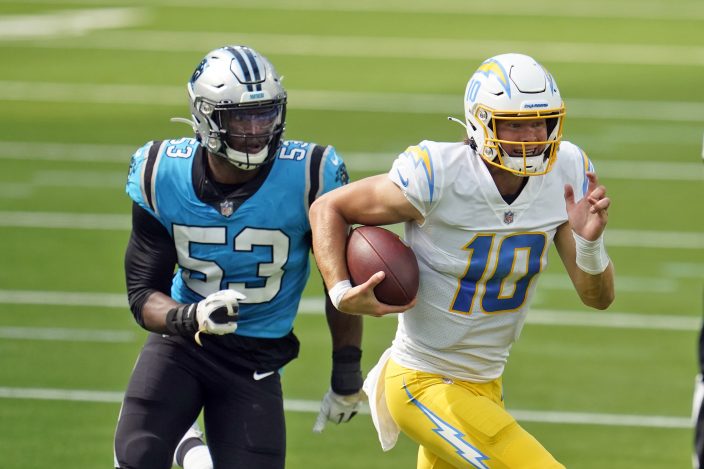 On the final play, Allen caught the ball at the Carolina 15, but his pitch to Ekeler was too high.

After going three-and-out on its opening possession, Carolina scored on five consecutive drives in the first half. Four ended with field goals by Slye. 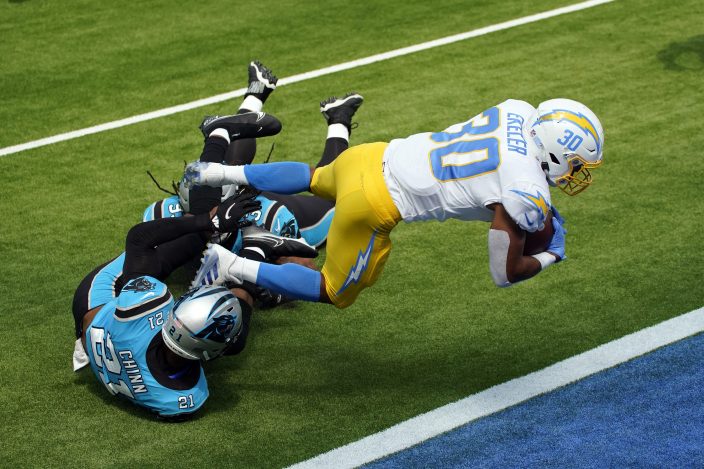 Los Angeles Chargers running back Austin Ekeler (30) lunges into the end zone for a touchdown over Carolina Panthers outside linebacker Jeremy Chinn (21) during the first half of an NFL football game Sunday, Sept. 27, 2020, in Inglewood, Calif. (AP PhotoAshley Landis )

The Chargers took a 7-6 lead early in the second quarter when Ekeler ran it from around right end from 12 yards. Carolina regained the lead on the ensuing possession when Slye connected from 30 yards.

The Panthers got their only touchdown after a Chargers turnover. They took over at the Carolina 43 after Shaq Thompson recovered Joshua Kelley's fumble and scored in eight plays. Mike Davis caught Bridgewater's screen pass and went 13 yards to the end zone. Nasir Adderley blocked Slye's extra-point attempt to keep Carolina's lead at 15-7.

It looked like it was going to remain that way going into halftime before Donte Jackson intercepted Herbert's pass intended for Allen and returned it 66 yards to the LA 8. Two plays later, Slye was good from 22 yards. 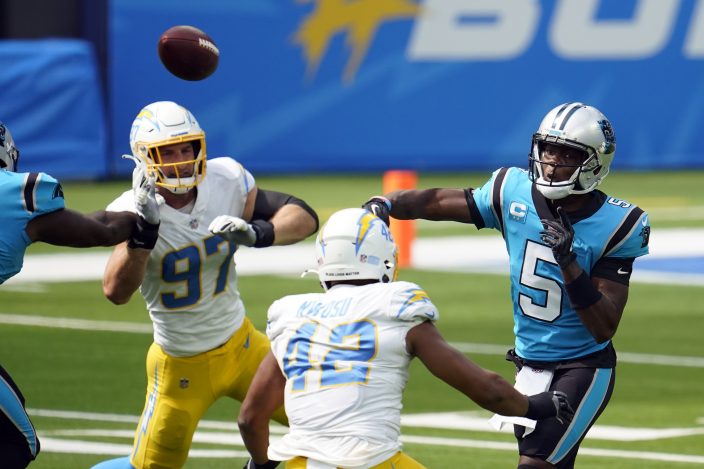 The teams traded field goals in the second half before Herbert brought the Chargers within 21-16 with a 14-yard strike to Allen with 4:39 remaining. The 2-point attempt failed.

Panthers: CB Donte Jackson (toe) was injured during the second half and did not return.

Chargers: CB Chris Harris (ankle), OT Bryan Bulaga (back) and WR Mike Williams (hamstring) were injured in the second half and did not return.

Chargers: Have two straight on road, beginning next Sunday against Tampa Bay.