Tom Brady threw three touchdown passes and Shaq Barrett celebrated his homecoming with a pair of sacks, one for a safety, in Tampa Bay’s 28-10 victory over the winless Denver Broncos on Sunday.

With his first road win for the Bucs (2-1), Brady evened his career record against the Broncos at 9-9 with just his fifth win in a dozen trips to Denver.

Before Sunday, the Broncos were the only team in the NFL with a winning record against the six-time Super Bowl champion. 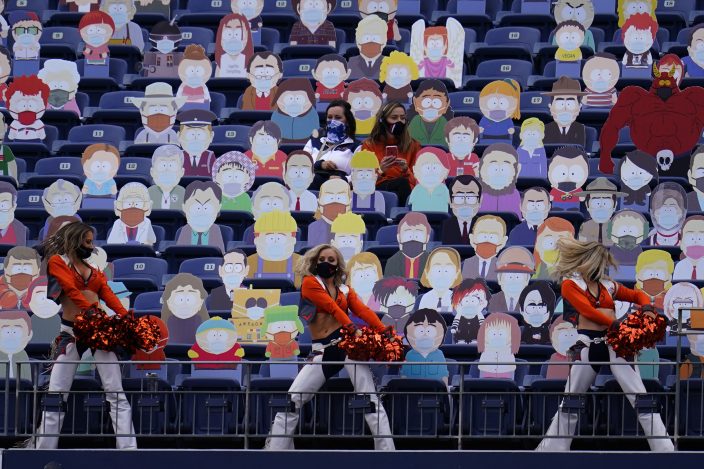 Denver Broncos cheerleaders perform as two fans sit among cardboard characters from the show South Park during the first half of an NFL football game against the Tampa Bay Buccaneers, Sunday, Sept. 27, 2020, in Denver. (AP PhotoJack Dempsey)

The Broncos (0-3) completed a second straight winless September under head coach Vic Fangio, who donned a face shield a la Andy Reid after getting fined $100,000 for failing to wear a face mask last week.

Barrett, who led the league last year with 19½ sacks in his first season in Tampa, picked up his first sacks of this season in the city where he played from 2014-18 after starring at Colorado State. 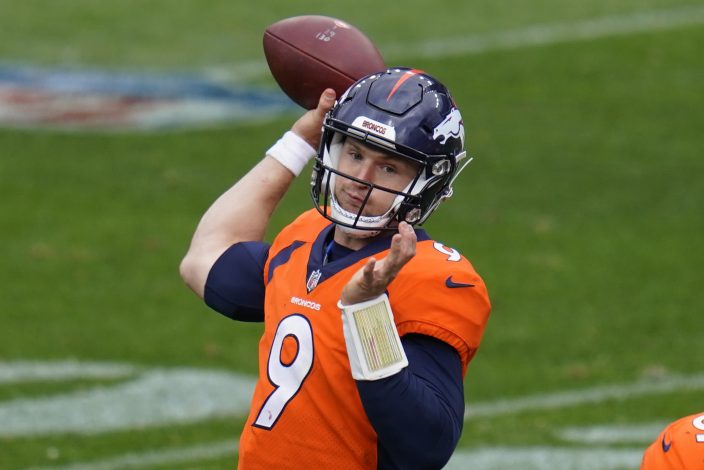 Denver Broncos quarterback Jeff Driskel throws a pass during the first half of an NFL football game against the Tampa Bay Buccaneers, Sunday, Sept. 27, 2020, in Denver. (AP PhotoJack Dempsey)

His second sack of Jeff Driskel, who started in place of Drew Lock (shoulder), came in the end zone for a safety that pushed the Bucs’ lead to 25-10.

Afterward, Barrett performed the signature sack dance of Bradley Chubb, a friendly jab at the 2018 first-round pick whose selection helped Barrett decide to leave Denver after that season.

With his full complement of receivers finally available, Brady looked like the methodical QB he was for two decades in New England, driving the Buccaneers on scoring drives on four of five first-half drives. 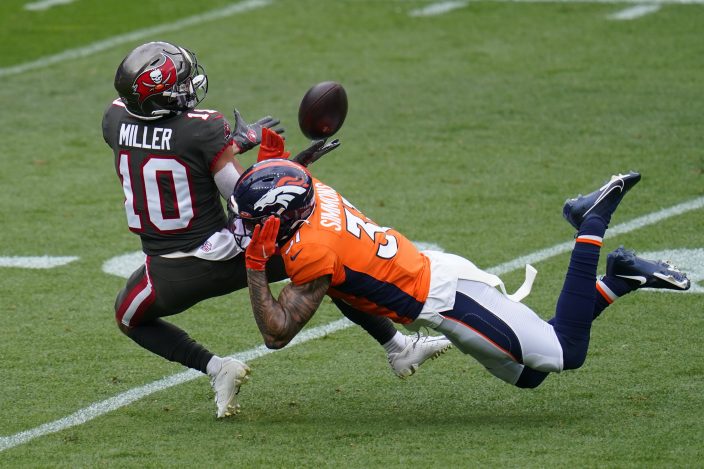 Chris Godwin caught a 10-yard touchdown pass in his return from a concussion before leaving in the second half with a hamstring injury and Mike Evans had two 1-yard TD grabs as the Bucs took a 23-10 halftime lead.

And just days after insisting he was in Tampa to serve as “a blocking tight end,” Rob Gronkowski caught six passes for 48 yards after getting shut out last week and coming into the game with just two receptions for 11 yards.

Denver special teams coach Tom McMahon, who described his unit’s play at Pittsburgh as “one word: terrible,” won’t need a Thesaurus for this one. 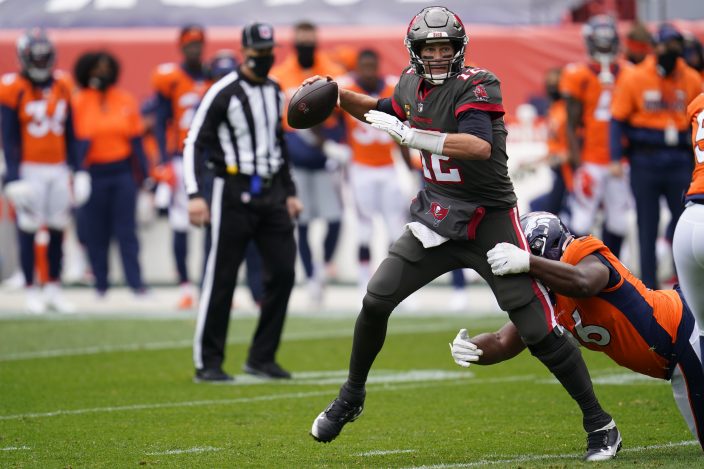 Sam Martin, who fumbled away the snap for a costly safety against the Steelers, was blocked on his first punt Sunday when rookie long snapper Jacob Bobenmoyer didn’t rise out of his stance fast enough to block Patrick O’Connor.

O’Connor swept past the snapper to block the pun t, then recovered the ball at the Broncos 10-yard line. Three plays later, Godwin reached over the goal line for Tampa Bay’s first score.

After a trio of three-and-outs and a field-goal drive, Driskel suddenly did an imitation of Brady and drove the Broncos 75 yards in eight plays, hitting Tim Patrick from 7 yards with 14 seconds left in the half to pull the Broncos to 23-10. 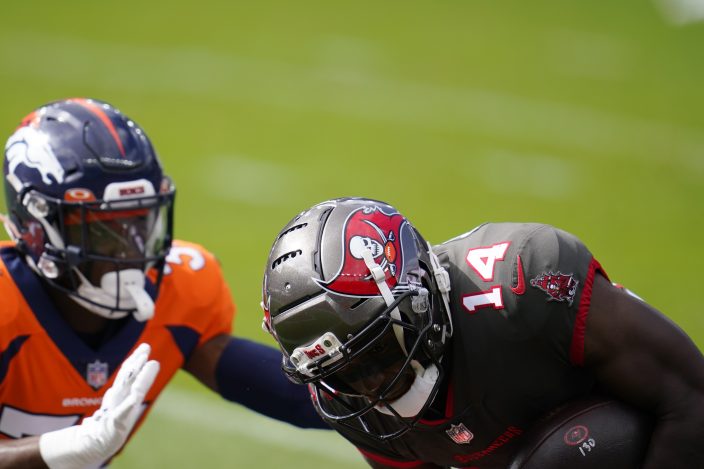 But Driskel, who fell to 1-8 as a starter in the pros, gave way to Brett Rypien in the fourth quarter with the score 28-10. He completed his first eight passes for 53 yards before Mike Edwards stepped in front of Jerry Jeudy at the goal line for a one-handed interception on fourth-and-1 from the 13.

In addition to the 5,700 fans that were allowed into Empower Field, the Broncos put more than 1,800 cardboard cutouts of the characters from “South Park” in the south stands on Sunday. Cartman, Kenny et. al were masked up and socially distanced just like the real fans in the lower four levels of the Broncos’ 77,000-seat stadium.

Brady lamented during the week that he wouldn’t get to face Von Miller, who is out indefinitely after a freak ankle injury.

“I’ve played a lot of meaningful games against him and there is nobody that’s more of an incredible player than him,” Brady said, adding that Miller is “as good of a player as there is on the defensive side of the ball in NFL history. He’s just exceptional in every way.”

Broncos have a short week with Thursday night game against the New York Jets at MetLife Stadium.