If only that had happened much earlier than the second half against the Buffalo Bills on Sunday.

Making the second of back-to-back visits to the East Coast, the travel-weary Rams fell just short of matching the third-largest comeback an NFL regular-season game, losing 35-32. After rallying from a 25-point deficit to take a 32-28 lead with 4:30 remaining, the Rams (2-1) allowed Josh Allen’s 3-yard pass to tight end Tyler Kroft with 15 seconds remaining. 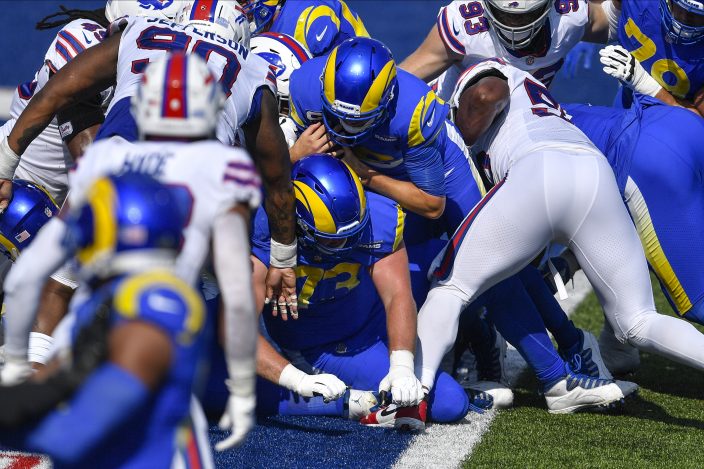 Los Angeles Rams quarterback Jared Goff, center, rushes for a touchdown during the second half of an NFL football game against the Buffalo Bills Sunday, Aug. 26, 2018, in Orchard Park, N.Y. (AP PhotoAdrian Kraus)

The bigger problem for the Rams wasn't the finish. It was the start. LA trailed 28-3 midway through the third quarter.

“We made a lot of mistakes early in the game,” Donald said. “A couple of blown things here and there, and you can’t do that against good teams.”

Donald was a disruptive force, but only after the Bills scored touchdowns on four consecutive possessions. 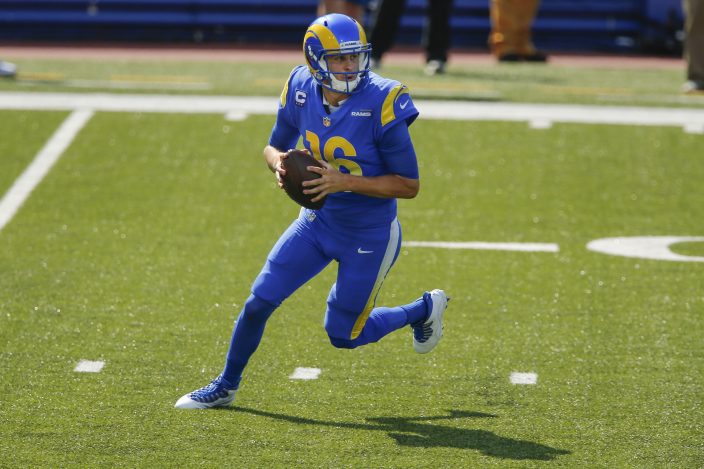 After Cooper Kupp scored on a 16-yard catch and Tyler Higbee added a 2-point conversion to cut Buffalo’s lead to 28-25, Donald sacked Allen for a 12-yard loss four plays into the Bills' next possession. Two snaps later, Donald burst in from Allen’s right side and forced a fumble, which he recovered at Buffalo’s 37.

Darrell Henderson scored on a 1-yard run six plays later to give the Rams the lead.

Donald was among the Rams defenders who weren't pleased with a crucial late pass-interference call on cornerback Darious Williams on fourth-and-7. Kroft scored on the following play.

Goff overcame a sluggish start to provide Los Angeles with instant offense. The Rams gained 317 of their 478 yards in the second half.

“I think that’s the biggest takeaway from this. Obviously would have loved to win that game and finish it with a big comeback and be hooting and hollering right now, but you learn that we’re never out of it,” Goff said. “We came all the way back and were in position to win at the end. At the same time, you’d love to close this out and be 3-0, but we’ll learn.”

The Rams topped 400 yards in offense for the third straight game, and Goff finished 23 of 32 for a season-high 321 yards with two touchdowns and an interception. In his fourth season, former No. 1 overall pick also became the fifth player in team history to top 15,000 yards passing.

Cooper Kupp had nine catches for 107 yards and a score, while Henderson had 114 yards rushing starting in place of Cam Akers, who was sidelined by a rib injury.

Receiver Robert Woods knew the explosive Rams were capable of coming back.

“Looking at the clock, we knew we were down, but we had plenty of time,” said Woods, who also scored. “We know we’re a great team. We’ve just got to play like that for all four quarters and not just turn it on at the end of the game.”

Coach Sean McVay blamed himself, noting he put kicker Samuel Sloman in a difficult position by opting to try a 53-yard kick on LA's opening drive. Sloman missed, and the Bills capitalized on the resulting field position to go ahead 7-0.

“That was a terrible decision by me. You can’t do that to Sam,” McVay said. “I saw a resilient group. They just kept battling and kept swinging.”