The Health Ministry on Monday reported 82,170 new coronavirus cases in the past 24 hours, driving the overall tally to 60,74,703. At least 1,039 deaths were also recorded in the same period, taking total fatalities up to 95,542 since the pandemic began.

New infections are in India are currently being reported faster than anywhere else in the world. The world’s second-most populous country is expected to become the pandemic’s worst-hit country in coming weeks, surpassing the U.S., where more than 7 million infections have been reported. 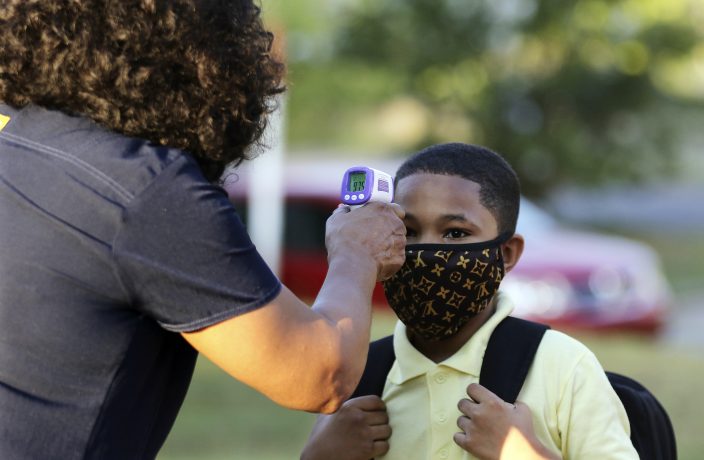 FILE - In this Monday, Aug. 24, 2020, file photo, fifth-grader Marcques Haley, 10, gets his temperature checked by school nurse Rachel White before entering Stephens Elementary School in Little Rock, Ark. The Little Rock teachers union said Sunday, Sept. 27, 2020, that its members won't show up for in-person classes due to concerns about the spread of coronavirus in schools. (Tommy MettheThe Arkansas Democrat-Gazette via AP, File)

Even as infections mount, India has the highest number of recovered patients in the world. More than 5 million people have recovered from COVID-19 in India and the country’s recovery rate stands at 82%, according to the Health Ministry.

A waiter closes a bar terrace in Marseille, southern France, late Sunday Sept. 27, 2020. As restaurants and bars in Marseille prepared Sunday to shut down for a week as part of scattered new French coronavirus restrictions, Health Minister Olivier Veran insisted that the country plans no fresh lockdowns. (AP PhotoDaniel Cole)

— Lockdowns are fading, but Republican outrage isn’t in U.S. campaigns

— UN failures on coronavirus underscore the need for reforms

The easing of restrictions in Melbourne will allow most children to return to school from mid-October and send more than 125,000 people back to work.

The 9 p.m.- 5.a.m curfew was lifted from Monday, although residents still cannot travel more than 5 kilometers (3 miles) from home.

Public gatherings of up to five people from a maximum of two households will be allowed.

LITTLE ROCK, Ark. — The Little Rock teachers union says its members won’t show up for in-person classes due to concerns about the spread of coronavirus in schools.

The Little Rock Education Association said Sunday its members are willing to teach classes virtually, but accused district administrators of not doing enough to prevent the virus’s spread. It was unclear how many teachers planned to participate in the action.

“At this juncture, LREA members believe that our schools are not safe for in-person instruction and that the risk to our students, our staff members and our community is too great,” the association said in a news release.

The superintendent of the state-controlled 21,000-student district said it was taking additional steps to ensure schools stay open for in-person instruction. Arkansas is requiring its public schools to stay open for in-person classes five days a week, though they can also offer virtual or hybrid options. Schools reopened Aug. 24.

The statement by Assistant Health Secretary Hugo López-Gatell is likely to revive debate about Mexico’s death toll, currently at 76,430, the fourth-highest in the world.

“When will the final statistics on deaths from COVID-19 be ready? Certainly, a couple of years after the first year of the pandemic,” López-Gatell said Sunday, adding that work would be left to the country’s statistics institute.

Officials have acknowledged in the past that the figure is a significant undercount, because it includes only those who died after a positive test result, almost always at a hospital. Mexico does very little testing, and many people die without a test.

But the Mexican government has avoided adjusting its death toll upward to account for people who died at home or weren’t tested.

Some parts of the country like Mexico City have begun conducting their own recalculations, finding “excess deaths” likely caused by coronavirus were at least double official figures.

SEOUL, South Korea — South Korea has reported 50 new cases of the coronavirus, its lowest daily increase in nearly 50 days, a possible effect of strengthened social distancing measures that were employed to slow a major outbreak surrounding the greater capital region.

The numbers released by the Korea Disease Control and Prevention Agency on Monday brought the national caseload to 23,661, including 406 deaths. Thirty-four of the new cases came from the Seoul metropolitan area, where about half of the country’s 51 million people live, and 10 were tied to international arrivals.

Monday’s daily jump was the lowest since 34 new cases were reported on Aug. 11. The country reported around 200 to 300 cases a day from mid-August to early September, a resurgence that forced officials to tighten social distancing restrictions in the Seoul area and elsewhere.

Officials have called for vigilance ahead of the Chuseok harvest festival that begins Wednesday and continues through the weekend. Thye are pleading for people to stay home during an annual holiday when South Koreans typically travel to visit relatives, and nightclubs, bars and other establishments deemed “high-risk” will be shut in Seoul during the holiday period to reduce gatherings.