After what looked like a game-turning, fourth-down stop in the fourth quarter, the New Orleans Saints fumbled away a chance to pull ahead of the potent Packers.

New Orleans had been 9-0 on Sunday nights under Drew Brees and coach Sean Payton, but Payton’s curious decision to replace Brees for one down backfired this time. 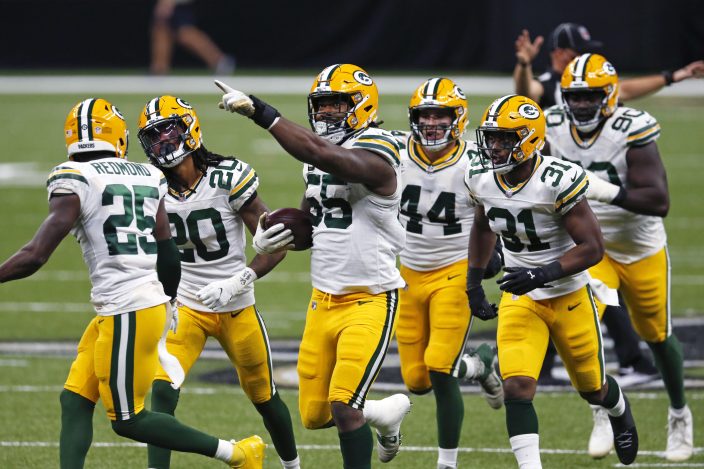 With the score tied at 27, Payton sent in Taysom Hill to run a zone option on second-and-3 from the Packers’ 41. He lost the ball on a hit from linebacker Za’Darius Smith.

“Z is consistently one of our best defensive players," Packers coach Matt LaFleur said. “Thankfully, after we went for it on fourth down, didn’t get it, he came up with the play of the game that really kind of swung it in our favor.”

The Packers took advantage of the only turnover by either team, going ahead 30-27 on a 49-yard field goal. Green Bay padded its advantage on Aaron Rodgers’s third touchdown pass — a 1-yarder to tight end Robert Tonyan with two minutes left — and held on for a 37-30 victory.

“We had just stopped them on the fourth-down play, and we got the ball in real good field position with a chance to make something of it,” Payton said. “Unfortunately we didn’t. It was a tough break. We had a chance.”

Everything appeared to be turning the Saints’ way until that point.

Brees had guided the Saints to scores on their four previous possessions, including a spectacular, weaving 52-yard touchdown by running back Alvin Kamara, who broke four tackles to tie the score at 27 after catching a dump-off behind the line of scrimmage.

Payton then successfully challenged a spot after Green Bay gambled on fourth-and-1 and were initially ruled to have made first-down yardage. The challenge gave the Saints the ball at the Green Bay 48 when a replay review ruled Marshon Lattimore had tackled running back Aaron Jones a yard short.

Brees threw a 7-yard pass to running back Latavius Murry on the next play, giving the Saints QB 15 completions in his last 18 attempts. Then he exited for Hill, a dual-threat quarterback whom Payton has used primarily as a change-of-pace runner.

“We all felt really good that we were going to go down and get points, hopefully a touchdown and kind of seize control,” Brees said. “It’s unfortunate that it (the fumble) happened at that time, but Taysom is such a conscientious guy and such a great player who does so much for us.”

The Saints followed Hill’s mistake with several others. Already the most penalized team in the NFL, they committed three on the Packers’ clinching touchdown drive, including back-to-back interference calls on cornerback Janoris Jenkins in the end zone.

Coming off consecutive 13-3 seasons, the Saints did not expect to be 1-2.

“We’re not doing enough of the little things to win on a consistent basis,” Payton said. “There are too many details that we have to improve on.”