The resignation of Economy Minister Oscar Ortiz came after he opposed the president's decision to return shares in a nationalized electricity company to its user-shareholders because it happened so close to the election. Labor Minister Oscar Mercado and Productive Development Minister José Abel Martínez did not state a reason for their resignations.

Government Minister Arturo Murillo said earlier that Ortiz had expressed opposition on the issue of the electic company “in a way that was not correct.” 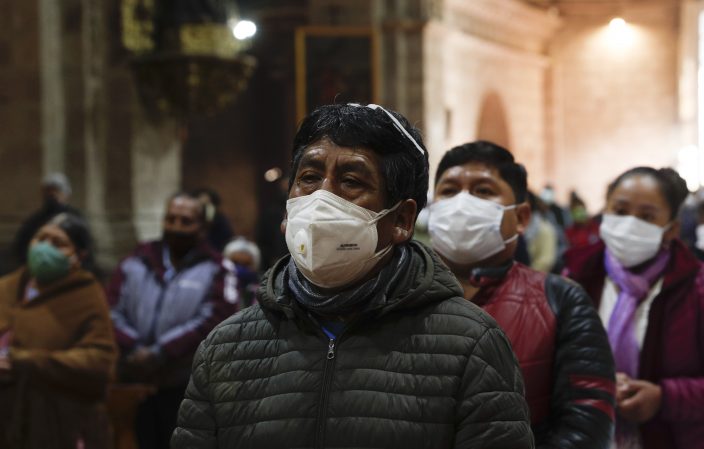 Catholic faithful wearing masks to curb the spread of the new coronavirus attend a Mass at the San Francisco Basilica in La Paz Bolivia, Sunday, Sept. 27, 2020. Churches have reopened for Mass after being closed for months because of the pandemic lockdown. (AP PhotoJuan Karita)

In a news conference, Ortiz said that decision “has no legal backing. I am not ready to sign just any decree.” He said it was a decision that “they should leave for the next administration.”

Áñez, who had been a second-tier senator, took over the presidency in November after socialist President Evo Morales resigned amid protests alleging fraud in his attempt to win a fourth term that critics insisted was unconstitutional. Other figures in the line of presidential succession also resigned with him.

But Áñez's conservative administration has been weakened by the COVID-19 pandemic, economic problems, internal disputes and allegatons of corruption. Trailing in the polls, she pulled out of the Oct. 18 presidential election.