On second thought, Doug Pederson would not have played for a tie.

The Philadelphia Eagles (0-2-1) lined up for a 59-yard field goal on fourth-and-7 with 19 seconds left in overtime against the Cincinnati Bengals on Sunday. After a false start penalty on Matt Pryor, Pederson elected to punt instead of going for it on fourth-and-12 from the Bengals 46 or letting Jake Elliott attempt a 64-yarder.

After thinking about it overnight, Pederson changed his mind. 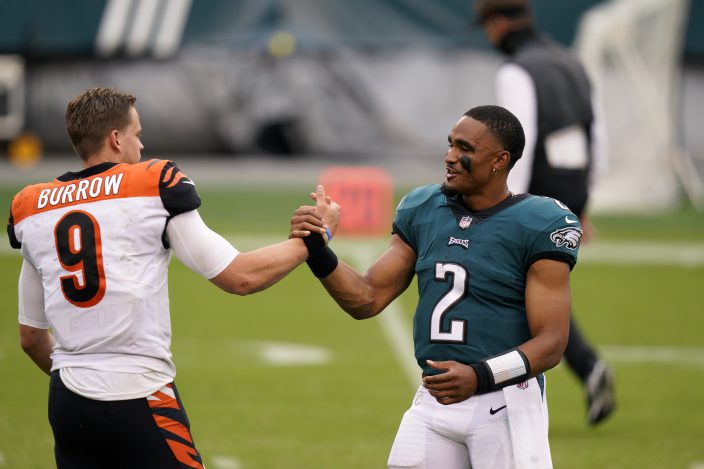 “Looking back, I probably would have elected to go for it in that situation and maybe try a ball down the field,” Pederson said Monday. “There were 19 seconds left on the clock. It’s a situation where you take the shot. And I learned from it, and I’ll move on.”

The Bengals ran the ball on one play from their 11 after the punt and the teams settled for a 23-23 tie.

There are plenty of reasons why the Eagles were even in that situation against winless Cincinnati (0-2-1). The offense is out of sync and the defense can’t make any big plays.

“Right now we’re not a very good football team,” Pederson said. “We’re not very smart. We’re shooting ourselves in the foot. We’re leaving touchdowns on the field offensively, and we’re just not executing.”

Miles Sanders ran for 95 yards on 18 carries but he only got the ball three times out of 15 offensive plays in overtime. Pederson said fatigue was a reason why Sanders has carried the ball less in the second half the past two games. Sanders missed most of training camp because of a hamstring injury. The Eagles fell to 23-5 under Pederson when they have at least 120 yards rushing.

The passing game is struggling. Carson Wentz is making bad decisions, forcing throws to receivers who aren’t open. Wentz has six interceptions already, one fewer than he had in each of the past three seasons. It doesn’t seem any wideout can get any separation except for Greg Ward, who had eight catches for 72 yards and one touchdown.

The high-priced defensive line went after rookie Joe Burrow, sacking him eight times. Ends Brandon Graham and Derek Barnett had two each and Josh Sweat and Fletcher Cox had one apiece.

Wide receiver J.J. Arcega-Whiteside had no targets and played just 18 snaps. Pederson said he was limited by a lower-body injury, but the 2019 second-round pick has been a bust. He has 10 catches for 169 yards and one TD in 19 games.

Tight end Dallas Goedert and cornerback Avonte Maddox have ankle injuries that Pederson said will cause them to miss some time. Wide receiver DeSean Jackson is day to day with a hamstring injury, but Alshon Jeffery is moving closer to returning for the first time this season.

0 — The defense has not forced one turnover in 13 quarters this season. The Eagles recovered a fumbled punt against the Rams in Week 2, but have no other takeaways.