Bam Adebayo woke up on Monday with the realization that only two teams still have a chance to win this season’s NBA championship.

Goosebumps kicked in at the thought.

What was once a 22-team bubble at Walt Disney World is down to the final two, with Adebayo and the Miami Heat set to take on LeBron James and the Los Angeles Lakers in the NBA Finals that start on Wednesday night. It’s the first finals matchup between the clubs, with the Lakers looking for a record-tying 17th title and the Heat seeking their fourth in the last 15 seasons. 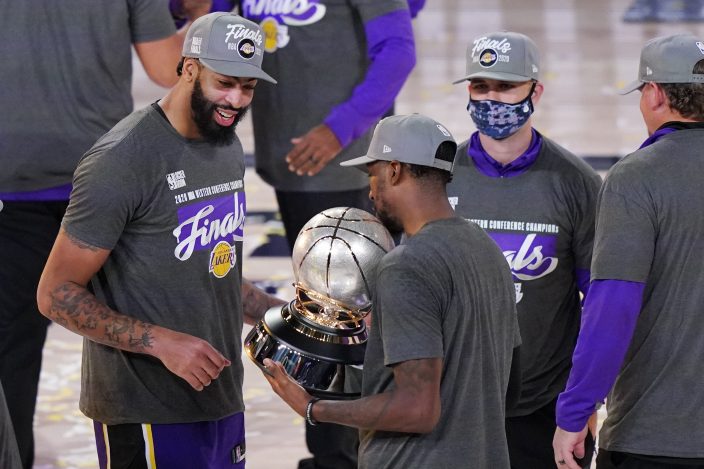 “It’s pretty cool considering, when you really think about it, it’s you and one other team that are still left standing and one of the two will be raising the Larry O’Brien Trophy,” Adebayo said Monday. “But we know that the job isn’t done yet.”

The Heat were spending much of Monday resting up before an evening team meeting would officially start their finals preparation process. The Lakers, who won the Western Conference finals on Saturday — a day before Miami finished off the Eastern Conference crown — were starting to get their game plan in order after a one-day break as well.

Much like the Heat, the Lakers took a moment to enjoy winning the conference title. Winning a day ahead of Miami just happens to give the Lakers a bit more time to prepare for Game 1.

“We appropriately had fun with it that night, enjoyed it that night. And then the next day, it’s time to move on to the next ... and now it’s all business,” Lakers coach Frank Vogel said Monday. “I don’t think there’s any kind of an eye towards the end of getting home or anything like that. It’s really about staying single-minded in our focus about what needs to happen for us to beat the Miami Heat.”

Both teams are scheduled for regular practices Tuesday. It’s definitely a tight squeeze, preparation wise, compared to last year: the 2019 NBA Finals started on May 30, with Golden State clinching its spot in the title series on May 20 and Toronto on May 25.

“I tell you, it’s going to be brutalizing for our video staff,” Heat coach Erik Spoelstra said.

The Heat, who ousted East No. 1 seed Milwaukee in the second round, are trying to become the second team in the last 18 seasons to beat a pair of No. 1 seeds in the same playoff. Toronto did it last year, first to Milwaukee, then to Golden State. Before that, one would have to go back to 2002 when the Lakers pulled off the feat.

“I’m full of emotions,” Heat guard Goran Dragic said. “I’m happy. I’ve been waiting for this for a long time, for 11, 12 years, and finally I’m here. All the credit goes to those guys who are believing it and to my teammates. I’m just happy. I’ve been through a lot in those five years, ups and downs, and I’m just happy to be here and to be part of this big moment. Can’t wait for the finals.”

The Heat celebrated into the wee hours of Monday morning before retiring to their rooms for a few hours of sleep.

Adebayo said he enjoyed himself — within reason.

“I had a Shirley Temple,” Adebayo said.

The bubble has been a grind. By Game 4 or so of this series, the Lakers and Heat will have been at Disney for three months. A few players have family or friends there now, but for the most part they’ve been isolated throughout this process.

It was tough mentally. It was tough physically, playing every other day for the most part once the season resumed on July 30. But all the teams have to get through now is one more series.

“We’re super locked in,” Vogel said. “Our group enjoys each other. We’ve been through a lot. Even though we were really assembled this year, not a team that’s been together for multiple years, with everything that we’ve been through our chemistry is strong. And, you know, I think the fact that we enjoy each other away from the basketball court has really helped with the bubble environment and hopefully that will continue for us.”

Cam Newton confident he can recover from dismal outing

The Southeastern Conference has fi ...