The Los Angeles Rams all realized they did enough to lose in Buffalo long before a highly debatable pass interference call went against them in the last minute.

But once Michael Brockers had a full day to process the Rams' huge comeback and late heartbreak in their 35-32 loss to the Bills, the veteran defensive tackle was sure it all points to a big season in LA.

“There’s no question this is a great team,” Brockers said Monday. “This is a good team. We’re a young team, but we have a lot of great core leaders and a great coaching staff that has us prepared every Sunday. As long as our communication comes together and makes things happen, this team will go a long way. There’s no doubt about it.” 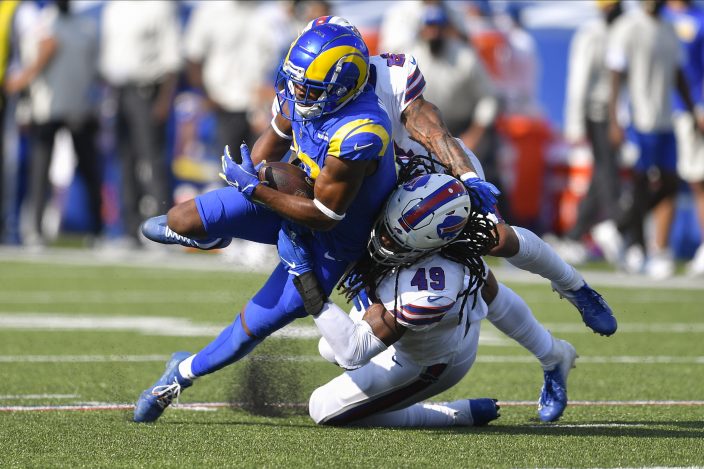 The Rams (2-1) rallied from a 25-point deficit midway through the third quarter and were one play away from stealing a win before that fourth-down flag went against Darious Williams with 21 seconds to play. Buffalo scored on the next snap.

The Rams didn't like the call, particularly because of how late the flag was thrown, according to Brockers. But the Rams had done enough damage to their own hopes — including giving up a 17-yard completion on third-and-25 right before that penalty — to realize they had no right to think one call decided their fate.

“That’s not something that I’m going to dwell on,” coach Sean McVay said Monday of the pass interference call. “The reality is that it never comes down to one play. You’re not going to get me to make an excuse about that.” 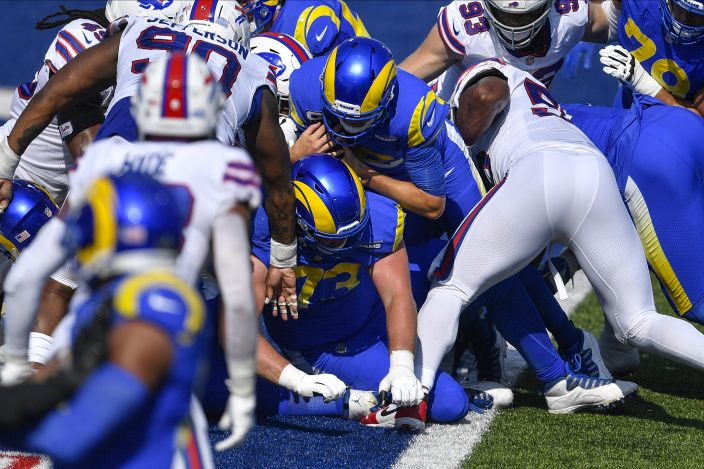 Los Angeles Rams quarterback Jared Goff, center, rushes for a touchdown during the second half of an NFL football game against the Buffalo Bills Sunday, Sept. 27, 2020, in Orchard Park, N.Y. (AP PhotoAdrian Kraus)

That team-wide maturity is exactly what Brockers liked about the first loss of the season. The Rams are frustrated about not being perfect, and it will motivate them.

“We just take it out on the Giants,” Brockers said of Sunday's opponent at SoFi Stadium. “Not to say that they're not a good team. We know what it takes to win games. We know what we have to do.” 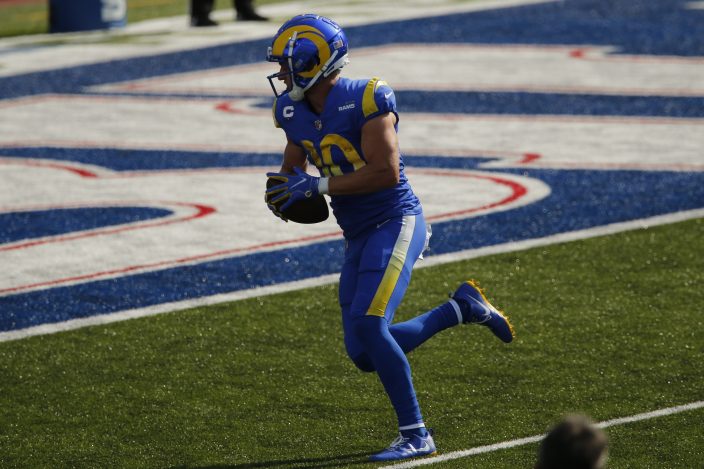 Los Angeles Rams wide receiver Cooper Kupp runs for a touchdown during the second half of an NFL football game against the Buffalo Bills Sunday, Sept. 27, 2020, in Orchard Park, N.Y. (AP PhotoJohn Munson)

The running game is strong after the departure of Todd Gurley. The Rams have rushed for at least 150 yards in three consecutive games for the first time under McVay. What's more, Darrell Henderson appears to have the makings of a star after making his first career start and setting a career high for the second consecutive game with 114 yards against Buffalo. Henderson's physical style and impressive burst could earn him the leading role in Los Angeles' three-headed backfield. “I couldn't even get up out the bed this morning,” Henderson said with a grin after his 20-carry performance.

The defense's slow starts. After an opening three-and-out, the Bills gained 260 yards on four consecutive touchdown drives. The Rams also gave up 30 of their 36 points allowed in their first two games in the first halves, which means 51 of the 71 points scored against LA have happened before halftime. “We just started a little too slow,” Brockers said. “We let 21 (points) go in the first half, and we had to climb and scratch our way back. If we start faster and take the momentum from the start, we can go out there and get a W.”

McVay's offense continues to be quite industrious. LA produced a season-high 478 yards in Buffalo for its third straight game with at least 420 yards, and the Rams are third in the NFL with 449.7 yards per game. With that solid running attack behind an offensive line that's playing much better than last season and complementing a diverse passing game, the Rams look mostly great so far.

New special teams coordinator John Bonamego's unit made another couple of mistakes. Cooper Kupp allowed a catchable punt to bounce from the 17 all the way to LA 3, and rookie kicker Samuel Sloman missed a long field goal. Both mistakes were understandable, but Kupp's inexperience as a returner and Sloman's third straight game with a missed kick are worth monitoring.

The Rams lost rookie safety Jordan Fuller to a shoulder injury after just eight snaps. That meant Taylor Rapp, who lost his starting job to Fuller in training camp, played all but seven snaps after barely getting in on defense during the first two weeks. Fuller is “day to day” this week, according to McVay, as is rookie running back Cam Akers, who missed the game with a rib injury.

111.6 — That was Jared Goff's passer rating in another solid overall performance, going 23 of 32 for 321 yards with two TD passes, one rushing TD and one interception. Goff's passer rating topped 100 in consecutive games for the first time since 2018, and he went 12 for 14 while leading the Rams' four consecutive touchdown drives. McVay said it was Goff's “best game, and it wasn't close.”

Not overlooking the rebuilding Giants (0-3), who visit Inglewood this Sunday with the Rams as big favorites. McVay's teams rarely seem to underestimate their opponents, and a 3-1 record heading into two more road games would be a solid start.