The Minnesota Twins were determined to defend their division title and start this unusual postseason at home, even if the audience at Target Field this week will be confined to family members and cardboard cutouts.

The ease and predictability of playing in their own ballpark during this virus-altered year, social distancing and all, clearly made a difference to the Twins. They had a 24-7 record at home, the best such mark in baseball.

“You want everything that you can possibly have in your favor,” manager Rocco Baldelli said, looking ahead to the best-of-three American League wild card series against the Houston Astros that starts on Tuesday afternoon with no days off or site switches. “We're very comfortable. We've enjoyed playing here.”

The Astros were 9-23 on the road, the third-worst record in the major leagues. They're the No. 6 seed after finishing second in the AL West at 29-31, matching the worst mark of all 16 qualifiers for the playoffs following the 60-game schedule shrunken by the COVID-19 outbreak.

“It’s going to be a good series,” Astros manager Dusty Baker said, downplaying the potential of home-field advantage for No. 3 seed Minnesota. "We’re due to win, and they’re due to lose.”

For the Twins, this will be quite the contrast from a year ago, when their 101-win, 307-homer season won them the AL Central and sent them to New York for the division series. 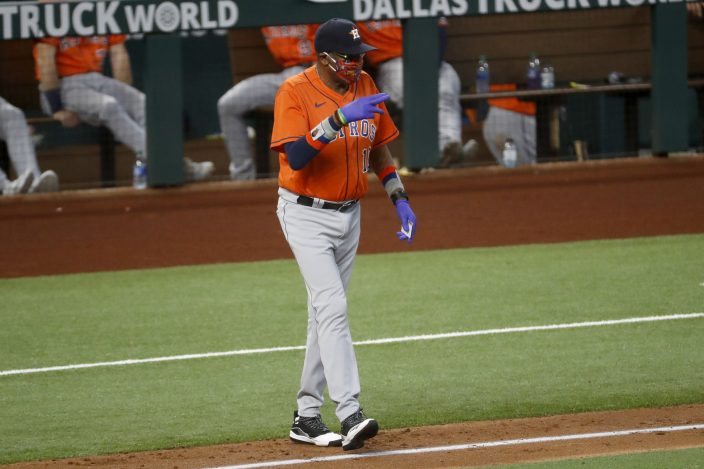 Houston Astros manager Dusty Baker Jr. signals as he walks to the mound to change pitchers during the fourth inning of a baseball game against the Texas Rangers in Arlington, Texas, Sunday, Sept. 27, 2020. (AP PhotoRoger Steinman)

The first playoff experience for most of the team came in daunting fashion at raucous Yankee Stadium, and the Twins were swept in three games by a total score of 23-7. That stretched the franchise's 16-year-old postseason losing streak to 16 consecutive games, the all-time MLB record that's also tied with the Chicago Blackhawks (1975-79) for the longest such skid in major North American professional sports.

“It toughened us up, definitely,” reliever Tyler Duffey said. "Obviously the crowd noise and things like that this postseason is going to be a lot different. Probably some guys will be able to focus better. Some guys maybe feed off that. It’s hard to know until these games start, but I’m sure everybody’s going to be fired up.”

Here are some key angles to follow for the series: 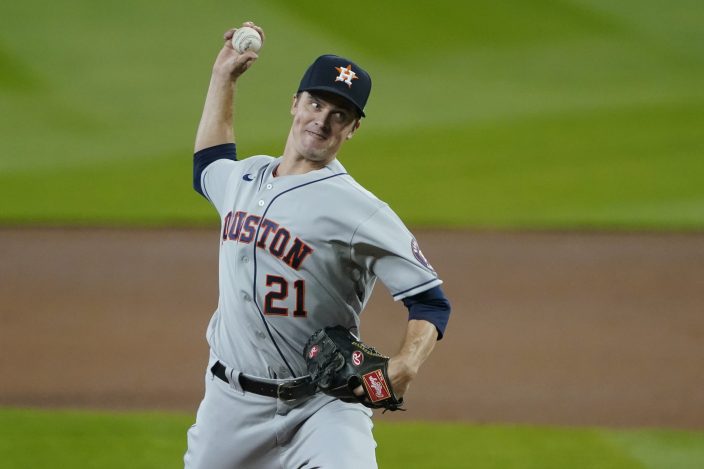 The Twins rarely played with their optimal lineup this season, and just when they were on the verge of reaching full strength on offense, a pair of vital players — third baseman Josh Donaldson (calf) and center fielder Byron Buxton (concussion) — were injured on Friday. After being held out of the remaining two regular season games as a precaution, Donaldson and Buxton both participated in a workout at Target Field on Monday, raising optimism they'll be ready for the series.

“We just want to learn as much as we can before we move forward and put anything in stone, but it was a relatively good day for both guys,” Baldelli said.

Donaldson was the biggest offseason catch for the Twins, who signed the 2015 AL MVP award winner to a four-year, $92 million contract, but the acquisition of starting pitcher Kenta Maeda in a trade with the Los Angeles Dodgers proved to make the biggest impact.

The Dodgers used the Japanese right-hander carefully, sending him back and forth from the rotation to the bullpen, but the 32-year-old who has long desired to be a full-time starter found his niche in Minnesota by going 6-1 with a 2.70 ERA and 80 strikeouts over 66 2/3 innings in 11 turns.

“He’s been everything that we’re looking for. He’s been the guy that keeps us balanced. Every time we need a good start or a win, he shows up,” designated hitter Nelson Cruz said.

The Astros became the scourge of the sport this winter when their sign-stealing system was revealed, resulting in the firing of general manager Jeff Luhnow and manager AJ Hinch and the tainting of their 2017 World Series championship. That storyline has long been overshadowed by the pandemic, but players around the game haven't forgotten.

“I wasn’t involved in any of that. For me, it’s another series,” Cruz said. “I’m focused on what I can control as a player and also putting the team in a winning situation.”

With Gerrit Cole now with the Yankees and Justin Verlander done for the season due to an elbow injury, Zack Greinke will have to carry the load for a Houston pitching staff that's not as intimidating as the last three years while the Astros went to two World Series and three AL Championship Series. Greinke will pitch Game 1.

Verlander's is far from the only key absence. Designated hitter Yordan Alvarez is done for the year after knee surgery. Closer Roberto Osuna hasn't pitched since Aug. 1 due to elbow trouble.

After all the injuries and substandard seasons by several hitters, the Astros will try to hit the reset button against the Twins.

“The records mean nothing,” said Baker, the first major league manager to take five different teams to the postseason. “How you did means nothing. You can erase everything with a good series here.”

“It's on your mind,” Baker said. “This is an opportunity to not only shine for us in the city of Houston, but to shine for the world, and these guys have been on this stage many, many times.”