All those old guys couldn't get the Dallas Stars another Stanley Cup championship.

Rick Bowness is the 65-year-old interim head coach who has been behind NHL benches in parts of five different decades. Joe Pavelski and Corey Perry are the veteran forwards in the mid-30s who had spent their entire careers with their original teams before signing with Dallas in free agency last summer just for this chance.

Instead of a title for the aged after the best efforts of those grizzled guys to get the Stars this far, their season ended with a 2-0 loss to Tampa Bay in Game 6 of the Stanley Cup Final on Monday night. 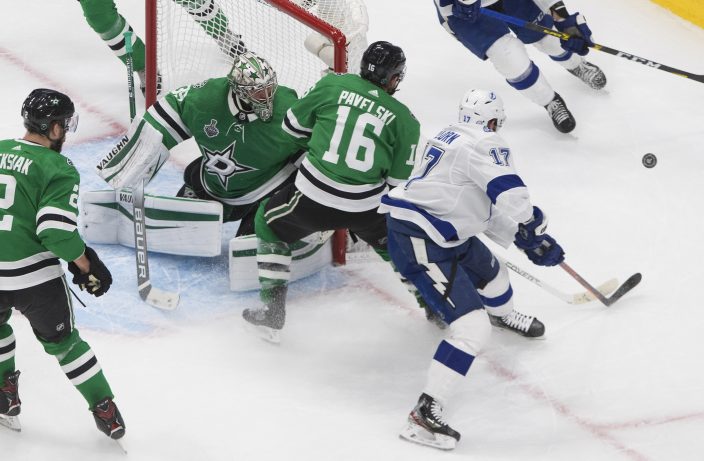 Dallas was finally undone by mounting injuries and the failure of primary front-liners Jamie Benn, Tyler Seguin and Alexander Radulov to score even a single goal in the final series. Perry and Pavelski combined for the last six goals scored by the Stars in this most unusual season.

The Stars allowed yet another power-play goal in the finale, and again were unable to convert. They were 0 of 3 with a man advantage Monday night, and 1 of 19 in the series — the only such goal came from Pavelski in the second period of Game 2.

A goal in double overtime of Game 5 by the 35-year-old Perry had extended the series. It was his second goal night night, with Pavelski getting a record tally when he scored the other goal in that 3-2 win. 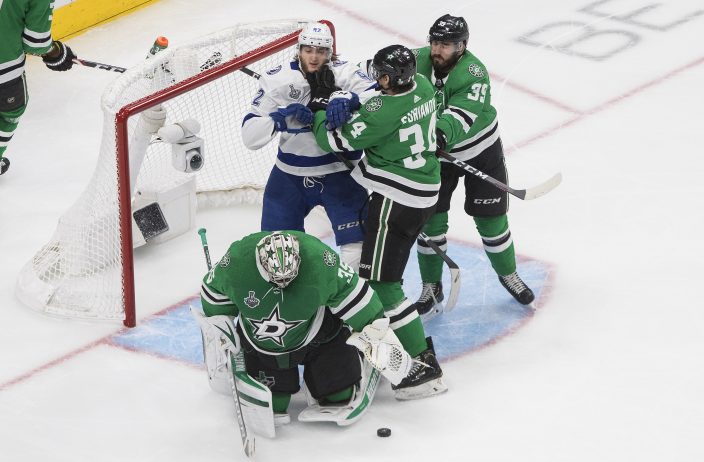 Pavelski's tying goal with 6:45 left in regulation Saturday night was his 61st career playoff goal, breaking a tie with Joe Mullen for the most ever by U.S.-born skater that he matched with two goals the previous game. That ties him for 29th on the all-time list with exactly half of Wayne Gretzky’s record 122.

Before his two goals in Game 4, Pavelski was tied for the second-most playoff goals for an American with Mike Modano, who was part of the Stars’ only Stanley Cup championship team in 1999.

After 14 goals in 67 regular-season games for the Stars, Pavelski had 13 inside the bubble -- the most ever in a single postseason by a player 36 or older.

The scoring records are no consolation for Pavelski, who last summer wanted to sign with a team that would give him another chance to win a Stanley Cup. His two finalists were the Stars and the Lightning; he got a three-year deal from Dallas

“Keep it. Next question,” Pavelski said when asked about the records after Game 4, when his second goal that night tied the game with 8:25 left in that regulation.

Perry spent his first 14 NHL seasons with the Anaheim Ducks and was part of their 2007 championship in his second year. They bought out the forward's deal before he signed a one-year contract with the Stars.

Pavelski's only other trip to the Stanley Cup Final was five seasons ago when San Jose lost in six games to the Pittsburgh Penguins. That was his first season as captain of the Sharks, for which he had played since 2006-07. His rookie season was the same year Perry got to raise the Stanley Cup at age 22.

Bowness, promoted by Dallas in December after Jim Montgomery was fired for off-ice issues, used to be the top assistant for now Stanley Cup-champion coach Jon Cooper in Tampa Bay. Bowness was part of the Lightning’s runner-up run in 2015.

The Stars went into the Stanley Cup Final off their longest break between games during more than two months inside the NHL bubble after they wrapped up the Western Conference Final in five games against top-seeded Vegas. They came out hitting against Tampa Bay to win 4-1 in Game 1, but allowed six power-play goals in losing the next three games.

Tampa Bay was 0 for 1 on the power play in Game 5, but went ahead ahead to stay when Brayden Point scored about 12 1/2 minutes in after John Klingberg's tripping penalty. Blake Coleman, the 28-year-old center from Plano, Texas who grew up a Stars fan, scored the other Lightning goal.

Dallas finished the season with several injured key regulars, including forwards Radek Faksa, Blake Comeau and Roope Hintz. Ben Bishop, their primary goaltender most of the regular season, appeared in only three postseason games, the last Aug. 31 in as second-round game.

Edmunds: What is the best vehicle for a family of five?

Trucks and SUVs are the top-sellin ...