Chancellor Angela Merkel and the governors of Germany's 16 states were conferring Tuesday on how to prevent the country's coronavirus infection figures from accelerating to the levels being seen in other European countries, and new restrictions were possible.

New infections in Germany have hit the highest levels since April in recent weeks, with more than 2,000 new cases per day on several occasions. That is still well below the numbers seen at the height of the pandemic's first phase, and far from the figures now being recorded in some other European countries — notably France and Spain.

But it has set alarm bells ringing in Germany. Infection rates in Munich and some other cities have recently hovered around the mark of 50 new cases per 100,000 residents a week, a level that requires authorities to take action. Infection spikes are cropping up elsewhere, such as in the western town of Hamm, where a persistent outbreak has been linked to a wedding party. 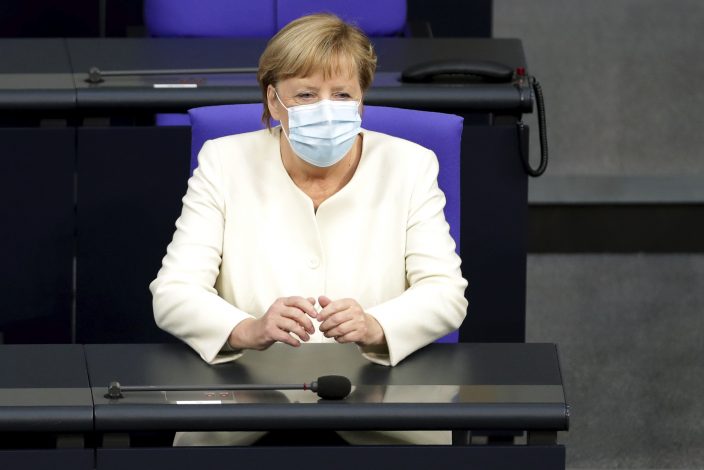 German Chancellor Angela Merkel arrives for a budget debate as part of a meeting of the German federal parliament, Bundestag, at the Reichstag building in Berlin, Germany, Tuesday, Sept. 29, 2020. (AP PhotoMichael Sohn)

“We mustn’t allow the virus to spread exponentially again in individual locations,” Merkel's spokesman, Steffen Seibert, said Monday. “We can sadly see where that leads with some of our European friends.”

Officials at Tuesday afternoon's videoconference are expected to consider possible limits on the number of people attending private parties, among other issues. With infection rates varying across the country and state governments responsible for imposing and easing restrictions, it's unclear whether they will agree on one-size-fits-all measures.

Germany has recorded more than 288,000 cases of COVID-19 since the pandemic began, with over 9,400 deaths — a toll one-fourth of Britain's or Italy's virus deaths.

Merkel to meet with German mayors as virus numbers rise

Germany, which had virus under control, sees a jump in cases

Germany mandates tests for some arrivals as cases increase