Jose Altuve drew a bases-loaded walk to force in the go-ahead run in the ninth inning for Houston after a two-out error by shortstop Jorge Polanco, and the Astros beat Minnesota 4-1 Tuesday to open their AL playoff series and stretch the Twins' all-time record postseason losing streak to 17 games.

Manager Dusty Baker's Astros became the first team in major league history to win a game after reaching the postseason with a losing record.

Game 2 in the best-of-three wild-card matchup is Wednesday at Target Field. 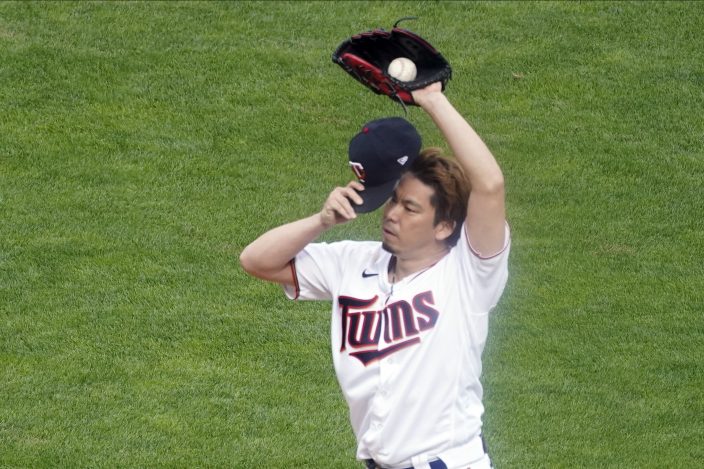 Minnesota Twins pitcher Kenta Maeda, of Japan, composes himself after giving up a walk to Houston Astros' Carlos Correa to load the bases in the fourth inning in Game 1 of the American League wild-card baseball series, Tuesday Sept. 29, 2020, in Minneapolis. (AP PhotoJim Mone)

Michael Brantley tacked on a two-run single in the ninth after Sergio Romo issued a full-count walk to the 5-foot-6 Altuve, the 2017 AL MVP who had a quiet season at the plate.

Framber Valdez, who made 10 regular-season starts for the Astros, pitched five scoreless innings in relief of Zack Greinke for the victory to keep the bullpen fresh for the rest of the series. Valdez allowed his only two hits with one out in the ninth, but Willians Astudillo grounded into a double play to end the game.

Twins manager Rocco Baldelli called for Romo, the fifth of six pitchers, to start the ninth. The Astros loaded the bases on two singles to start the inning and then the crippling two-out error, when Polanco's throw to second base after a straight-at-him grounder was low to blow the forceout. 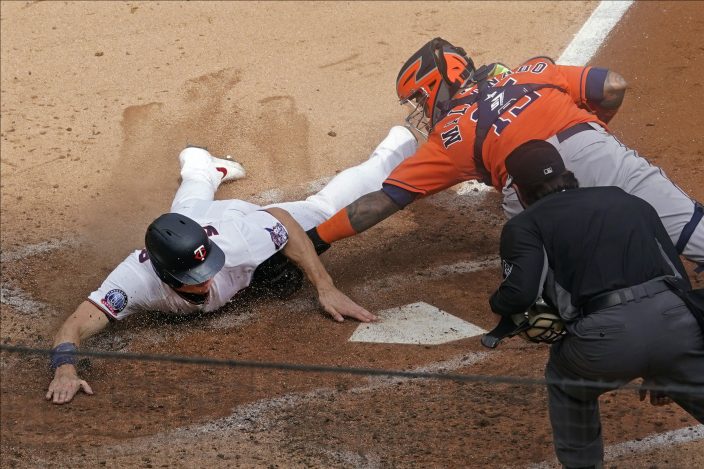 Minnesota and Houston tied for the fewest errors in the majors with 20 during the pandemic-shortened 60-game season.

Minnesota’s previous win in the playoffs was notched in New York on Oct. 5, 2004, in Game 1 of the AL division series. That was also the last scoreless postseason start for a Twins pitcher — seven shutout innings by AL Cy Young Award winner Johan Santana — until Kenta Maeda’s in this game. 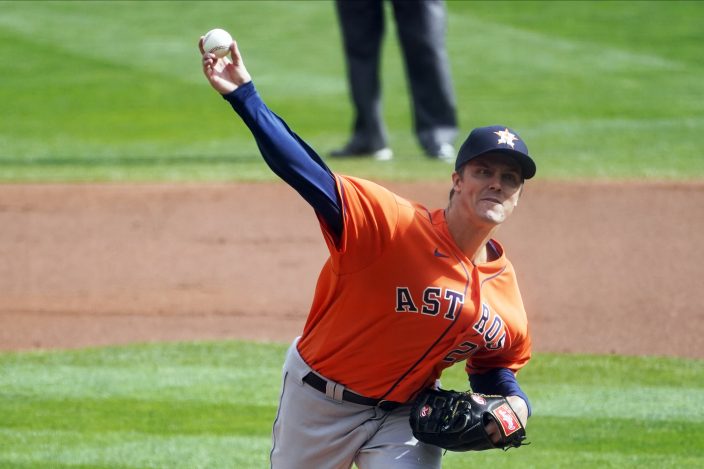 Minnesota broke the record for consecutive postseason losses in major North American sports — the Twins had been tied with the Chicago Blackhawks, who dropped 16 straight in the NHL playoffs from 1975-79.

The Astros lost their previous postseason game — that was Game 7 of the World Series last year, at home to Houston.

After defending their AL Central title, ranking fourth in MLB in team ERA (3.58) and going 24-7 at Target Field for the best home record in baseball, the No. 3 seed Twins (36-24) were certainly well-positioned to finally taste some postseason success against the No. 6 seed Astros (29-31). 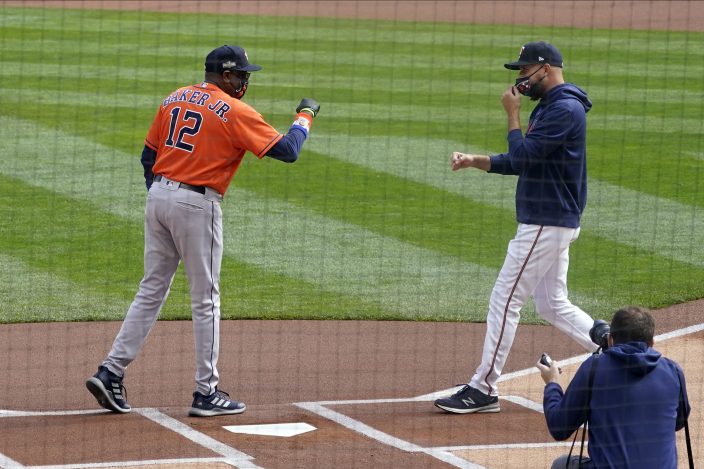 The outlook was good until the seventh, when reliever Tyler Duffey — a native of the Houston suburbs and product of Rice University — allowed three consecutive two-out singles. The second one by Martín Maldonado was a sharp chopper that chewed up third baseman Marwin Gonzalez, one of the catalysts of the 2017 World Series title for the Astros. Then Josh Reddick tied the game with a clean hit to center.

The military jet flyover during the national anthem and the crisp 58-degree temperature at first pitch were about the only signs of normality for this playoff game, with no tickets available due to the COVID-19 outbreak. There were, at least, about 200 team staff scattered throughout the second deck and roughly two dozen family members on hand to clap and cheer.

The Astros, who went 9-23 on the road this season for the third-worst mark in the major leagues, started their franchise record fourth straight postseason appearance in far different fashion than their previous three, for reasons well beyond the pandemic format. After becoming the scourge of baseball when their sign-stealing system was revealed this winter, they turned to the 71-year-old Baker, who took his fifth different team to the postseason.

Maeda turned in five shutout innings for the Twins, his longest career appearance in the playoffs after being limited to the bullpen in the postseason by the Los Angeles Dodgers over the last three years.

Maeda left with a 1-0 lead, after 40-year-old designated hitter Nelson Cruz hit an RBI double in the third inning off the 17-year veteran Greinke that scored Max Kepler from first base with a head-first slide into home plate. The Twins, missing slugger Josh Donaldson for the series due to a nagging calf injury, failed to take full advantage of Greinke's lack of fastball command by leaving the bases loaded with one out in the first.

Greinke was pulled after four innings, then put on a mask and took a seat in the front row behind Houston's dugout.

The Astros were waiting until after the game to announce their starter for Game 2, though Baker said RHP Lance McCullers Jr. was not being made available out of the bullpen on Tuesday and under consideration to take the mound on Wednesday on three days of rest.

RHP José Berríos will take the mound for the Twins in Game 2. Both of his previous postseason appearances took place at Yankee Stadium, with nine hits and six runs allowed over seven innings.