A capsule look at the best-of-three playoff series between the Milwaukee Brewers and Los Angeles Dodgers beginning Wednesday. All games in Los Angeles: 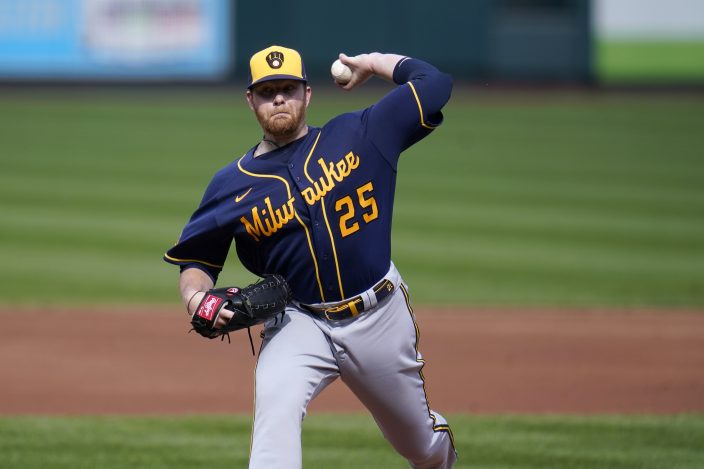 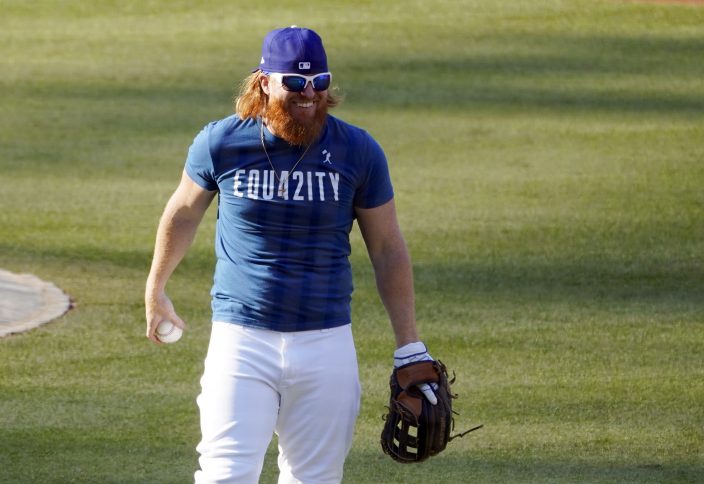 Series Summary: The Brewers are making their third straight playoff appearance, something they’d never accomplished before since the franchise launched as the Seattle Pilots in 1969. … This series is a rematch of the 2018 NLCS won by the Dodgers in seven games, the only other time these clubs have met in the postseason. … Milwaukee lost to the eventual World Series champion Washington Nationals in a wild-card game last year. … The Brewers and Houston Astros, who also went 29-31, are the first playoff teams to finish a regular season below .500 since the 1981 Kansas City Royals went 50-53 but won the AL West’s second-half title during the split-season format that year. If the 1981 strike season isn’t taken into account, the team with the lowest winning percentage to qualify for the playoffs before this year was the 2005 San Diego Padres at 82-80. … The Brewers haven’t had a winning record all season. They were at .500 on eight occasions but never got above the mark. … Milwaukee lost its top starter when Corbin Burnes (4-1, 2.11 ERA) strained his left oblique Thursday and went on the injured list. … The Brewers scored just 4.1 runs per game and ranked 26th in the majors in batting average (.223). They struck out 582 times for MLB’s second-highest total, behind only the AL East champion Rays. ... Yelich, the 2018 NL MVP and NL batting champion in 2018 and 2019, slumped badly this year but walked 46 times to rank second in the NL. 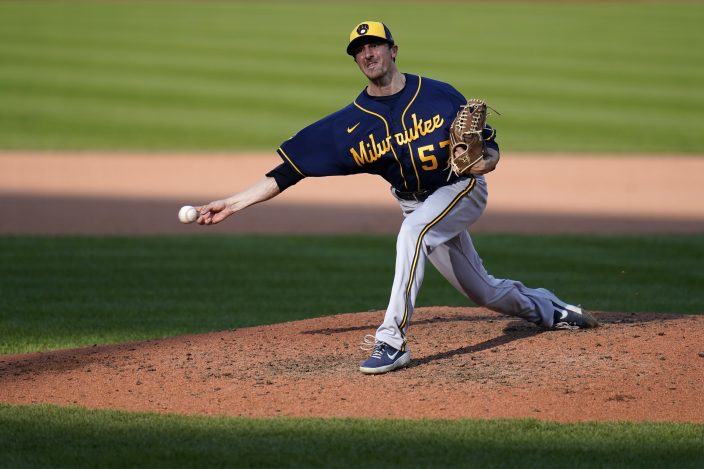 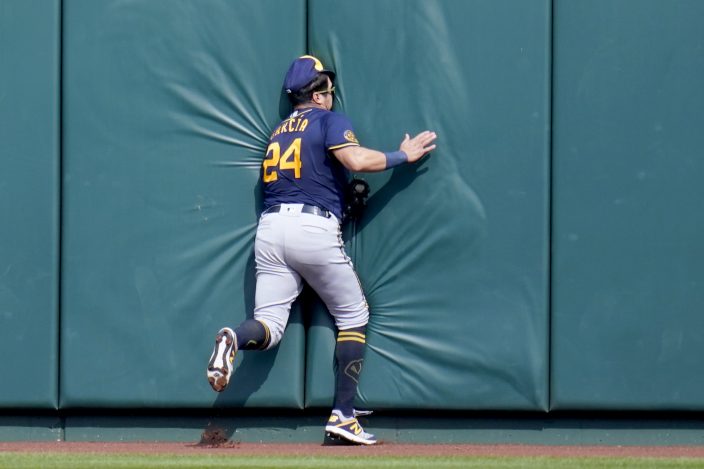 Milwaukee Brewers center fielder Avisail Garcia slams into the outfield wall after catching a fly ball by St. Louis Cardinals' Paul DeJong for an out during the second inning of a baseball game Sunday, Sept. 27, 2020, in St. Louis. (AP PhotoJeff Roberson)

Series Summary: The Dodgers won their eighth straight NL West title with baseball’s best record but are still looking for their first World Series championship since 1988. They made back-to-back World Series appearances in 2017 (lost to Houston in seven games) and 2018 (lost to Boston with Betts on the Red Sox roster). They won a franchise-record 106 games last year and didn’t make it out of the Division Series. ... The Dodgers were in first place for much of the shortened season and pulled away from the upstart Padres to win the division by six games. Bellinger, the reigning NL MVP, Max Muncy (.192) and Joc Pederson (.190) will be looking to bust out of their season-long slumps, although the offense has received an unexpected boost from Pollock, Smith and Chris Taylor (.270). Turner’s exploits in October have made him one of the franchise’s greatest postseason performers, but he’s been hobbled of late. He was on the injured list with a strained hamstring in September and tweaked his thumb on the last weekend of the season. ... One of the Dodgers’ biggest weapons is their depth. They move players in and out of multiple positions frequently — Betts even started at second base. Roberts has so many options at his disposal that even someone who has a breakout game could be sat down in favor of someone else. Keep an eye on Kershaw, considered by many the greatest pitcher of his generation — but he often struggles in the playoffs. He’s 9-11 with a 4.43 ERA in the postseason and lost his lone start in last year’s NLDS. The three-time Cy Young Award winner can’t afford a letdown in the short wild-card round. Members of the Milwaukee Brewers including Luis Urias (2) and Christian Yelich, second from left, celebrate a 3-0 victory over the St. Louis Cardinals in the first game of a baseball doubleheader Friday, Sept. 25, 2020, in St. Louis. (AP PhotoJeff Roberson) 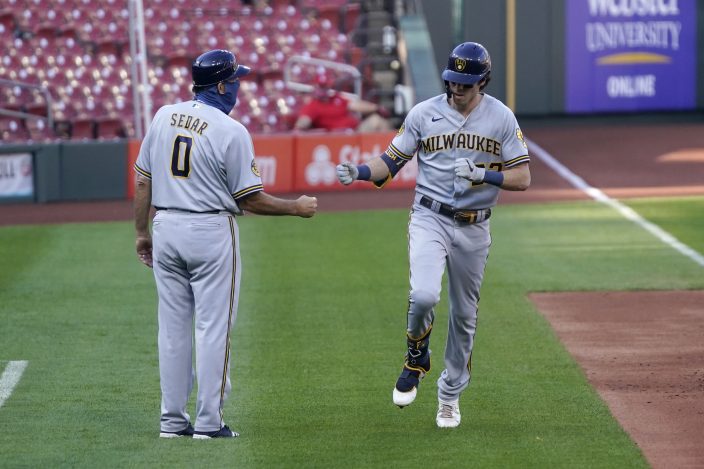 Milwaukee Brewers' Christian Yelich, right, is congratulated by third base coach Ed Sedar while rounding the bases after hitting a solo home run during the third inning in the first game of a baseball doubleheader against the St. Louis Cardinals Friday, Sept. 25, 2020, in St. Louis. (AP PhotoJeff Roberson) 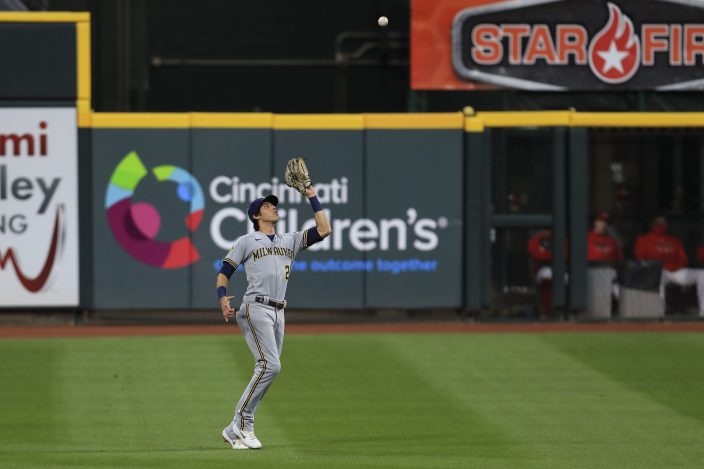 Milwaukee Brewers' Christian Yelich catches a ball hit by Cincinnati Reds' Mike Moustakas for an out during the third inning of a baseball game in Cincinnati, Wednesday, Sept. 23, 2020. (AP PhotoAaron Doster)

Sterling K. Brown finds his balance in when to speak ou ...