This year's U.N. General Assembly meeting began with calls for multilateralism and cooperation — a declaration that the urgency for countries to unite “has rarely been greater.” It concluded with a parade of divisive grievances that echoed when the final gavel fell.

Leader after leader in days of speeches delivered virtually stressed the importance of working together to navigate the coronavirus outbreak and the challenges that lie beyond it. As Germany’s foreign minister put it, COVID-19 “shows that international cooperation is neither an ideology nor an end in itself. On the contrary, it delivers results, far beyond the actual pandemic.”

Words, though, are not results. Though the U.N. and most of its member states largely envision a multilateral world, the underlying issues and challenges that divide nations sat squarely in the spotlight, as the “right of reply” at the end of the closing session demonstrated vividly. 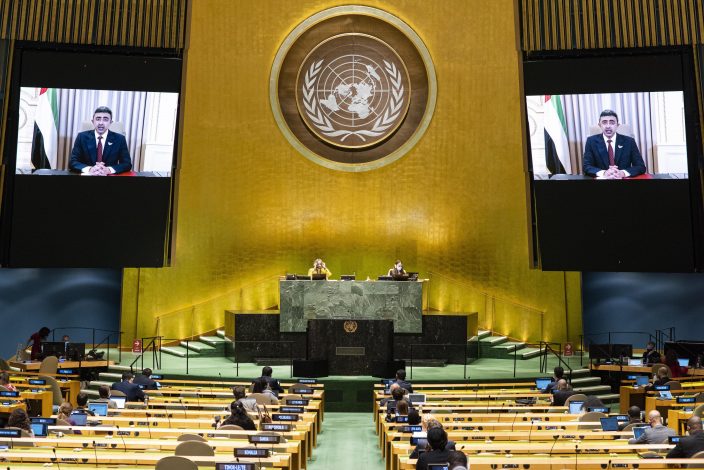 In this photo provided by the United Nations, Sheikh Abdullah Bin Zayed Al Nahyan, Minister for Foreign Affairs of the United Arab Emirates, speaks in a pre-recorded message which was played during the 75th session of the United Nations General Assembly, Tuesday, Sept. 29, 2020, at UN headquarters in New York. (Rick BajornasUN Photo via AP)

One by one they came forward — lower-level diplomats tasked with replying to leaders’ speeches with intense responses.

On the hot-button conflict of the moment, between Armenia and Azerbaijan over the separatist enclave of Nagorno-Karabakh, diplomats from the two countries went after each other over responsibility for the latest fighting. Bangladesh went after Myanmar over the more than 700,000 Rohingya Muslims who fled a crackdown by Myanmar’s military in 2017 and are living in camps in Bangladesh, still fearful of returning home -- and Myanmar responded.

Iran went after Israel over the speech by Prime Minister Benjamin Netanyahu, who claimed that the Islamic Republic would have “enough enriched uranium in a few months for two nuclear bombs” after it recently began exceeding limits set by the 2015 nuclear deal with world powers.

In this UN Photo, Volkan Bozkir, President of the 75th session of the United Nations General Assembly, is shown on video monitors as he makes closing remarks, Tuesday, Sept. 29, 2020, at U.N. headquarters. (Loey FelipeUN Photo via AP)

An Iranian diplomat accused Israel of disregarding U.N. resolutions on negotiating a two-state solution with the Palestinians, and countered that Israel “poses the most serious threats to the security of the states in the Middle East” because of its widely reported nuclear program, which Israel has never acknowledged.

The United Arab Emirates took the floor over a dispute with Iran over three Iranian-occupied islands the UAE claims and Tehran’s “destabilizing conduct” in the region, including supporting Houthi Shiite rebels in Yemen. The UAE, in turn, vehemently dismissed Iran’s allegation that the UAE was destabilizing Mideast security.

Iran, again asked to reply, insisting on its claim to the islands and accusing the UAE of using starvation “as a war tactic in Yemen.” The UAE intervened for a second time, insisted the islands are occupied. 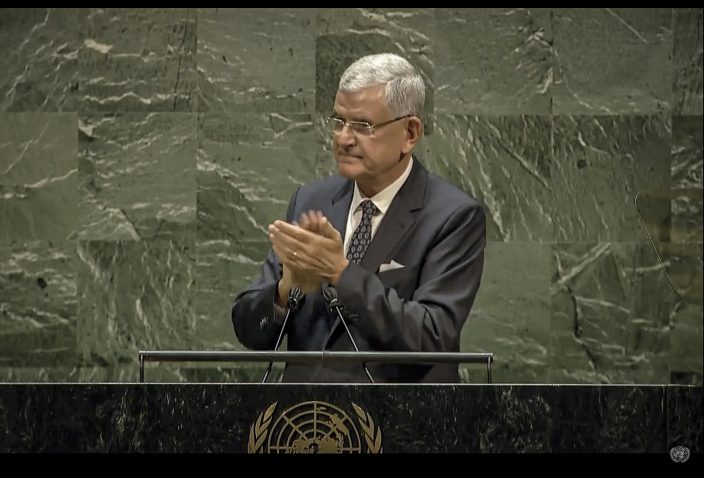 In this UNTV image, Volkan Bozkir, President of the 75th session of the United Nations General Assembly, applauds as he delivers closing remarks, Tuesday, Sept. 29, 2020, at U.N. headquarters. (UNTV via AP)

A Yemeni diplomat then responded to the Iranian, saying: “How does he dare speak about the situation in Yemen while he is responsible for the situation?" The Yemeni accused Iran of “continuing their intervention to destabilize my country by providing money, weapons, training and equipment to establish their expansionist plan across the region.”

While all the leaders delivered prerecorded speeches, the diplomats late Tuesday spoke in person, seated behind their country’s nameplate in the vast General Assembly Hall where virus restrictions meant only one representative of each of the 193 U.N. member nations was allowed.

The main in-person event was a virtual U.N. Security Council meeting that sparked one of the few real-time exchanges and centered the escalating U.S. confrontation with China. The clash at the meeting was over responsibility for the COVID-19 pandemic, which saw Russia back Beijing. But the U.S.-China confrontation extends to trade issues, claims in the South China Sea and Taiwan. 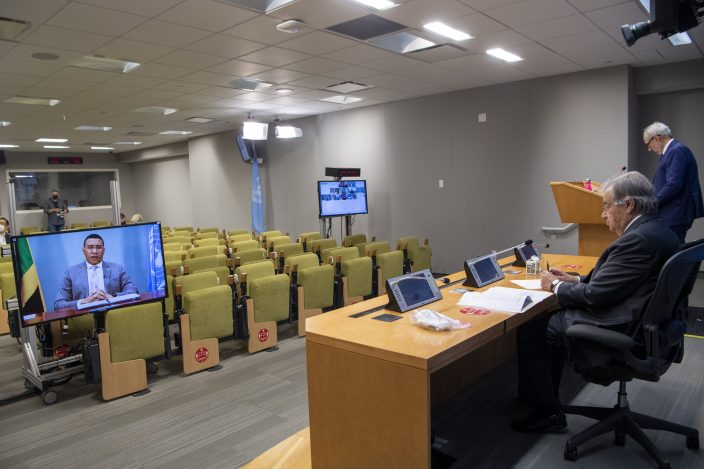 In this photo provided by the United Nations, Secretary-General Antonio Guterres, second from right, briefs reporters during the 75th session of the United Nations General Assembly, Tuesday, Sept. 29, 2020, at UN headquarters in New York. (Eskinder DebebeUN Photo via AP)

“There is only one China in the world, and Taiwan is an inalienable part of China’s territory,” the mission said.

In his remarks opening the global gathering, U.N. Secretary-General Antonio Guterres had painted a grim picture of the state of the world: an “epochal” health crisis, economic calamity, threats to human rights and worries of a new Cold War between the U.S. and China. 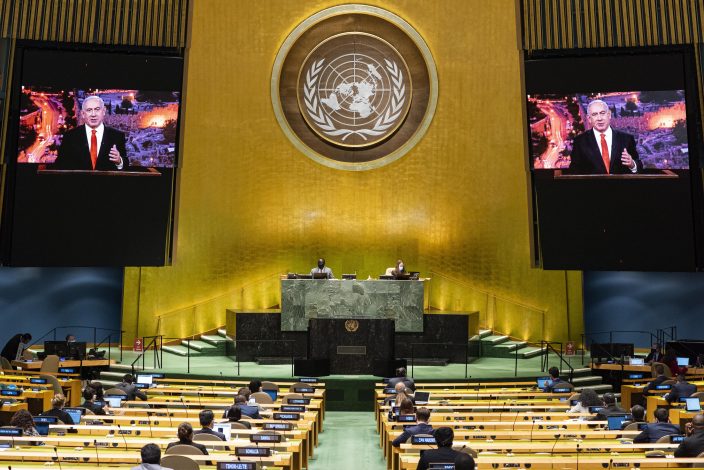 In this photo provided by the United Nations, Benjamin Netanyahu, Prime Minister of Israel, speaks in a pre-recorded message which was played during the 75th session of the United Nations General Assembly, Tuesday, Sept. 29, 2020, at U.N. headquarters in New York. (Rick BajornasUN Photo via AP)

Guterres called for global unity, foremost to fight the pandemic, and sharply criticized populism and nationalism as failed answers that often worsened the situation.

General Assembly President Volkan Bozkir ended the six-day meeting Tuesday night on an upbeat note, returning to the need for multilateralism and unity.

“The challenges facing us are enormous, but so are the possibilities of solutions,” he said. “By working together, we can overcome them.” 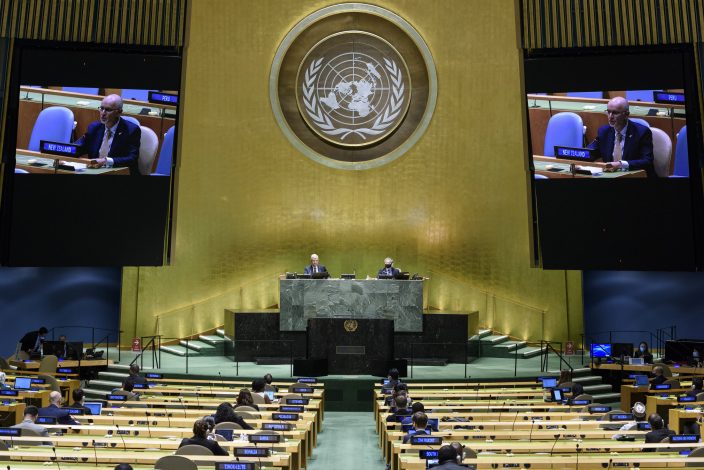 In this UN Photo, Craig John Hawke, Permanent Representative of New Zealand to the United Nations, is shown on video monitors as he speaks in person, during the 75th session of the United Nations General Assembly, Tuesday, Sept. 29, 2020, at U.N. headquarters. (Loey FelipeUN Photo via AP) 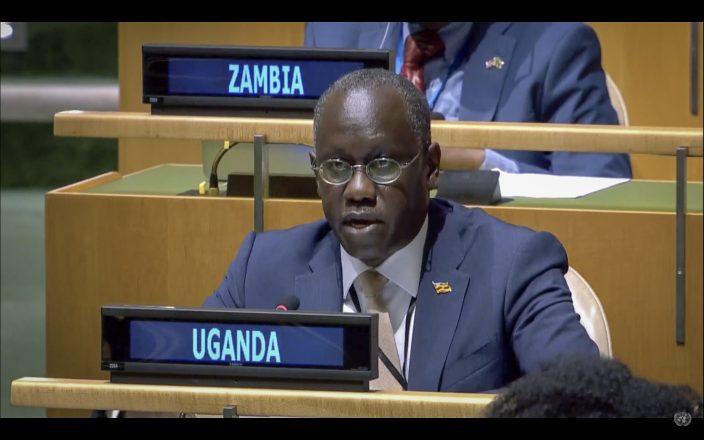 In this UNTV image, Philip Ochen Odida, Deputy Permanent Representative of Uganda to the United Nations, speaks in person during the 75th session of the United Nations General Assembly, Tuesday, Sept. 29, 2020, at UN headquarters in New York. (UNTV via AP)

US approves $1 billion in new arms sales to Taiwan

The Trump administration has appro ...