The leader of a party fielding the second highest number of candidates for Myanmar’s November elections has been arrested after local media reported allegations of a shady past, including a prison escape and financial finagling.

Despite the arrest of Kyaw Myint, another executive of his United Democratic Party said it will continue campaigning. Despite fielding 1,131 candidates for the Nov. 8 polls — second only to the ruling National League for Democracy party of Aung San Suu Kyi — the party has not won a single seat in the last two elections.

Kyaw Myint was arrested at his home Tuesday night, government spokesman Zaw Htay said Wednesday. He said Kyaw Myint was charged under Section 224 of the Penal Code, which covers escapes from custody, an offense punishable by extending the prison term by two years. 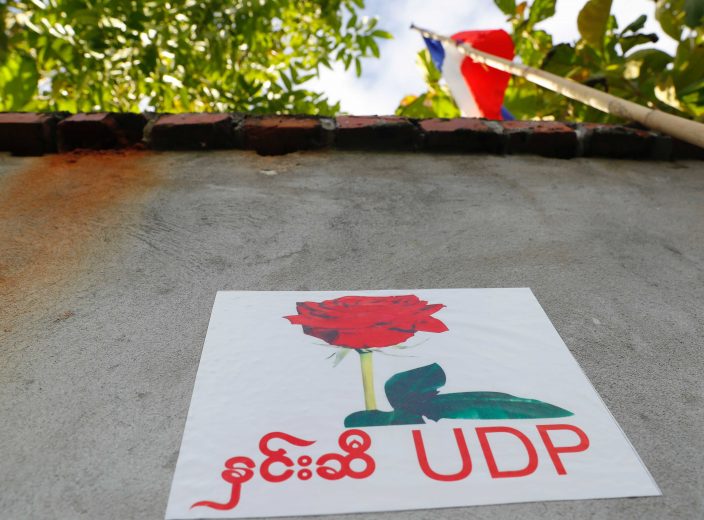 A poster of the United Democratic Party is posted on the wall of the party's headquarters Wednesday, Sept. 30, 2020, in Naypyitaw, Myanmar. Kyaw Myint, the chairman of the United Democratic Party has been arrested as a fugitive from justice after recent reports in Myanmar media contained allegations of a shady past, including financial finagling and a prison escape. The party is fielding the second highest number of candidates for the November elections, and other party executives say it will carry on campaigning. (AP Photo Aung Shine Oo)

Zaw Htay said the charge was related to Kyaw Myint’s escape in the late 1990s from prison, where he was serving a 10-year sentence for a business law offense. Myanmar at the time was under military rule.

Khin Zaw Win, Yangon Region chairman for the United Democratic Party, said its offices are not shutting down despite the arrest.

“It doesn’t matter; we will keep running in the elections," he told The Associated Press.

The arrest came shortly after stories were published on at least two independent online Myanmar news sites, Myanmar Now and The Irrawaddy, alleging a gamut of questionable activities by Kyaw Myint beginning more than two decades ago.

While Tuesday's arrest served as confirmation of their reports that Kyaw Myint had escaped from prison in 1999, other allegations could not be immediately confirmed, in part because he has been known by several different names, including Michael Kyaw Myint, Michael Hua Hu and Zakhung Zung Sau. Although he has a reputation as a rich businessman, he is not well known among the public at large.

A recent report by The Irrawaddy said Kyaw Myint was linked to alleged money laundering and was a senior member of an ethnic rebel group involved in the drug trade more than 20 years ago; had given information about the drug trade to the U.S. Drug Enforcement Administration; was granted political asylum by the United States and took up residence there and in Canada; and was fined and disciplined in Canada for an alleged violation of securities law.

According to The Irrawaddy, which said in 2009 that he threatened to sue it for citing reports linking him to illegal activities, Kyaw Myint has strongly denied allegations of money laundering or involvement in the illegal drug trade, and insisted his various businesses in Asia and North America are legal.