Florida Democrats are building a substantial lead in mail-in ballot requests for November’s presidential election even as their registration advantage shrinks, but questions remain about whether that will be a boon for Joe Biden as he tries to wrest the nation’s largest swing state from President Donald Trump.

The Florida secretary of state’s office shows that 2.4 million Democrats have requested mail-in ballots compared with 1.6 million Republicans — a 767,000 request advantage as the coronavirus pandemic makes some voters leery of entering a polling place. It’s also a sharp change from 2016 when requests — and returned mail-in ballots — were evenly split. Trump narrowly won Florida over Hillary Clinton in 2016, and statewide elections are notoriously tight.

However, Republicans have gained some ground in voter registration. Both parties have about 5 million registered Floridians. Democrats have a 183,000-member advantage, down from 330,000 four years ago. 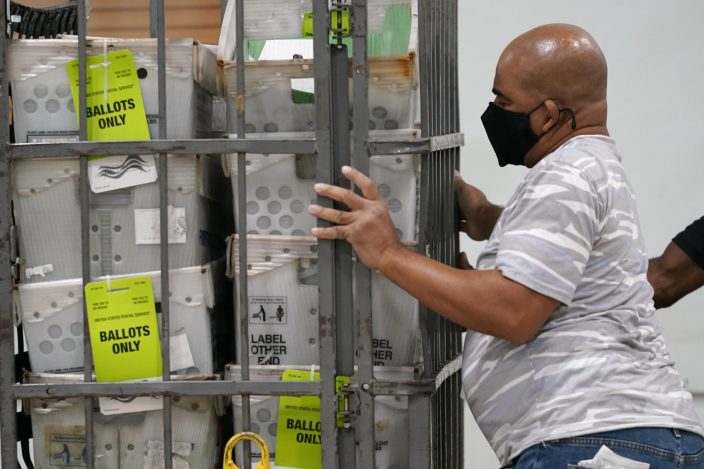 FILE- In this Thursday, Sept. 24, 2020, file photo, an employee loads vote-by-mail ballots into a truck for transport to a local U.S. Postal Service office at the Broward Supervisor of Elections Office in Lauderhill, Fla. Florida Democrats are building a substantial lead in mail-in ballot requests for November's presidential election, but questions remain about whether that will be a significant advantage for Joe Biden as he tries to wrest the nation's largest swing state from President Donald Trump. (AP PhotoLynne Sladky, File)

With its 29 electoral votes, Florida is crucial to both candidates but especially so for Trump, who moved his official residence to his Palm Beach estate Mar-a-Lago from New York last year. A Florida loss would make it nearly impossible for Trump to reach the 270 electoral votes needed to retain the White House.

No Republican has lost Florida and won the presidency since Calvin Coolidge in 1924. 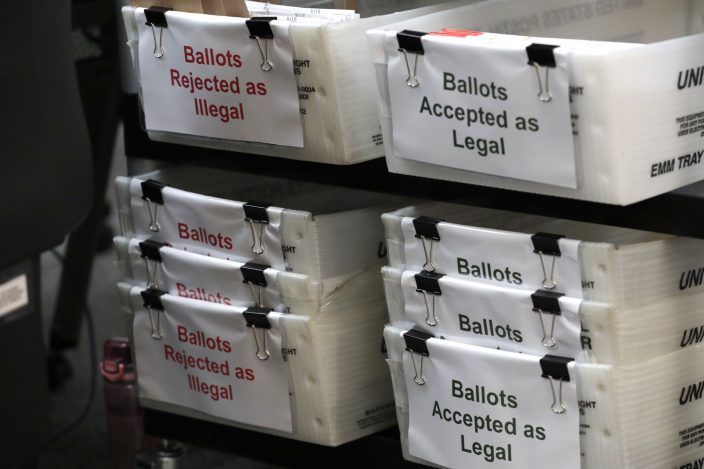 FILE- In this July 30, 2020, file photo, boxes of illegal and legal vote-by-mail ballots are shown at the Miami-Dade County Elections Department in Doral, Fla., as the the Miami-Dade County canvassing board meets to verify signatures on vote-by-mail ballots for the state's Aug. 18 primary election Florida Democrats are building a substantial lead in mail-in ballot requests for November's presidential election, but questions remain about whether that will be a significant advantage for Joe Biden as he tries to wrest the nation's largest swing state from President Donald Trump. (AP PhotoLynne Sladky, File)

Terrie Rizzo, the state Democratic chair, said the gap shows Biden’s Florida supporters are more enthusiastic and motivated than Trump’s. Democrats are voting early because they don’t want to risk not casting a ballot for the former vice president if a problem pops up on Election Day, she said. The first mail-in ballots were sent last week.

But Florida Republicans say they aren’t worried, believing any advantage Biden gets by mail will be swamped by Trump supporters casting in-person ballots. They point to several large rallies, including boat parades that attracted thousands on both coasts, as evidence of their supporters’ enthusiasm.

Danielle Alvarez, a Trump Florida campaign spokeswoman, said Democrats are “cannibalizing” their own votes — moving in-person voters to mail-in without increasing their overall support. She said Florida Republicans are increasing their pool, regardless of voting method.

“You need to know who your voters are, what moves them, and then you have got to turn them out,” she said.

Several Florida political analysts said it’s too early to predict what impact Democrats’ mail-in edge will have, assuming it holds through the Oct. 23 request deadline. Democrats still must push their supporters to return their ballots, properly completed, by Election Day. As of Wednesday morning, 70,000 Democrats have returned ballots compared to 36,000 Republicans.

“Trump really won Florida (in 2016) largely based on the voters who showed up on Election Day,” she said, adding that could happen again.

Democrat Kate Lang Bass, a Boynton Beach cost estimator for a window company, normally walks to the polls and loves getting the “I Voted” sticker, but she requested a mail-in ballot after the state’s March primary. She didn’t feel her polling place took enough precautions to protect voters from the virus.

She plans to deposit her mail-in ballot early at the Palm Beach County elections office to assure it doesn’t get lost.

Groups such as The Voter Participation Center, which says its goal is to increase participation by groups underrepresented at the polls, are boosting the surge in Democratic mail-in requests. The nonpartisan organization sent vote-by-mail applications to 4 million Floridians, garnering 720,000 requests.

“We are bringing democracy directly to people’s doorsteps,” said Tom Lopach, the group’s president. "That’s important because when you are harried from all the obligations from this moment, you are not going to slow down long enough to figure out, ‘Oh yeah, I need to vote by mail.”

In 2016, Republicans and Democrats each had about 1.3 million Floridians request mail-in ballots. The Republicans had about 1.1 million returned; the Democrats about 60,000 fewer. Trump won Florida by 113,000 votes over Clinton out of 9.1 million cast, a 1.2 percentage point margin.

In most states, Trump has railed against mail-in and absentee ballots, saying they are ripe for widespread fraud without offering proof. But in Florida, he requested a mail-in ballot and encouraged other Republicans to do likewise, calling the state’s system safe.

Alvarez doesn’t believe the president’s disdain for mail-in voting has driven Florida supporters away from the method. She said they understand his criticism doesn’t apply in his adopted home state.

“There is a big difference between the tried and true system that exists in Florida and what exists in Washington and Nevada,” she said.