Environmentalists are suing the U.S. Fish and Wildlife Service to try to force the emergency listing of a rare wildflower as an endangered species after much of its population was destroyed at the site of a proposed lithium mine in Nevada.

The federal lawsuit the Center for Biological Diversity filed Tuesday also demands the Bureau of Land Management take immediate action to protect Tiehm’s buckwheat. It says the species is on the brink of extinction at the only place it’s known to exist about 200 miles (322 kilometers) southeast of Reno.

Government scientists are continuing to investigate the mysterious, unprecedented loss of thousands of the plants discovered earlier this month at the site Ioneer Ltd. says sits above some of the largest untapped lithium deposits in the world. 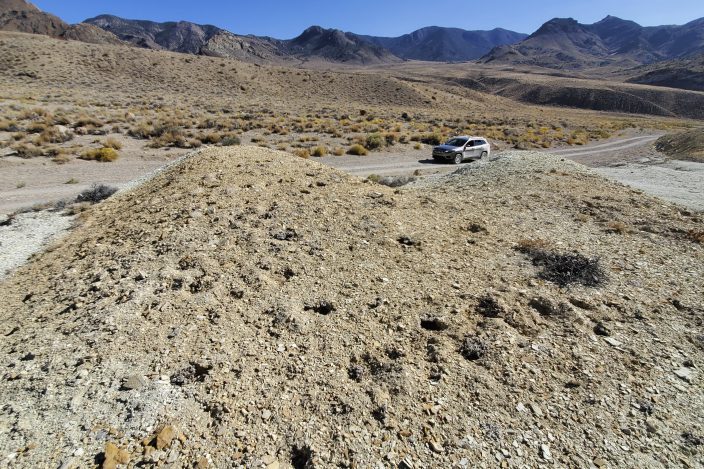 This Sept. 12, 2020, photo provided by the Center For Biological Diversity, shows the scene where thousands of rare desert wildflowers have been dug up at Rhyolite Ridge, about 200 miles southeast of Reno, Nev. Federal officials are investigating the destruction of a significant portion of the remaining population of an extremely rare desert wildflower that's being considered for endangered species protection and could jeopardize plans to build a lithium mine in Nevada, the Associated Press has learned. (Patrick DonnellyCenter For Biological Diversity via AP)

They have indicated so far they agree with the Australian mining company’s contention that rodents or other small mammals ate them.

The conservation group says somebody dug up the flowers — as many as 17,000, or 40% of the remaining population. But it said in the lawsuit filed in U.S. District Court in Las Vegas that what, or who, is to blame is irrelevant.

“Regardless of the cause, all parties agree that the impact on the plants is `alarming,’ ” the lawsuit said. “Emergency action is essential to address the dire situation of the plant and the on-going risk of further harm.” 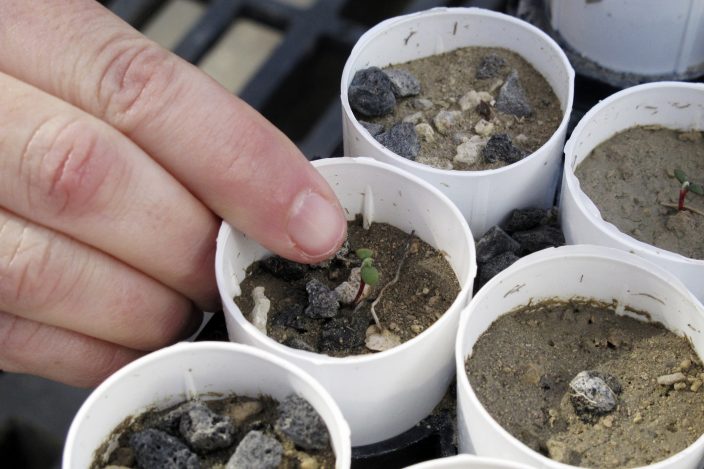 FILE - In this Feb. 10, 2020, file photo, a plant ecologist at the University of Nevada, Reno, points to a tiny Tiehm's buckwheat that has sprouted at a campus greenhouse in Reno, Nevada. Federal officials are investigating the destruction of a significant portion of the remaining population of an extremely rare desert wildflower that's being considered for endangered species protection and could jeopardize plans to build a lithium mine in Nevada, the Associated Press has learned. (AP PhotoScott Sonner, File)

Ioneer declined to comment on the lawsuit. The two federal agencies didn't immediately respond to requests for comment.

The Center for Biological Diversity and others petitioned on Oct. 8, 2019, for a listing of the buckwheat under the Endangered Species Act.

The species is found on just 10 acres (4 hectares) of land spread across 2 square miles (5 square kilometers) in the remote Silver Peak Range of Esmerelda County.

The Fish and Wildlife Service concluded in July there was enough evidence of potential threats to the plant to warrant a full 12-month review of its status. It didn't respond at that time to the center's request that the species be listed as threatened or endangered on an emergency basis.

The center had filed a lawsuit late last year against the Bureau of Land Management in an effort to halt the mining project. But it withdrew that lawsuit after Ioneer indicated it had completed exploration at the site and the agency officials assured the group it would enforce all federal laws in the permitting process.

The new lawsuit cites the “extraordinary circumstances at hand — in which the fate of a highly imperiled plant on BLM lands hangs in the balance and emergency action is clearly called for.”

“Now it’s on the brink of extinction,” he said. “This new destruction underscores the urgent need to save Tiehm’s buckwheat before it’s too late.”

Construction of the mine is scheduled to begin next year.

The lawsuit said that Tiehm's buckwheat was estimated to have a global population of 43,921 individual plants before the recent destruction sometime between July 5 and Sept. 11.

“The loss of 40% of the population would leave about 26,400 individual surviving plants,” the lawsuit said. It said loss of the plants “remains a clear and, until stopped, ongoing threat to the species’ very survival."

The lawsuit referenced a half-dozen scientists who wrote letters to the Fish and Wildlife Service to express their opinion that humans, not animals, caused the damage.

“Botanists specializing in buckwheat and desert plants, along with mammologists, have stated that the damage appears unprecedented in severity and inconsistent with previously reported rodent depredations," the lawsuit said.