In the space of a few minutes, on a prerecorded video filmed thousands of miles from where it was shown, the tech-savvy president of El Salvador captured the two strikingly different sides of this year’s unprecedented — and virtual — “gathering” of world leaders “at” the U.N. General Assembly in 2020.

On one hand, Nayib Bukele said, humanity holds in its smartphone-clutching hands a 21st-century miracle: “In a world which is almost completely connected, I can say a few words here and be heard in the farthest corners of the world.”

Yet in the same speech Tuesday, he raised this ever-present doubt: When the people who govern the world were delivering sequestered addresses to the United Nations this past week, was anybody actually listening? “If you don’t believe me,” he said, “ask the first person you see.” 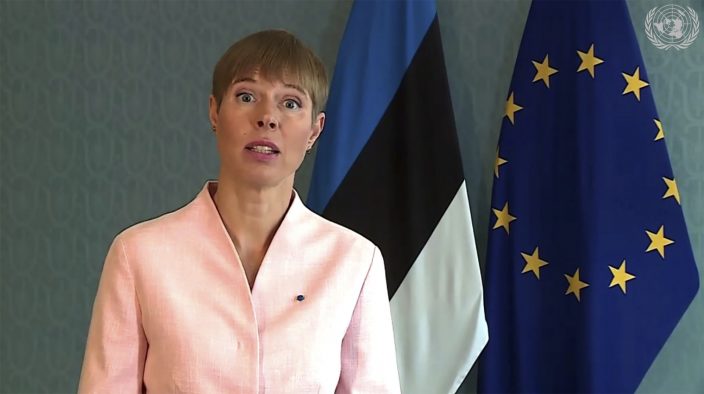 In this image made from UNTV video, Kersti Kaljulaid, President of Estonia, speaks in a pre-recorded message which was played during the 75th session of the United Nations General Assembly, Thursday Sept. 24, 2020, at UN headquarters, in New York. (UNTV via AP)

So goes the planet. And so too, it seems, goes the United Nations.

The same dissonance that technology hands us in our daily lives — closer but farther apart, more intimate yet somehow colder — revealed to a COVID-era world over the past week that even the people who collectively govern all of us can't necessarily transcend the pixels and bits of data that have become foundational to the way human civilization operates.

“It is obvious that technology is the future,” said the president of Ghana, Nana Akufo-Addo. “How else would we all have maintained a semblance of keeping in touch in the past six months, but for technology?” 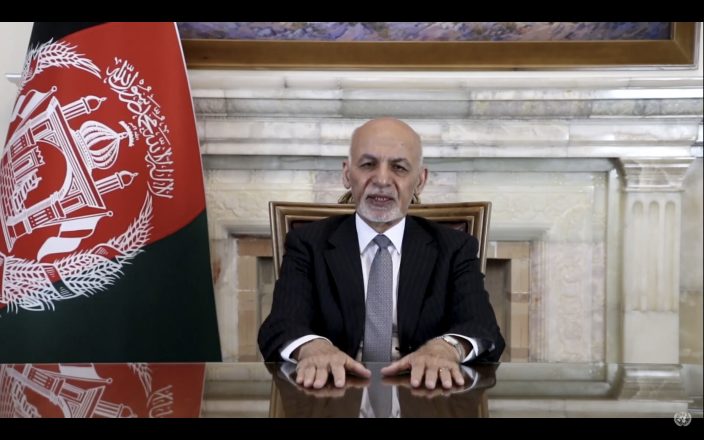 In this UNTV image, Mohammad Ashraf Ghani, President of Afghanistan, speaks in a pre-recorded video message during the 75th session of the United Nations General Assembly, Wednesday, Sept. 23, 2020, at UN headquarters. The U.N.'s first virtual meeting of world leaders started Tuesday with pre-recorded speeches from heads-of-state, kept at home by the coronavirus pandemic. (UNTV via AP)

He's not wrong. And yet.

The fact is, this U.N. General Assembly was a Really Boring Meeting, kind of like preparing dinner by opening a can of steak. Sure, all the right ingredients were in there — the world's leaders, a deeply urgent slate of problems, a global forum to hash them out. But it didn't taste right, and that wasn't just because it was virtual. Even an American online classroom, circa Fall 2020, is livelier.

What if, say, the world's leaders had been required — or even encouraged — to deliver their speeches live via satellite hookup? What if other leaders had been listening in real time? What if they could have responded? Riskier, yes, and potentially glitchier, but also more real. Something that had just happened might have been discussed. A loose, albeit very electronic, relationship between speaker and audience might have been possible. 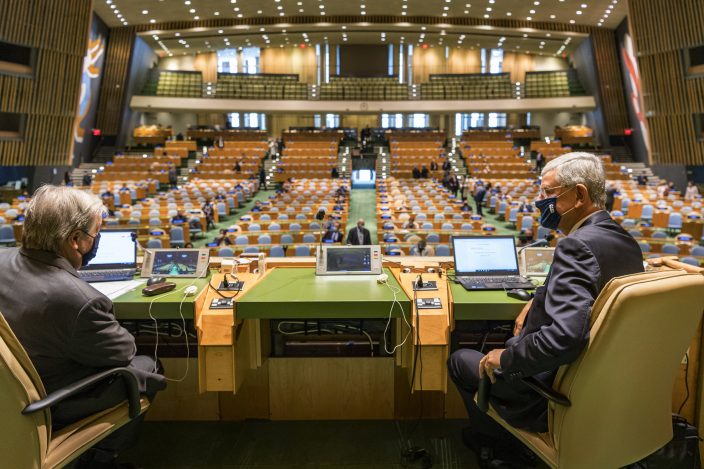 In this photo provided by the United Nations, Secretary-General António Guterres, left, speaks with Volkan Bozkir, president of the seventy-fifth session of the United Nations General Assembly, ahead of the General Assembly's seventy-fifth session, Tuesday, Sept. 22, 2020, at U.N. headquarters in New York. The U.N.'s first virtual meeting of world leaders started Tuesday with pre-recorded speeches from some of the planet's biggest powers, kept at home by the coronavirus pandemic that will likely be a dominant theme at their video gathering this year. (Rick BajornasUN via AP)

As the prerecorded speeches droned on, even the most interesting of leaders appeared kind of two-dimensional. The biggest signs of life came in the “right of reply” section, where nations that don't like each other very much — Armenia and Azerbaijan, Iran and the United Arab Emirates, India and Pakistan — sent up lower-level diplomats to deliver often overheated responses in real time.

Overheated isn't always productive; Tuesday night's U.S. presidential debate showed that. But the distance of technology created something new even for the United Nations, an organization known for its procedural, bureaucratic nature: a meeting almost entirely free of the natural energy generated when human beings charting the future of their planet get together to talk.

Not that the promise of technology wasn't front and center; talk of it dominated the week. A “Roadmap for Digital Cooperation” summit was held, and dozens of world leaders rhapsodized about how the magic of electronic networks — connections unthinkable when some of them were children — is helping offset the pandemic's cleaving effects for both those who run governments and those who are governed. 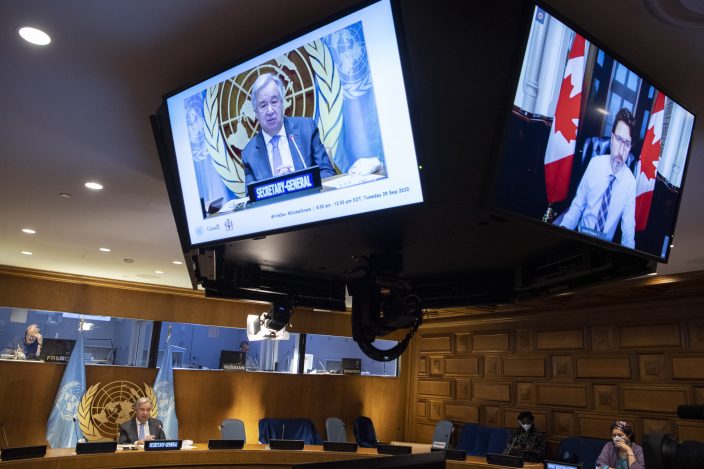 In this photo provided by the United Nations, Secretary-General Antonio Guterres, on screen at left, addresses a meeting on financing the 2030 Agenda for Sustainable Development in the era of COVID-19 during the 75th session of the United Nations General Assembly, Tuesday, Sept. 29, 2020, at UN headquarters in New York. (Eskinder DebebeUN Photo via AP)

Afghanistan's president, Ashraf Ghani, said his nation was “experimenting with how to adapt so that this digital revolution can be wielded as a source of economic opportunity” for younger people and a way to develop governance and law. He said 2020's blend of tech and circumstance was challenging Afghanistan to “adapt the ways we consume, the ways we work, and the ways we govern.”

Kersti Kaljulaid, the president of Estonia, calls her nation “the world's first digitally transformed state" — a place where all public services run online. Because of that, she said, when the pandemic hit “we saw less scramble than any other country to move everything online which previously ran on paper.”

"We want the same for the rest of the world," Kaljulaid said. But she also issued a warning — that technology without structure can make things worse. 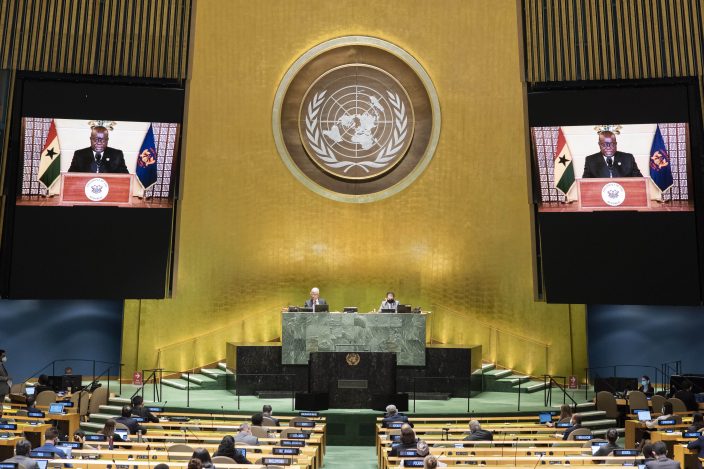 In this photo provided by the United Nations, the pre-recorded message of Nana Addo Dankwa Akufo-Addo, President of Ghana, is played during the 75th session of the United Nations General Assembly, Wednesday Sept. 23, 2020, at U.N. headquarters in New York. (Eskinder DebebeUnited Nations via AP)

“Leaders globally must understand that digital services do not, by themselves, rid any country from fat bureaucracy, corruption or inefficiency,” she said. “By digitalizing these problems, we can only make things worse, unless we simultaneously rise transparency and straighten out our processes.”

Through that lens, it becomes increasingly clear that the “information superhighway,” as it was called in the 1990s, has, in the coronavirus era, become more choked with traffic than ever.

“COVID has created an inflection point. Countries are starting to rethink how they connect with each other. It’s hard to imagine everything that has occurred over the last six months occurring five years ago," says William Muck, a political science professor and coordinator of global studies at North Central College in Naperville, Illinois.

“Tech is one way they see that they can solve problems and avoid political pitfalls," Muck says.

Perhaps. Speaker after speaker said it was time for the United Nations to be different, that the pandemic had handed it an opportunity to evolve. But this meeting suggested that for such an intricate bureaucracy, even adapting in an emergency may not be enough to jump-start genuine, irreversible innovation.

Despite that, hope peeks through. Thanks to technology, the people who rule us and, in the aggregate, steer humanity's destiny are still finding ways to talk — even if “talk," complete with air quotes, isn't quite what it used to be. That's what Volkan Bozkir thinks, at any rate.

“The fact that so many world leaders chose to address this assembly is a testament to the power and relevance of the United Nations," the president of the General Assembly said Tuesday evening as he pronounced the gathering closed. “No other organization can bring so many global leaders together.”

And with that, he thanked U.N. tech support for all its help with the prerecorded speeches and was on his way.

Ted Anthony, director of digital innovation for The Associated Press, has covered global affairs since 1995 and oversees the news organization’s coverage of the pandemic’s ripple effect on society. Follow him on Twitter at https://twitter.com/anthonyted

Artist Tracey Emin reveals she had operation for cancer

Carlos Dunlap has been traded from ...