So many in tennis love their annual French Open visit to the City of Lights for reasons that have nothing to do with tennis.

This year, though, because of the coronavirus pandemic — cases have been rising in France — players, coaches and others are not getting the chance to sightsee or stroll, eat at their favorite brasserie or enjoy a croissant at a sidewalk cafe during the 15-day tournament that ends Oct. 11.

Or as Karolina Pliskova, the No. 2-seeded woman at Roland Garros, lamented: “Maybe I miss, a little, shopping. But that can wait, I guess.” 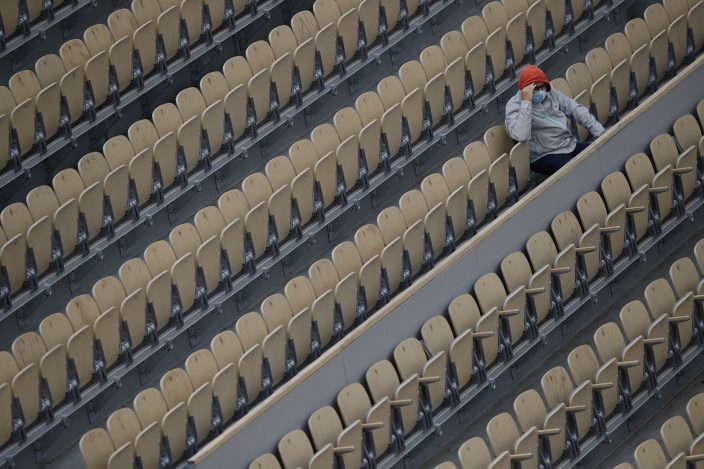 It has to. Because here is how the situation was described by 2014 Wimbledon doubles champion Vasek Pospisil, who recently teamed with Novak Djokovic to launch an association to represent players: “The only place you can go is the hotel.”

But that’s about it. They're essentially “stuck in the bubble,” in Pospisil's words — although it actually isn't really a bubble at all, at least not like those far stricter setups for the NBA and NHL postseasons, for example. 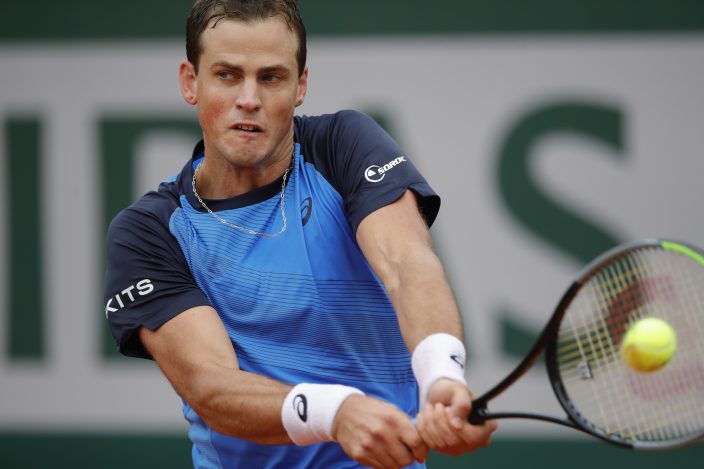 There are two official hotels in Paris, and players have noticed other folks being there despite no connection to the French Open, which British player Dan Evans said made him “a little nervous.”

“Anyone can kind of walk in,” said Mackie McDonald, the 2016 NCAA champion in singles and doubles for UCLA who lost to 12-time champion Rafael Nadal in the second round at Court Philippe Chatrier on Wednesday.

“When I arrived at the U.S. Open, it literally felt like you were escorted, and there was security right there. When I first arrived (in Paris), I got out of the car and I was expecting kind of the same thing ... and then there was no one there. I helped myself to the third floor,” McDonald said. “They even told me I could go to the grocery store before I quarantined, and I was like, ‘OK, I’m not going anywhere.’ So I just went straight to my room.” 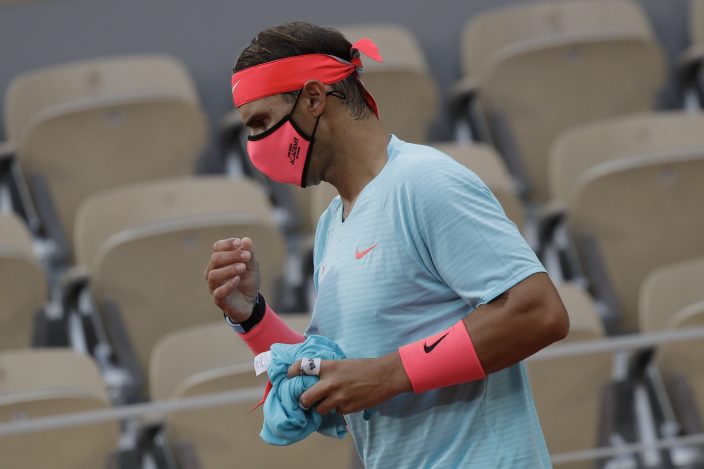 Spain's Rafael Nadal wears a face mask during a break in the first round match of the French Open tennis tournament against Egor Gerasimov of Belarus at the Roland Garros stadium in Paris, France, Monday, Sept. 28, 2020. (AP PhotoAlessandra Tarantino)

There wasn’t the option to rent a private home, the way Djokovic, Serena Williams and a handful of others did on Long Island for the U.S. Open, which ended Sept. 13.

And there wasn’t the option to stay at one’s own place, which Williams usually does in Paris, where she owns an apartment.

“It’s not easy, because you can’t even get fresh air. ... I don’t know what the reason is; if they didn’t have very much time to try to make the conditions better for players, more comfortable,” Pospisil said. “Obviously, some players are going to be here for two, three weeks.” 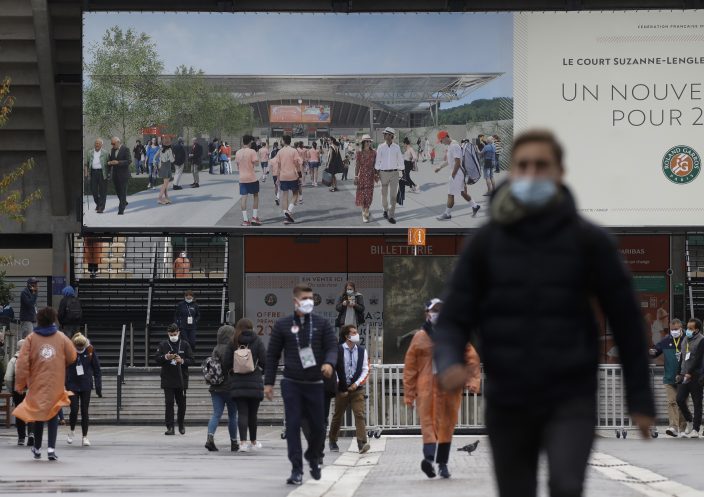 The image on a billboard of spectators with straw hats walking the sunny lanes of the Roland Garros grounds contrasts with the changed reality as spectators with face mask walk under damp and cold conditions during first round matches of the French Open tennis tournament at the Roland Garros stadium in Paris, France, Sunday, Sept. 27, 2020. (AP PhotoAlessandra Tarantino)

Dusan Lajovic, a Serbian man seeded 22nd, understands why the measures are in place but he does feel a touch of cabin fever.

“I would love to be able to go out, walk in a park or something like that,” Lajovic said, “but I’m in my room, watching movies, playing video games, reading books.”

In Pospisil’s eyes, not all Grand Slam bubbles — or, to use a more accurate term, “controlled environments” — are created equal. 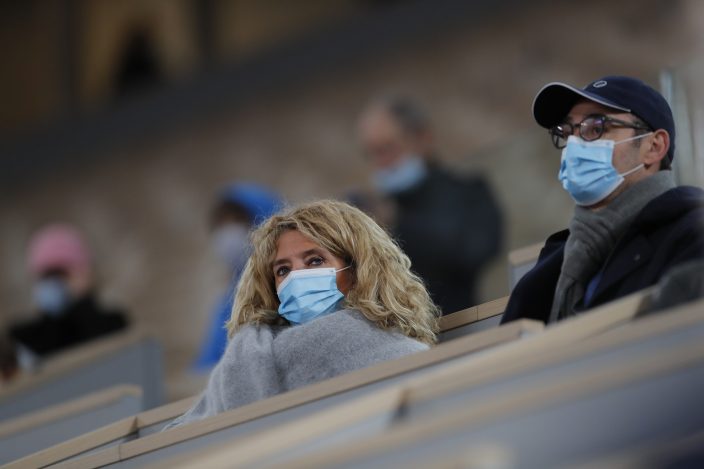 He called the setup at the French Open “much worse” than it was at the U.S. Open.

“The hotel we’re staying at, it’s tough. We don’t have anything. The U.S. Open, there was a much bigger effort, I felt, from the organization, to make the time in the bubble a little bit more comfortable for the players, that’s for sure," Pospisil said. "I mean, I think almost every player I’ve spoken to was sharing the same opinion.”

Unlike at Flushing Meadows, where all fans were banned because of COVID-19 concerns, there are 1,000 spectators allowed per day at Roland Garros.

That’s why players are encouraged to stay away from the tournament grounds unless they’re competing.

But they’re not barred from showing up.

Canadian doubles player Gaby Dabrowski described the guidance this way: “If you have to come on-site, it's understandable, but if you don't, maybe don't come during the busiest hours. It's more about making conscious decisions about that.”

U.S. Open champion and two-time French Open runner-up Dominic Thiem sat in one of the thousands of empty seats in Court Philippe Chatrier to watch Djokovic play this week.

“If you want to get a racket strung or turn in your laundry or do things like that, it’s all here,” American Sam Querrey said after losing his first-round match.

“So it’s basically impossible not to come here on days you’re not playing. But I think everyone’s responsible. ... Yesterday, I came here real quick, went in the locker room, turned in my laundry, quickly got in a car, went to the practice site, came back, showered, grabbed a quick bite and left,” Querrey said. “No one’s lingering around.”