BEIJING — Tens of millions of Chinese are traveling during the combined National Day and Mid-Autumn Festival holidays, amid continued masking and other safety requirements aimed at preventing new virus outbreaks in a country that has seen no cases of local transmission in more than a month.

Fewer trips are expected, however, out of concern restrictions could be reimposed if new outbreaks occurred.

In Beijing, students and teachers are advised not to leave the city to ensure classes resume smoothly after the break. Partly to compensate, movie theaters and tourist attractions in the capital are being allowed to operate at 75% capacity. China has the world’s second-largest box office and movie-going is a major holiday activity. 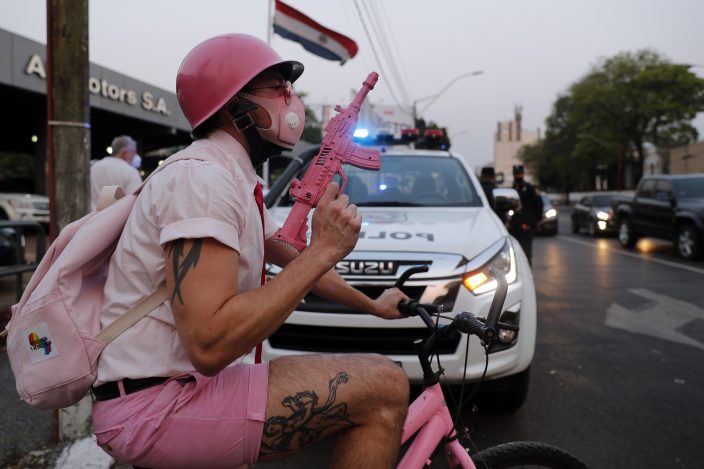 Holding a toy machine gun and wearing a mask to curb the spread of the new coronavirus, a gay man perfoms for peace in front of a police car during a LGTBI Pride caravan in Asuncion, Paraguay, Wednesday, Sept. 30, 2020. LGTBI organizations celebrated their Pride day with a caravan of vehicles because of the ongoing COVID-19 pandemic. (AP PhotoJorge Saenz)

Chinese usually travel abroad during the October holidays, but this year about 40% of the population is expected to make trips within the country. 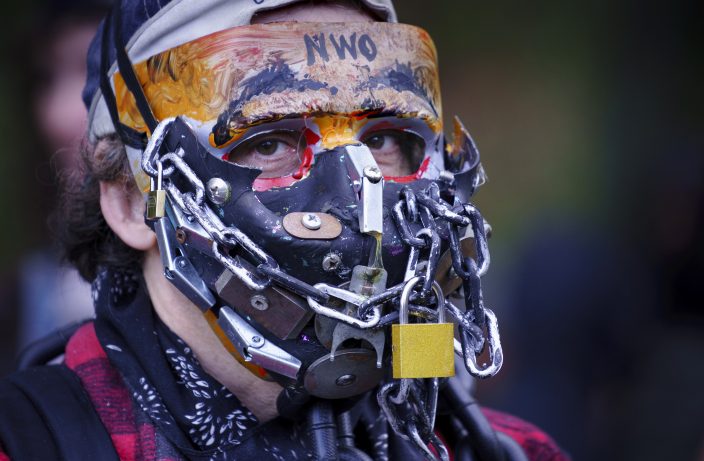 A man takes part in an anti-mask rally during the coronavirus pandemic in Montreal, on Wednesday, Sept. 30, 2020. Paul ChiassonThe Canadian Press via AP)

— Study: Neanderthal genes may be liability for COVID patients

— British lawmakers have renewed the government’s sweeping powers to impose emergency restrictions to curb the coronavirus. But many criticized the way Prime Minister Boris Johnson’s Conservative administration has used the powers 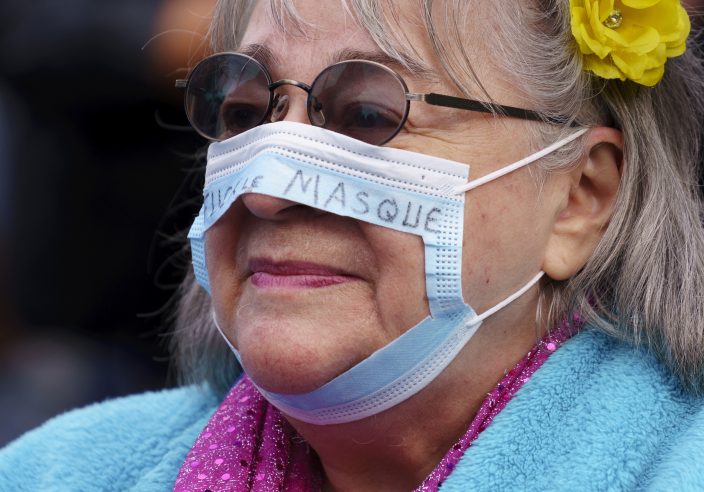 A woman takes part in an anti-mask rally during the coronavirus pandemic in Montreal, on Wednesday, Sept. 30, 2020. (Paul ChiassonThe Canadian Press via AP)

— House Speaker Nancy Pelosi and Treasury Secretary Steven Mnuchin have wrapped up an “extensive conversation” on a huge COVID-19 rescue package. The face-to-face meeting Wednesday was a last-ditch effort to seal a tentative accord on an additional round of coronavirus relief before Election Day.

— NBA Commissioner Adam Silver reiterates the league’s hope is to begin next season with teams in their home arenas and with fans in the seats, though cautioned that there are still numerous unknowns to work through before any plan can be finalized. 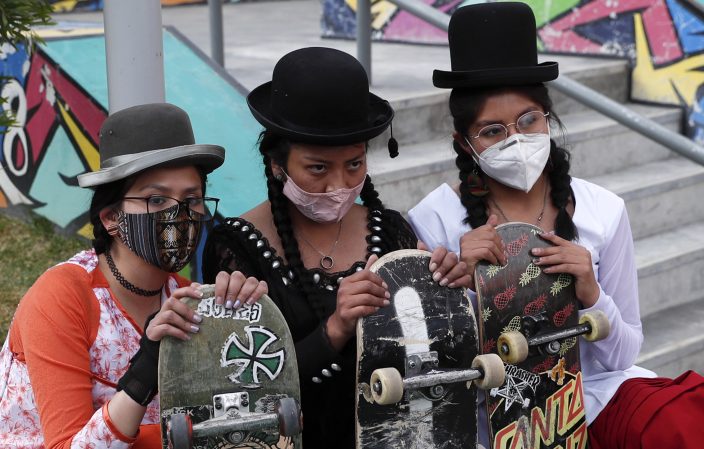 Yanira Villarreal, left, Ayde Choque, center, and Milenda Limachi, wearings masks amid the COVID-19 pandemic and dressed as a "Cholita" pose for a photo with their skateboards during a youth talent show in La Paz, Bolivia, Wednesday, Sept. 30, 2020. Young women called "Skates Imillas," using the Aymara word for girl Imilla, use traditional Indigenous clothing as a statement of pride of their Indigenous culture while playing riding their skateboards. (AP PhotoJuan Karita)

NEW DELHI — India has reported 86,821 new coronaviruses cases and another 1,181 fatalities, making September its worst month of the pandemic.

The Health Ministry’s update raises India’s total to more than 6.3 million and 98,678 dead. India added 41% of its confirmed cases and 34% of fatalities in September alone. 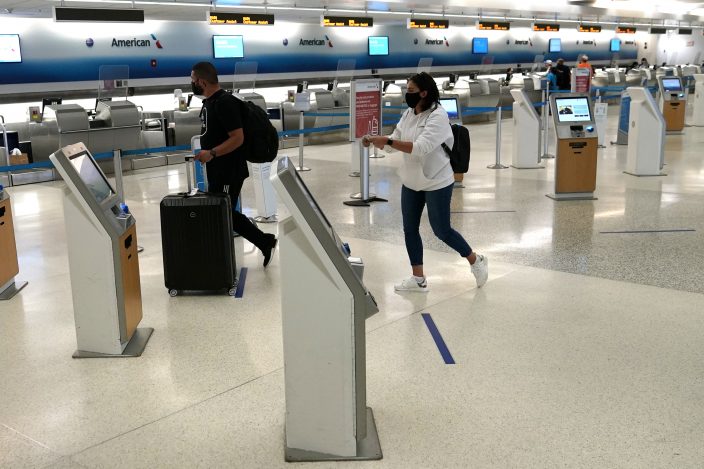 Passengers walk through a largely empty check-in area for American Airlines at Miami International Airport during the coronavirus pandemic, Wednesday, Sept. 30, 2020, in Miami. The airline industry has been decimated by the pandemic. The Payroll Support Program given to the airlines as part of the CARES Act runs out Thursday. (AP PhotoLynne Sladky)

India is expected to become the pandemic’s worst-hit country within weeks, surpassing the United States, where more than 7.2 million people have been infected.

The government announced further easing of restrictions Oct. 15. Cinemas, theaters and multiplexes can open with up to half of seating capacity, and swimming pools can also be used by athletes in training.

The government also said India’s 28 states can decide on reopening of schools and coaching institutions gradually after Oct. 15. However, the students will have the option of attending online classes.

International commercial flights will remain suspended until Oct. 31. However, evacuation flights will continue to and from the United States, Britain, Australia, Canada, France, Japan and several other countries.

WASHINGTON — Federal health officials are extending the U.S. ban on cruise ships through the end of October amid reports of recent outbreaks of the new coronavirus on ships overseas.

The Centers for Disease Control and Prevention announced Wednesday that it was extending a no-sail order on cruise ships with the capacity to carry at least 250 passengers.

The CDC said surveillance data from March 1 through Sept. 29 shows at least 3,689 COVID-19 or COVID-like illnesses on cruise ships in U.S. waters, in addition to at least 41 reported deaths. It said these numbers are likely an underestimate.

It cited recent outbreaks as evidence that cruise ship travel continues to transmit and amplify the spread of the novel coronavirus, even when ships sail at reduced passenger capacities. It said it would likely spread the infection in the U.S. communities if operations were to resume prematurely.

“Recent passenger voyages in foreign countries continue to have outbreaks, despite cruise ship operators having extensive health and safety protocols to prevent the transmission of SARS-CoV-2 on board and spread to communities where passengers disembark,” the CDC said in a statement.

The tiny city-state last month welcomed visitors from Brunei and New Zealand, and is cautiously reopening its borders after a virus closure to help revive its airport, a key regional aviation hub.

The aviation authority has said there is a low risk of virus importation from the two countries. Travelers must undergo a virus swab test upon arrival, travel on direct flights without transit and download a mobile app for contact tracing.

The Vietnam and Australia changes start from Oct. 8.

Singapore’s move is unilateral and not reciprocated by the other four countries.

But Transport Minister Ong Ye Kung said in a Facebook post Wednesday that “with each step of safe opening of our borders, we start to rebuild the bridges and resuscitate Changi Airport.”

Singapore has managed to control the pandemic after an earlier upsurge due to infections among foreign workers living in packed dormitories. It has confirmed more than 57,000 cases of infection with 27 deaths from COVID-19.

SEOUL, South Korea -- South Korea has reported 77 new cases of the coronavirus as officials called for citizen vigilance amid one of the biggest holidays of the year.

The figures released by the Korea Disease Control and Prevention Agency Thursday brought the national caseload to 23,889, including 415 deaths.

Fifty-four of the new cases were reported from the densely populated Seoul metropolitan area, which has been at the center of a viral resurgence since mid-August. Ten of the new cases were tied to international arrivals, mostly passengers from Asian countries such as India, Uzbekistan, and Indonesia.

Health Minister Park Neung-hoo during a virus meeting Wednesday repeated a plea for people to stay home during the Chuseok harvest holiday that continues through the weekend, calling it a critical period may determine whether or not the country sees a major outbreak in autumn.

The mayor of a western Arizona tourist destination on Monday lifted a citywide mask mandate originally ordered in July requiring facial coverings indoors when social distancing was not possible. The News-Herald reported that Lake Havasu City Mayor Cal Sheehy suspended the mandate on Monday after it was extended twice.

SALT LAKE CITY — A new audit finds a multimillion-dollar coronavirus-testing contract the state of Utah signed with a startup company ended up costing significantly more per test because fewer people than expected took the tests.

The audit released Wednesday found the agreement with Nomi Health was for a flat fee and didn’t have a way to scale back if the number of tests was lower than planned. The company has similar contracts in Iowa and Nebraska.

The state said it was reviewing the audit. Nomi didn’t immediately comment on the findings, which were part of a wide-ranging review of state spending in its response to the pandemic.

ATLANTA — Georgia’s governor is again extending his emergency rules regarding COVID-19 as the state surpasses 7,000 deaths from the respiratory illness.

Gov. Brian Kemp on Wednesday extended the underlying state of emergency that allows him to issue other orders until Nov. 9. The Republican pushed back the expiration of pandemic rules and guidelines until Oct. 15.

Georgia has recorded more than 318,000 cases of coronavirus overall. The state’s seven-day average of new cases has fallen below 1,200 a day. Georgia ranks 24th nationwide for new cases per capita in the last two weeks. It once was worst.

One complicating factor is the increasing usage of rapid antigen tests, which aren’t yet recorded in state figures. Department of Public Health spokesperson Nancy Nydam says the state has recorded more than 28,000 positives from those tests, but they are not yet routinely published.

UNITED NATIONS — The United Nations chief and leaders from governments, the private sector, civil society and international organizations are pledging support for a global initiative to increase access to COVID-19 tests, treatments and vaccines, especially for developing countries.

At a virtual high-level event Wednesday on the sidelines of the U.N. General Assembly’s annual meeting of world leaders, 16 major pharmaceutical companies promised to work with the Bill & Melinda Gates Foundation to scale up manufacturing and ensure all countries have access to affordable COVID-19 tests, therapies and vaccines.

Johnson & Johnson CEO Alex Gorsky announced the company will allocate up to 500 million doses of its COVID vaccine, if it’s proven safe and effective, around the middle of next year for developing countries. Late-stage testing of the vaccine began last week.

U.N. Secretary-General Antonio Guterres has urged the international community to provide $35 billion to fund planned efforts by the Access to COVID-19 Tools Accelerator. About $15 billion of that is needed by year’s end to fund research, manufacturing, purchase of medicines and vaccines, and distribution.

The ACT-Accelerator was launched five months ago by the World Health Organization, European Commission, France, and the Bill & Melinda Gates Foundation. It has a goal of producing 2 billion vaccine doses, 245 million COVID treatments, and 500 million tests, and distributing them in low- and middle-income countries.

More than 86 million Americans hav ...

The Latest: UN: Over 2 million virus cases in just 1 week

The Latest: Sri Lanka closes harbors after spike in cases