DJ LeMahieu's tiebreaking single in the ninth inning off Cleveland closer Brad Hand sent the New York Yankees into the AL Division Series with a wild 10-9 win over the Indians early Thursday in a rain-delayed Game 2 that started in September and ended in October.

At 4 hours, 50 minutes — even without the delays — it was the longest nine-inning game (regular season or postseason) in major league history, ending after 1 a.m.

“I don’t know how you top that one — the back and forth, the amount of big plays,” Yankees manager Aaron Boone said. "Tonight just had that feeling that these guys weren’t going to be denied. They weren’t going to lose.” 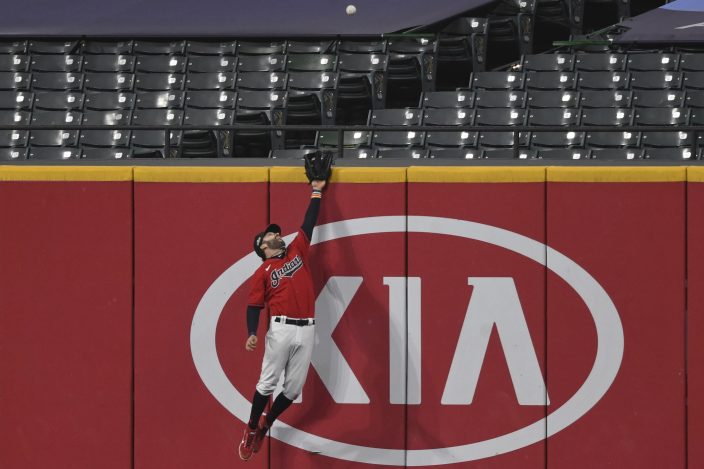 The Yankees will play rival Tampa Bay in a best-of-five Division Series next week in San Diego. New York went 2-8 during a testy season series with the top-seeded Rays, who won the AL East by seven games over the second-place Yankees.

“They’ve been the best team in our league all year, so we’re excited to play the best team and hopefully can have our way with them,” Boone said.

LeMahieu, the AL batting champion during the shortened, 60-game regular season, grounded his hit into center field to score Gio Urshela, who hit a go-ahead grand slam earlier and made a huge defensive play at third base. 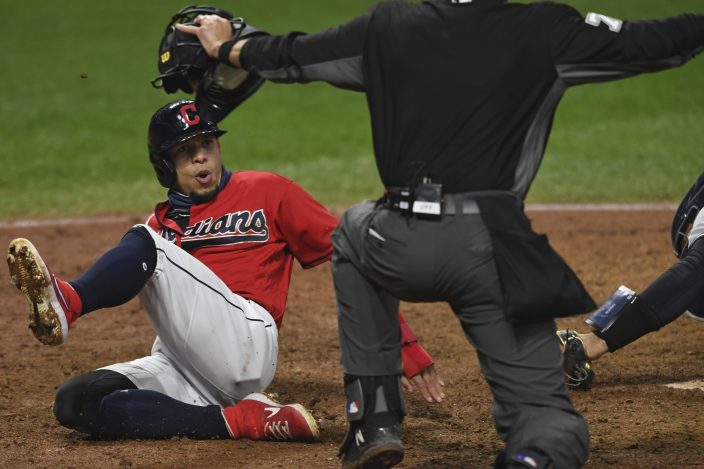 “That was one of the best games I’ve played in my life,” Urshela said.

Down 9-8, the Yankees tied it in the ninth on Gary Sánchez's sacrifice fly off Hand, who went 16 of 16 on save tries during the season.

The Yankees stumbled into the playoffs. But their heavy-hitting lineup got rolling over two nights in chilly, mostly empty Progressive Field. New York pounded Cleveland ace Shane Bieber in the opener and now the Yankees, who hit seven homers in the two games, have found their swing as the calendar flips to the month that defines them. 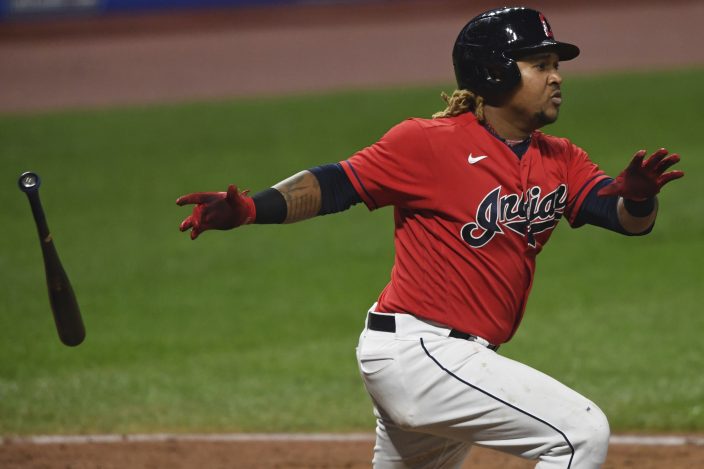 “We probably caught people’s attention,” Boone said. “We haven’t done anything yet. This was just a stepping stone.”

Aroldis Chapman got the last six outs for the Yankees, aided by a spectacular play from Urshela at third base to begin an inning-ending double play that kept it a one-run game in the eighth. The Indians got the tying run to first in the ninth on a strikeout passed ball with two outs before Chapman struck out pinch-hitter Austin Hedges.

The Yankees rejoiced in the dugout but didn't celebrate on the field — they simply lined up and bumped fists. For the Indians, a season of adversity ends with more heartache. They twice rallied to tie the Yankees and took the lead in the eighth on César Hernández's bloop RBI single off Chapman only to have Hand give it away.

Cleveland, which hasn't won the World Series since 1948, has lost eight straight postseason games and dropped 10 consecutive elimination games stretching back to the 1997 Series.

Sánchez, benched in Game 1, had a two-run homer and Giancarlo Stanton connected on a solo shot for New York, which was down 4-0 in the first.

The Yankees were two different teams this season as they played much better at home in the Bronx than on the road, going 11-18.

They entered this expanded postseason as a No. 5 seed and not scaring anyone, but now they've got momentum.

“When we’re right,” Boone said before Game 2, “it doesn’t matter where we are.”

Down 8-6 and their postseason in jeopardy of a quick ending, the Indians tied it in the seventh on pinch-hitter Jordan Luplow's two-out, two-run double off right-hander Jonathan Loaisiga following a gutty move by Indians acting manager Sandy Alomar Jr.

With two on, Alomar, who has filled in most of the season while Terry Francona deals with health issues, sent Luplow to the plate instead of Josh Naylor, who became the first player in major league history to get five hits in his first five postseason plate appearances.

Luplow smoked a ball to center that went over Aaron Hicks' head and brought in two to tie it, sending Cleveland's bench into a frenzy.

A two-time All-Star, Sánchez was benched for the opener after hitting .147 over 60 games, and he batted ninth for the first time in his career in Game 2.

But he rewarded Boone's faith by connecting in the sixth inning off Indians rookie Triston McKenzie with a wind-aided shot to right that barely cleared the wall and snapped a 6-all tie.

Before the game, Boone said he was playing Sánchez because "I know the impact he can have with certainly one swing.”

The Indians will now head into an offseason of uncertainty.

All-Star shortstop Francisco Lindor went 1 for 8 in the series and may have played his last game in Cleveland The Indians have him under contract for one more season, but he's turned down several offers and the club may have no choice but to trade him before he's a free agent.

Trailing 6-4, the Indians chased Yankees starter Masahiro Tanaka and tied it in the fifth on Jose Ramirez's two-run double — his 14th straight hit for extra bases.

The Yankees had rallied from a 4-0 deficit to take a 5-4 lead in the fourth on Urshela's grand slam, which looked as if it might haunt Cleveland fans for years.

Urshela, who started at third base for the Indians in the 2017 postseason against the Yankees, connected off reliever James Karinchak after Alomar pulled starter Carlos Carrasco with the bases loaded.

Alomar wasn't taking any chances and pulled the right-hander for Karinchak, a quirky reliever who warms up to “Wild Thing" and wears No. 99 after the fictional Ricky Vaughn character in “Major League.”

The move backfired as Urshela blasted a 3-2 pitch onto the tarp-covered bleachers in left.

Depending on what happens with Francona, Alomar could be Cleveland's next manager. The former Indians All-Star catcher has been a managerial candidate elsewhere in the past, but never felt any of the opportunities were genuine.

“Some of the interviews were, to me, token interviews,” he said.

He gained valuable experience while filling in for Francona this season, but Alomar said he's not campaigning to manage.

“I don’t need the job. I’m good and set in my life,” he said. “If somebody’s interested, they can call and we’ll talk. But it’s not like I’m pushing myself or promoting myself to be a manager, no. I don’t have any hidden agendas, let’s put it that way.”

Indians: C Roberto Pérez left with a bruised right hand after being hit during an at-bat in the seventh.

Yankees: Some rest before the ALDS begins on Monday.