At first blush it doesn’t make a lot of sense to force NFL coaches to mask up on the sidelines when dozens of players with no similar virus protection are crashing into each other nearby.

That’s what Jon Gruden and Sean Payton must have been thinking when they coached on national television with their masks pulled down. Both made a conscious decision to violate league rules, with little regard to the bad optics involved.

Raiders quarterback Derek Carr and a few teammates made that same decision when they went into an overcrowded room at a country club earlier this week without masks. The appearances were for a good cause — tight end Darren Waller’s charity — but there’s nothing good about the message Carr sent when video of the event showed him not only maskless but in close contact with people who, unlike him, aren’t tested every day. 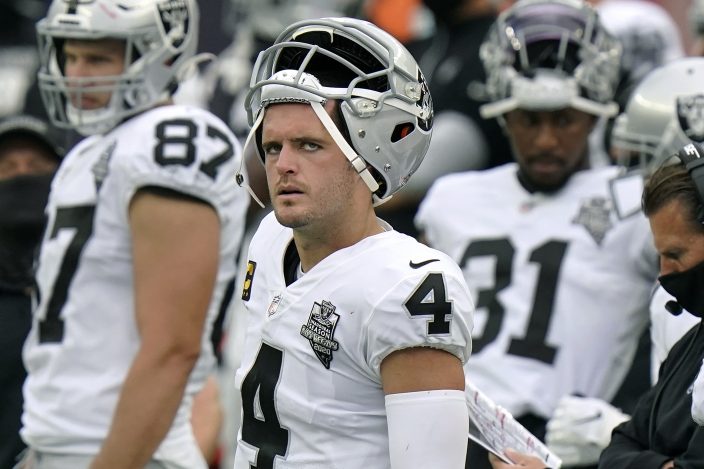 Las Vegas Raiders quarterback Derek Carr watches from the sideline in the second half of an NFL football game against the New England Patriots, Sunday, Sept. 27, 2020, in Foxborough, Mass. (AP PhotoSteven Senne)

Gruden and Payton got $100,000 fines and the threat of even harsher penalties if they do it again. Carr should pay, too, even if he claimed he wasn’t trying to make a statement about masks.

“I feel like we’ve done a fantastic job around here, and I hate that a few moments without our masks on led to a story about our team and all this kind of stuff,’’ Carr said Wednesday.

The problem with that kind of logic is that those few moments could lead to more than a story. Video from the charity outing showed Carr mingling with people around the room, seemingly oblivious to the fact that some of them could conceivably have COVID-19.

Las Vegas Raiders head coach Jon Gruden adjusts his protective mask along the sideline in the second half of an NFL football game against the New England Patriots, Sunday, Sept. 27, 2020, in Foxborough, Mass. (AP PhotoSteven Senne)

What if Carr or one of his teammates was infected at the gathering? What if he brought it back to his team this week?

What about the Buffalo Bills, who play the Raiders on Sunday? What should they think?

The bottom line is that without a lot of protocols — and mask wearing is at the top of the list — there would be no NFL season. And appearances matter, whether they’re on the sidelines of a game or in the dining room of a country club in a Las Vegas suburb.

The NFL is trying desperately to play without a bubble, no easy task with a virus that plays no favorites. That came into even more focus this week when the first wave of positive in-season NFL virus tests hit in Tennessee, forcing the postponement of Sunday’s game between the Titans and Steelers.

That the NFL got through three weeks of the season without positive tests was amazing all by itself. It’s testament to both the league’s organizational prowess and the strict way it enforces regulations put in place to keep the virus off the field and out of the locker room.

But now there’s an outbreak in Tennessee. There are public mask violators in New Orleans and Las Vegas.

And now you need to wonder. Can the NFL really expect some 3,000 players, coaches and other personnel — many of them thinking they’re bulletproof in their 20s — to play by the rules for at least three more months?

Probably not without some added incentive, which is why Gruden and Payton had to pay such stiff fines. The NFL wanted to send a message, though it didn’t seem to get across to Carr and the 10 or so teammates who joined him at the indoor charity event.

If that’s not enough, the league warned Wednesday that future punishments could include both suspensions and the loss of future draft picks — something that will surely get the attention of those involved.

“While we saw significant progress in Week 3 with compliance from club personnel, wearing of protective equipment is still not universal,’’ NFL operations chief Troy Vincent said in a memo sent to all 32 teams. ”And this lack of compliance creates unnecessary risk to game-day participants.”

The NFL isn’t exactly running scared, but it should be worried. The season hangs in the balance, and how it responds to the outbreak in Tennessee and the protocol violations will likely determine whether it all gets played.

Gruden on Wednesday said the players made a mistake by not wearing their masks, though he was careful not to criticize them. How could he, after spending three hours in primetime last week barking at players and into his headset with his mask down below his chin?

“They’re aware of their mistake,’’ Gruden said. ”But we’ve done an excellent job of using our manners, taking proper care of each other.”

Gruden is wrong, of course, and he should know better. He revealed after the Monday night opener in Las Vegas that he had COVID-19 during the summer, though he didn’t say how sick he was.

Wearing a mask isn’t that hard, as we’ve all found in recent months. It isn’t even that uncomfortable.

Either wear one or find something else to do the rest of the year.

Huawei sales up, but growth slows under virus, US press ...

Chinese tech giant Huawei, one of ...