A prominent Belarus opposition figure and an imprisoned Iranian human rights lawyer on Thursday were awarded the Right Livelihood Award, sometimes referred to as the “Alternative Nobel,” together with activists from Nicaragua and the United States.

Ole von Uexkull, the head of the Swedish Right Livelihood Foundation behind the prize, said that it “highlights the increasing threats to democracy globally. It is high time that all of us supporting democracy around the world stand up and support each other.”

The foundation cited 58-year-old human rights activist Ales Bialiatski and the non-governmental organization Human Rights Center Viasna which he heads, “for their resolute struggle for the realization of democracy and human rights in Belarus.” 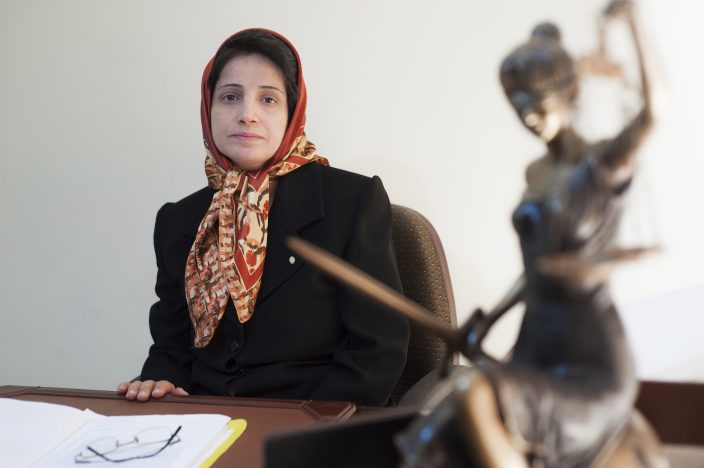 FILE - In this Nov. 1, 2008 file photo, Iranian human rights lawyer Nasrin Sotoudeh, poses for a photograph in her office in Tehran, Iran. The imprisoned Iranian human rights lawyer Nasrin Sotoudeh and the prominent Belarus opposition figure Ales Bialiatski have been awarded the 2020 Swedish Right Livelihood Award, sometimes referred to as the “Alternative Nobel,” along with activists from Nicaragua and the United States. (AP PhotoArash Ashourinia, File)

In 2014, Bialiatski was released nearly three years into his prison sentence, ahead of schedule. He was convicted of tax evasion and sentenced to 4 ½ years in prison in November 2011. Western governments criticized the trial as politically vindictive.

Bialiatski was nominated for the Nobel Peace Prize in 2012 and received an array of international awards while imprisoned. His group has provided legal assistance to thousands of Belarusians arrested or imprisoned for challenging President Alexander Lukashenko’s rule.

Iranian lawyer Nasrin Sotoudeh, who has defended activists, opposition politicians and women prosecuted for removing their headscarves, was given the award “for her fearless activism, at great personal risk, to promote political freedoms and human rights in Iran.”

Earlier this month, Sotoudeh was transferred from a prison cell to a hospital north of Tehran following a hunger strike for better prison conditions and the release of political prisoners amid the pandemic. She has since ended her hunger strike that began in mid-August.

The 57-year-old Sotoudeh was arrested in 2018 on charges of collusion and propaganda against Iran’s rulers and eventually was sentenced to 38 years in prison and 148 lashes.

Created in 1980, the annual Right Livelihood Award honors efforts that the prize founder, Swedish-German philanthropist Jakob von Uexkull, felt were being ignored by the Nobel prizes.

The foundation also gave its 2020 award to Milton, Delaware-born U.S. civil rights lawyer Bryan Stevenson, 60, “for his inspiring endeavor to reform the U.S. criminal justice system and advance racial reconciliation in the face of historic trauma.”

The fourth winner was 61-year-old rights and environmental activist Lottie Cunningham Wren of Nicaragua “for her ceaseless dedication to the protection of indigenous lands and communities from exploitation and plunder.”

The winners will each receive prize money of 1 million kronor ($110,100) and will be honored during a virtual award ceremony on Dec. 3.

Jan M. Olsen in Copenhagen, Denmark, contributed to this report.

The Philadelphia 76ers are in adva ...