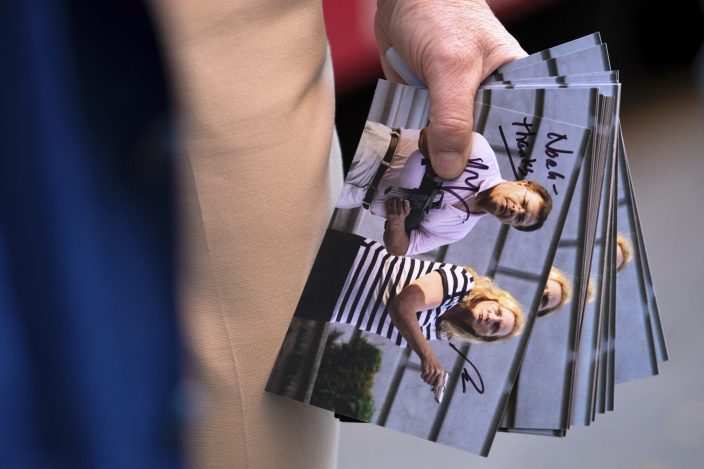 St. Louis-based lawyer Patricia McCloskey holds a photo autographed by herself and her husband, Mark, before giving it to a fan during an appearance on behalf of the Trump campaign in downtown Scranton, Pa., Wednesday, Sept. 30, 2020. The McCloskeys received national attention in June when they pulled guns on Black Lives Matter protesters who broke into their gated community and marched past their home. The McCloskey's brought a stack of copies of the now famous photo to autograph and give away to their supporters. (Christopher DolanThe Times-Tribune via AP)

LOOKING FOR AMERICA-APPALACHIA — AP reporters have hit the road wanting to look at the issues that have exploded onto the national consciousness this year. First stop: the Appalachian foothills of southeast Ohio, looking for the echoes of a President Lyndon Johnson speech and the Great Society. It’s a region that has barely felt COVID-19 and protests for racial justice. Many people here view the rest of America from a distance as a place only explained with suspicion, anger and sometimes conspiracy theories. By Tim Sullivan. SENT: 3,150 words, photos, video. An abridged version of 980 words is also available.

A customer sits at a table spaced for proper social distancing while having lunch at Katz's Delicatessen, Wednesday, Sept. 30, 2020, in New York. The city on Wednesday began allowing restaurants to offer indoor dining at 25 percent capacity.(AP PhotoMary Altaffer)

ELECTION 2020-DEBATE-VOTERS — While President Donald Trump and Democrat Joe Biden debated, Americans cringed. In interviews with voters across key states, nearly all who watched recoiled from it. None said it would change their minds on how they planned to vote. By Michelle L. Price. SENT: 870 words, photos. 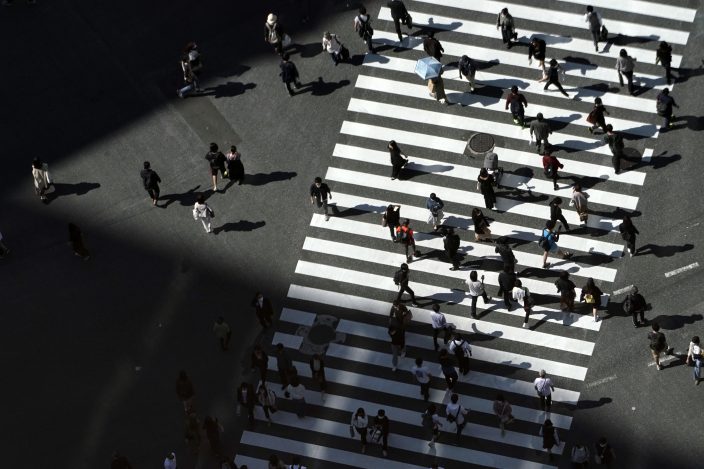 VIRUS OUTBREAK — An ambitious humanitarian project to deliver coronavirus vaccines to the world’s poorest people is facing potential shortages of money, cargo planes, refrigeration and vaccines themselves — and running into skepticism even from some of those it’s intended to help most. In one of the biggest obstacles, rich countries have locked up most of the world’s potential vaccine supply through 2021, and the U.S. and others have refused to join the project, called Covax. By Maria Cheng and Lori Hinnant. SENT: 1,120 words, photos.

MALAYSIA-US-PALM-OIL — Malaysian palm oil producer FGV Holdings Berhad vows to “clear its name” after the U.S. banned imports of its palm oil over allegations of forced labor and other abuses. The U.S. Customs and Border Protection’s Office of Trade issued the ban order against FGV, saying it found indicators of forced labor, including concerns about children, along with other abuses such as physical and sexual violence. By Eileen Ng. SENT: 590 words, photos.

RACIAL JUSTICE-FUNDING THE POLICE — The racial justice protests following the death of George Floyd earlier this year prompted calls to “defund the police” in cities across the country, a priority for activists that has now become a central point in the presidential contest. A review by The Associated Press finds that while local governments have trimmed police budgets over the past four months, the cuts have been mostly modest. They have been driven as much by shrinking government revenue related to the coronavirus pandemic as from the calls to rethink public safety. By Geoff Mulvihill. SENT: 1,110 words, photos. 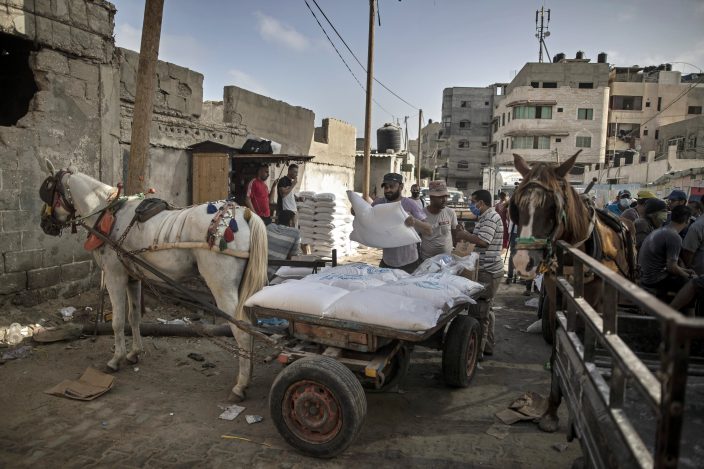 A Palestinian man loads a horse cart with sacks of flour received from the UN Relief and Works Agency, (UNRWA), at a warehouse in Gaza City, Wednesday, Sept. 30, 2020. (AP PhotoKhalil Hamra)

GERMANY-RUSSIA-NAVALNY — Russian opposition leader Alexei Navalny, who is recovering in Germany after being poisoned in Russia by a nerve agent, accused Russian President Vladimir Putin of being behind the attack. Navalny’s supporters have frequently maintained that such an attack could have only been ordered at the top levels, though the Kremlin has steadfastly denied any involvement in it. SENT: 460 words, photos.

ELECTION 2020-TRUMP-MONEY — Trump has been talking up heaps of federal aid that are flowing to key constituency groups in the leadup to the November election. But he rarely mentions Congress’ role in the appropriation of those dollars. By Aamer Madhani. SENT: 990 words, photo. 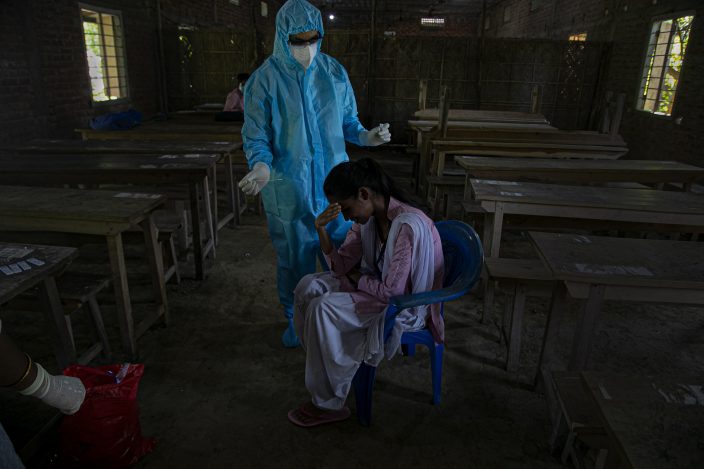 A reluctant student gestures hesitantly before a health worker takes her nasal swab sample to test for coronavirus after classes started at a college in Jhargaon village, outskirts of Gauhati, India, Wednesday, Sept. 30, 2020. India's Health Ministry on Wednesday raised its confirmed total of coronavirus cases to more than 6.2 million. (AP PhotoAnupam Nath) 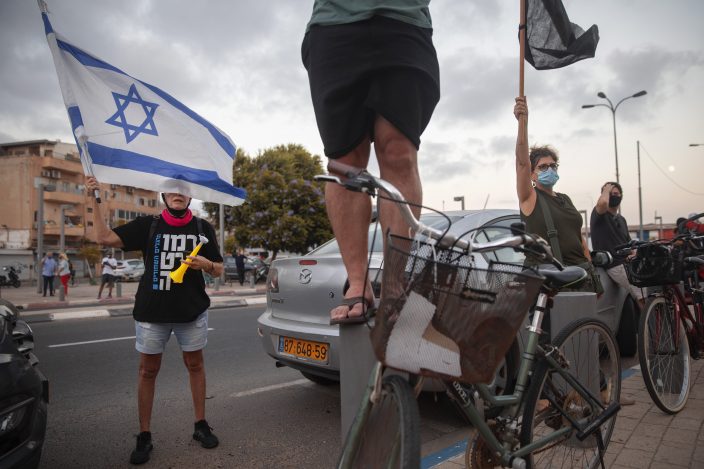 Israeli protesters wave flags and chant slogans during a demonstration against parliament's plans to ban them from protesting during the current nationwide lockdown due to the coronavirus pandemic, in Tel Aviv, Israel, Tuesday, Sept. 29, 2020. The protesters accuse Prime Minister Benjamin Netanyahu of exploiting the coronavirus crisis in order to stop weeks of demonstrations against him. (AP PhotoOded Balilty)

ELECTION 2020-TRUMP-RACE — Trump tries to walk back his refusal to outright condemn the far right Proud Boys during the presidential debate, but the inflammatory moment was far from the first time he has failed to denounce white supremacists or has promoted racist ideas. SENT: 1,060 words, photos, video.

ELECTION 2020 — Trump and Biden continue their debate-stage clash from afar as they compete for working-class voters in the Midwest and elected officials in both parties — and the debate commission — try to deal with the most chaotic presidential faceoff in memory. SENT: 1,100 words, photos, video.

VIRUS-OUTBREAK-SCHOOLS-VIRUS-TESTS — The two largest school districts in the U.S. are rolling out ambitious and costly plans to test students and staff for the coronavirus, bidding to help keep school buildings open amid a rise in infections among the nation’s school-age children. SENT: 980 words, photos.

VIRUS OUTBREAK-VIRAL QUESTIONS-AEROSOLS — Can the coronavirus travel more than 6 feet in the air? Research indicates it can. SENT: 220 words, graphic.

CONGRESS-GOVERNMENT-FUNDING — Trump signs a bill to fund the government through Dec. 11, averting the possibility of a government shutdown when the new fiscal year starts. SENT: 340 words, photos.

WESTERN-WILDFIRES-BABY-YODA — Beleaguered firefighters in the western United States have a new force on their side: Baby Yoda. SENT: 600 words, photos. With CALIFORNIA-WILDFIRES — California wildfire evacuees return home to find devastation.

REFUGEES-IN-LIMBO The Trump administration has proposed further slashing the number of refugees the United States accepts to a new record low in the coming year. SENT: 750 words, photos. With VISA-LOTTERY-WINNERS — Judge’s order leaves many visa lottery winners out of luck.

CHINA-DOMESTIC-TRAVEL — Travel restrictions due to the coronavirus pandemic mean millions of Chinese tourists will instead travel within the country during the National Day holidays. SENT: 730 words, photos. With HONG-KONG-CHINA-NATIONAL-DAY — Hong Kong police patrol against protests on China holiday.

HONDURAS-MIGRANTS — Hundreds of migrants began walking from a city in northern Honduras toward the Guatemala border, testing a well-trod migration route now in times of the novel coronavirus. SENT: 590 words, photos.

JAPAN-STOCK-EXCHANGE-OUTAGE — Investors in Japan and elsewhere were left scratching their heads after trading on the Tokyo Stock Exchange, the world’s third largest by market value, was halted for the day due to a technical failure. By Business Writers Yuri Kageyama and Elaine Kurtenbach. SENT: 380 words, photos. With FINANCIAL-MARKETS — Tokyo trading stops over system failure, China on holiday.

AIRLINES-JOBS — American Airlines and United Airlines say they will begin to furlough 32,000 employees after lawmakers and the White House failed to agree on a broad pandemic relief package that includes more federal aid for airlines. By Airlines Writer David Koenig. SENT: 820 words, photo.

GOOGLE-EVENT — Google will try to make a bigger splash in the smartphone market with a cheaper high-end model while it also aims to expand its presence on bigger screens with a new TV service. By Technology Writer Michael Liedtke. SENT: 580 words, photo.

CONGRESS-FAA-BOEING — The head of the Federal Aviation Administration has piloted one of Boeing’s grounded 737 Max planes and says he likes what he saw. By Airlines Writer David Koenig. SENT: 690 words, photos.

TIM DAHLBERG-NFL VIRUS — The bottom line is that without a lot of protocols — and mask wearing is at the top of the list — there would be no NFL season. And appearances matter, whether they’re on the sidelines of a game or in the dining room of a country club in Las Vegas. By Sports Columnist Tim Dahlberg. SENT: 810 words, photos.

Loaded No. 21 USC grateful to be in Pac-12 title chase

Southern California and the Pac-12 ...

Artist Tracey Emin reveals she had operation for cancer