The unidentified man cast a solitary silhouette in the window of his home in Srinagar, the capital of disputed, Indian-controlled Kashmir, as he offered evening prayers.

Half a world away, Chicago Bears wide receiver Anthony Miller knelt on the field and pressed a fist solemnly to his bowed forehead after a game against the Atlanta Falcons.

And on the Lebanese coast, Afaf Adulhamid, crossed her arms and cried as she prayed for the safe return of her 27-year-old son, who went missing at sea while trying to cross on a boat to Cyprus with other migrants. 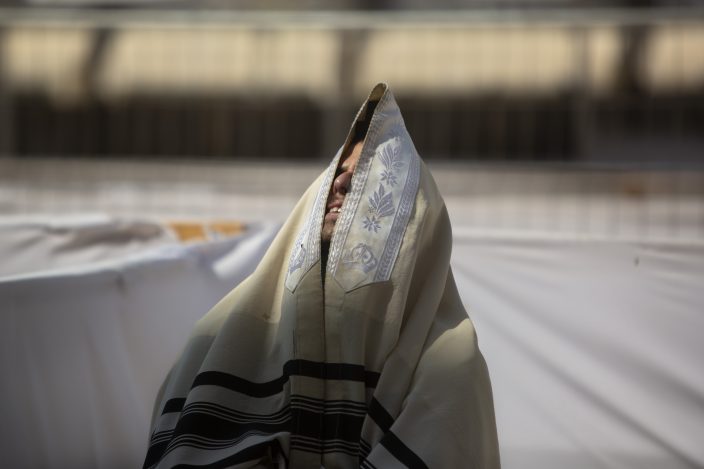 An ultra-Orthodox Jewish man prays ahead of the Jewish new year at the Western Wall, the holiest site where Jews can pray in Jerusalem's old city, Wednesday, Sept. 16, 2020. (AP PhotoSebastian Scheiner)

Associated Press photographers captured moments like these this past month showing the power that prayer holds for billions of faithful around the globe — and the diversity of ways in which it is manifested.

Some prayed in remembrance, such as the nuns who surrounded the tomb of Saint Theresa on the anniversary of her death in Kolkata, India, or at the Sept. 11 monument in New York, inscribed with the names of people killed in the 2001 terror attacks.

Others did so amid protest, like 71-year-old Dionisia Jorge of the Israelite Church of Peru, who knelt arms-wide with a rainbow-patterned Inca flag outside Congress, where some lawmakers were calling for the dismissal of President Martín Vizcarra over a corruption probe. 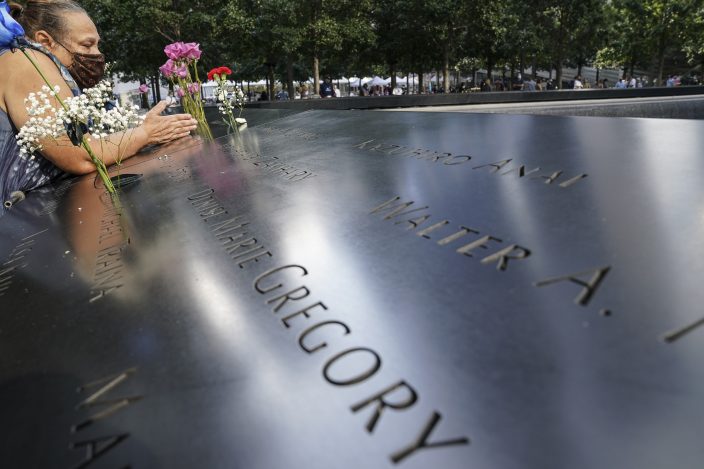 A mourner prays over the inscribed name of the deceased Emilio Pete Ortiz at the National September 11 Memorial and Museum, Friday, Sept. 11, 2020, in New York. (AP PhotoJohn Minchillo)

Still others marked festivals and holidays; at the Western Wall in Jerusalem’s old city, an ultra-Orthodox man and an armed Israeli soldier both wearing surgical masks prayed on opposite sides of a white barrier ahead of Yom Kippur, the holiest day in the Jewish year.

They were far from the only ones practicing social distancing amid the ongoing pandemic. In Havana, devout Cubans stood at a safe distance from each other in the street while listening to a Roman Catholic Mass broadcast by radio honoring the Virgin of Charity of Cobre, their country’s patron, on her feast day.

But in Bucharest, Romania, a man held a crucifix aloft as he shouted anti-mask slogans against restrictions designed to curb the spread of the coronavirus such as social distancing mandates and obligatory face coverings in schools. 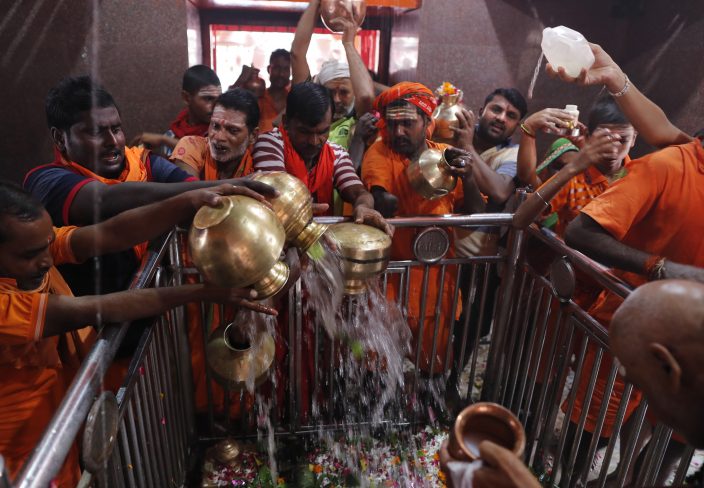 Indian Hindu Kanwarias, worshippers of the Hindu God Shiva, offer holy water from the Ganges River at Padilla Mahadev temple, on the outskirts of Prayagraj, India, Sunday, Sept. 27, 2020. Kanwarias are devotees performing a ritual pilgrimage in which they walk the roads of India, clad in saffron, and carry ornately decorated canisters of the sacred water from the Ganges River to take back to Hindu temples in their hometowns. (AP PhotoRajesh Kumar Singh)

Following the controversial conversion of Istanbul’s Byzantine-era landmark Hagia Sophia back into a mosque, worshippers held the first Muslim prayers inside in 86 years, its needlelike minarets framing a luminous, rising full moon.

These and more are among the AP’s top faith-related images published in September. 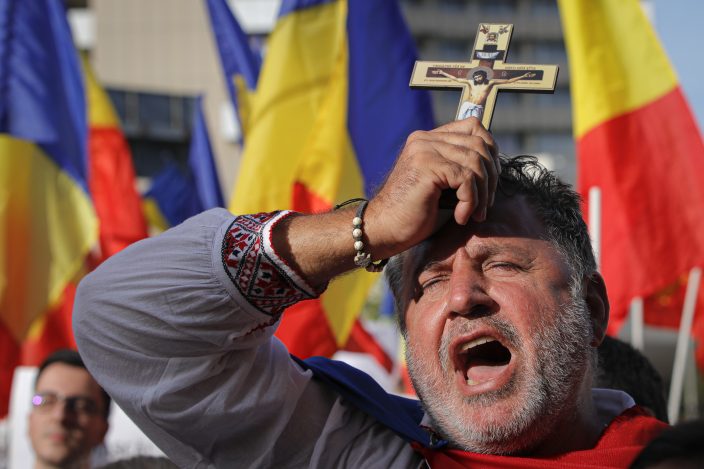 A man shouts slogans against the use of face masks as a means of protection against the COVID-19 infection during a protest in Bucharest, Romania, Saturday, Sept. 19, 2020. Several hundred Romanians, including many families with young children, held a protest in the country's capital against measures meant to curb the spread of the coronavirus, especially social distancing and the mandatory use of masks in schools. (AP PhotoVadim Ghirda) 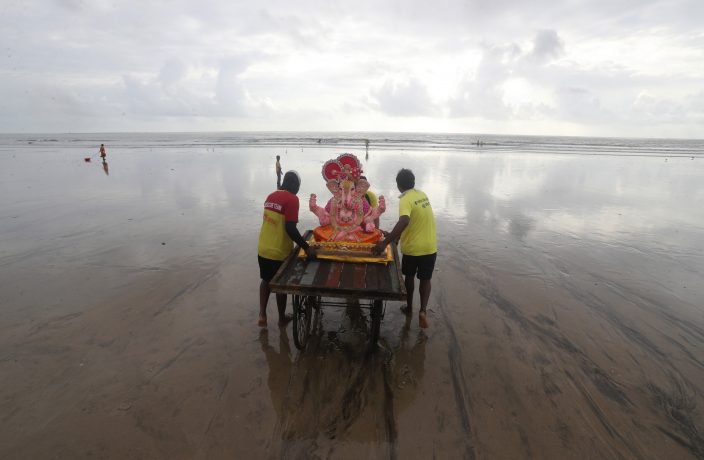 Volunteers push a hand cart as they prepare to immerse an idol of elephant-headed Hindu god Ganesha in the Arabian Sea, marking the end of the 10-day long Ganesh Chaturthi festival in Mumbai, India, Tuesday, Sept. 1, 2020. (AP PhotoRafiq Maqbool) 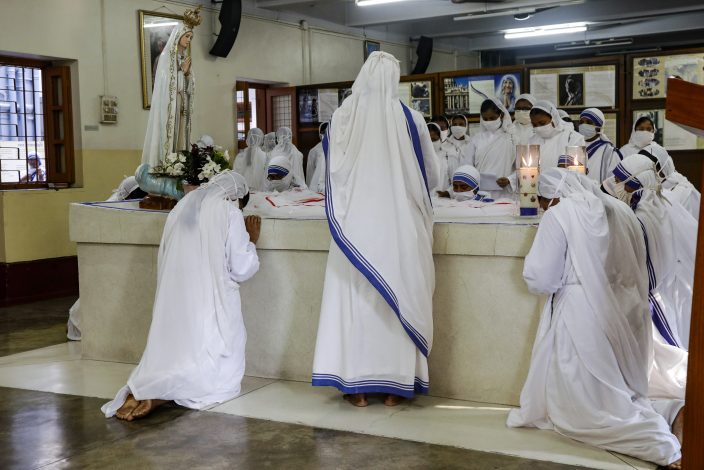 Nuns of the Missionaries of Charity, the order founded by Saint Teresa, wearing masks as precaution against the coronavirus pray by the tomb of the saint to mark her death anniversary in Kolkata, India, Saturday, Sept. 5, 2020. The Nobel Peace Prize winning Catholic nun who spent 45-years serving for the poor, sick, orphaned, and dying, died in Kolkata on this day in 1997 at age 87. (AP PhotoBikas Das) 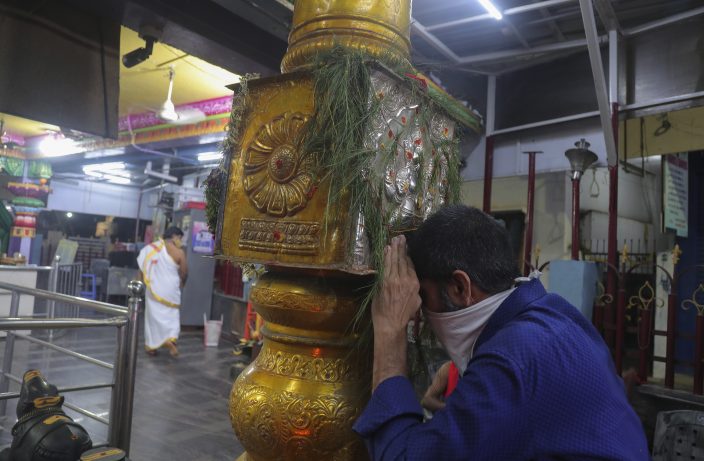 A man wearing a scarf as a precaution against the coronavirus offers prayers at Shakti Ganesh temple in Hyderabad, India, Tuesday, Sept. 22, 2020. (AP PhotoMahesh Kumar A.) 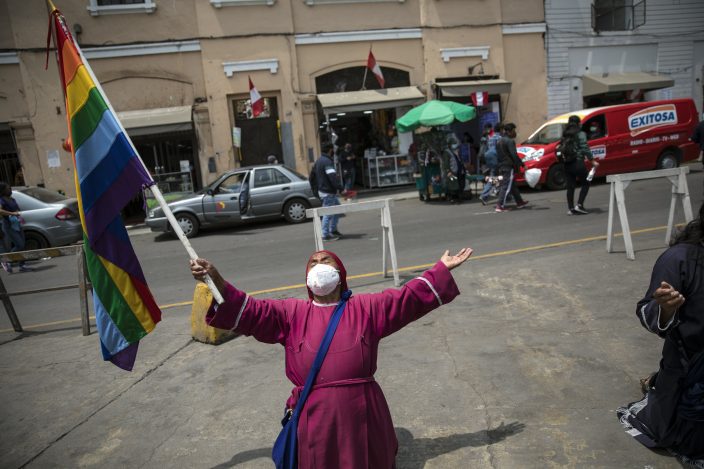 Dionisia Jorge, 71, member of the Israelite Church of Peru, kneels in prayer outside Congress, while holding a Tahuantinsuyo flag of the Inca empire, in Lima, Peru, Friday, Sept. 11, 2020. Some of Peru's lawmakers are calling for the dismissal of President Martín Vizcarra based on audios in which he is heard coaching two officials close to him for a congressional investigation into corruption. (AP PhotoRodrigo Abd) 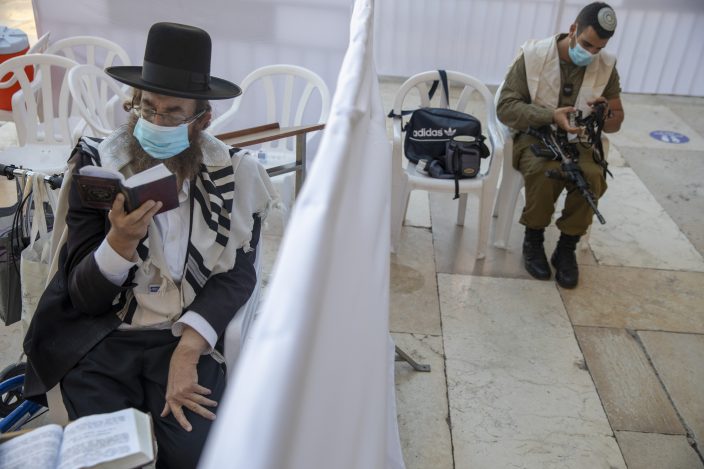 With a social distancing barrier, an ultra-Orthodox Jewish man and an Israeli soldier pray ahead of Yom Kippur, the holiest day in the Jewish year which starts at sundown Sunday during a three-week nationwide lockdown to curb the spread of the coronavirus at the Western Wall, in Jerusalem's old city, Sunday, Sept. 27, 2020. (AP PhotoAriel Schalit) 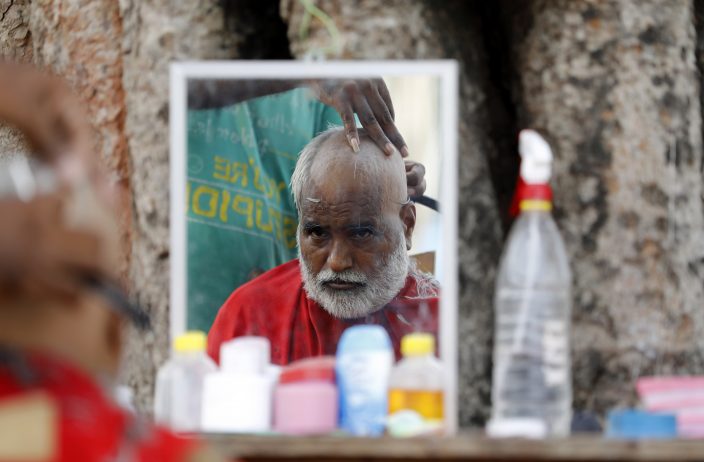 A Hindu devotee gets a tonsure to perform "Pind Daan" rituals at Sangam in Prayagraj in the northern Indian state of Uttar Pradesh India, Wednesday, Sept. 16, 2020. Pind Daan rituals are performed to bring peace and salvation to the souls of deceased ancestors. (AP PhotoRajesh Kumar Singh) 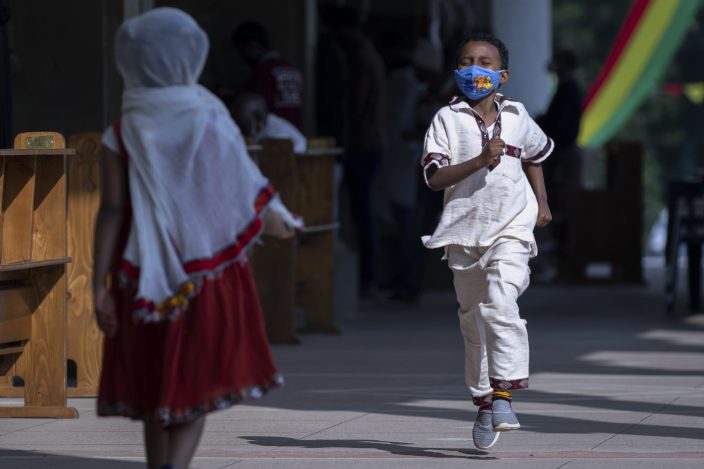 A young boy wearing a face mask to curb the spread of the coronavirus runs at a prayer ceremony to mark the holiday of "Enkutatash", the first day of the new year in the Ethiopian calendar, which is traditionally associated with the return of the Queen of Sheba to Ethiopia some 3,000 years ago, at Bole Medhane Alem Ethiopian Orthodox Cathedral in the capital Addis Ababa, Ethiopia Friday, Sept. 11, 2020. (AP PhotoMulugeta Ayene) 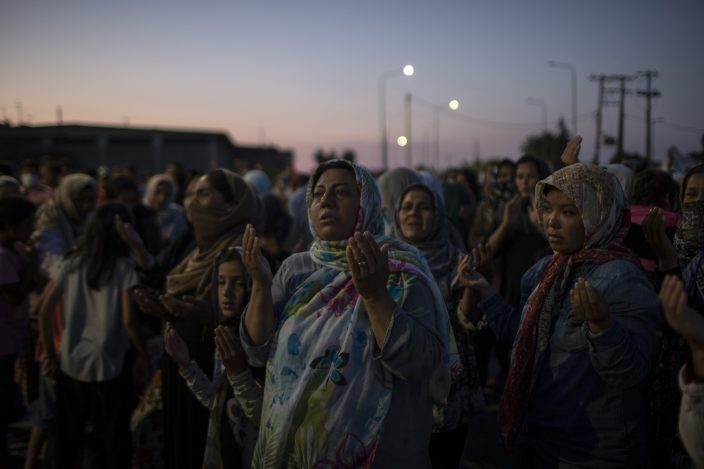 Migrants pray on the road near Mytilene town, on the northeastern island of Lesbos, Greece, Sunday, Sept. 13, 2020. Greece's prime minister Kyriakos Mitsotakis demanded Sunday that the European Union take a greater responsibility for managing migration into the bloc, as Greek authorities promised that 12,000 migrants and asylum-seekers left homeless after fire gutted an overcrowded camp would be moved shortly to a new tent city. (AP PhotoPetros Giannakouris) 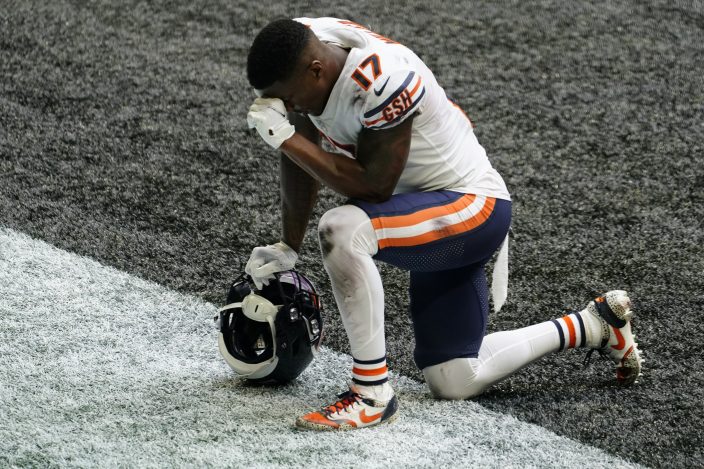 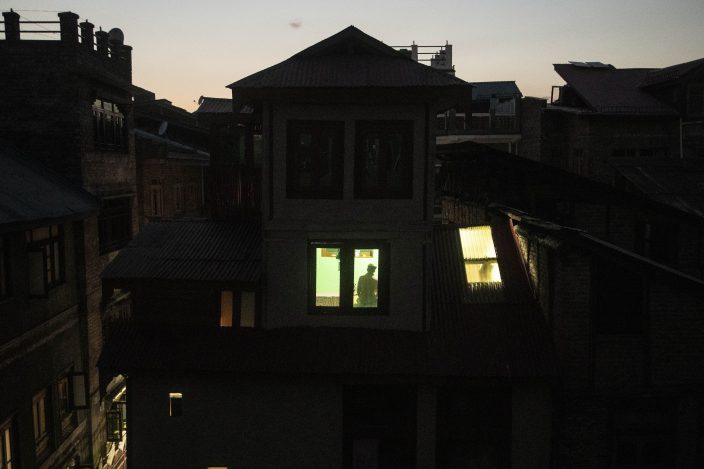 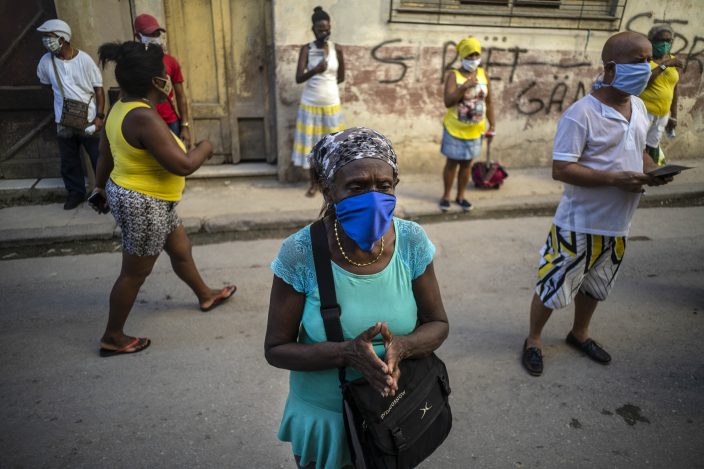 People wearing face masks amid the new coronavirus pandemic pray during a Catholic Mass broadcast by radio in honor of the Virgin of Charity of Cobre, on her feast day in Havana, Cuba, Tuesday, Sept. 8, 2020. The virgin is Cuba's Catholic patron saint. (AP PhotoRamon Espinosa) 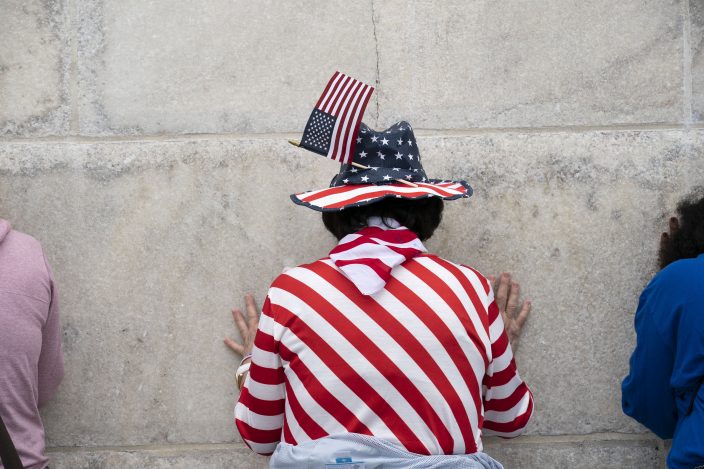 Followers of Franklin Graham pray at the base of the Washington Monument as they march from the Lincoln Memorial to Capitol Hill, during the Prayer March at the National Mall, in Washington, Saturday, Sept. 26, 2020. (AP PhotoJose Luis Magana) 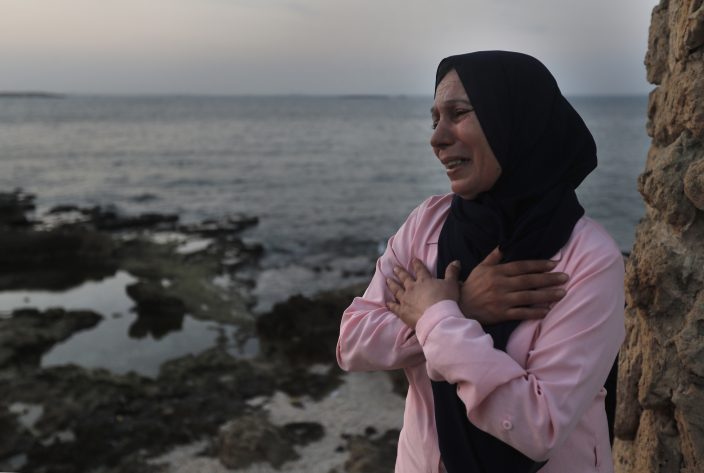 Lebanese Afaf Adulhamid the mother of Mohammed Khaldoun, 27, who is still missing at sea while he was trying with other migrants to reach Cyprus on a boat, cries and prays her son's safe return, as she stands on the coast of Tripoli city, north Lebanon Thursday, Sept. 17, 2020. Mohammed is one of scores of people who have tried in recent weeks to flee Lebanon that is passing through its worst economic and financial crisis in decades to European Union member Cyprus. (AP PhotoHussein Malla) 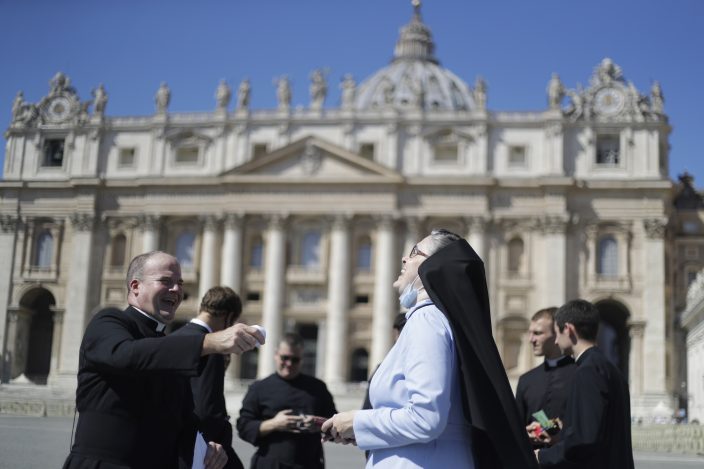 A priest and a nun laugh as they wait for Pope Francis to recite the Angelus noon prayer, in St. Peter's Square at the Vatican, Sunday, Sept. 6, 2020. (AP PhotoGregorio Borgia) 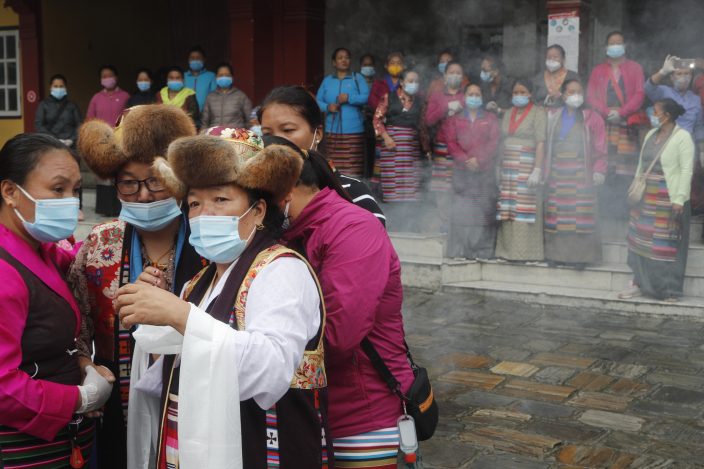 AP PHOTOS: As pandemic rages, the faithful mourn, carry on

AP PHOTOS: Around the world, faith in the summer of COVID-19