Dominic Calvert-Lewin left the pitch at Goodison Park with a smile on his face and the match ball in his left hand.

Another home game, another hat trick for the most talked-about striker in English soccer at the moment.

That a first England call-up arrived on Thursday came as no surprise, as the 23-year-old Calvert-Lewin is putting up numbers for Everton few thought he was capable of. 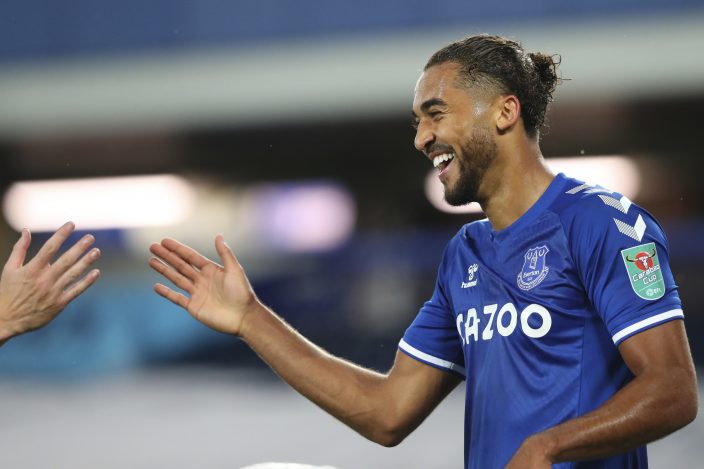 Everton's Dominic Calvert-Lewin celebrates after scoring his side's fourth goal during the English League Cup round of 16 soccer match between Everton and West Ham at the Goodison Park stadium in Liverpool, England, Wednesday, Sept. 30, 2020. (Alex Livesey, Pool via AP)

A three-goal haul in an English League Cup win over West Ham on Wednesday took his tally to eight goals in five games in all competitions. Not bad for a player long regarded as a striker who had pretty much everything except the most important attribute of all: Putting the ball in the net.

Working under one of the most storied coaches ever appears to have put that right.

“He’s in a very good moment,” Everton manager Carlo Ancelotti says. “Whether he’s the best (striker in England) I don’t know, but I don’t care. 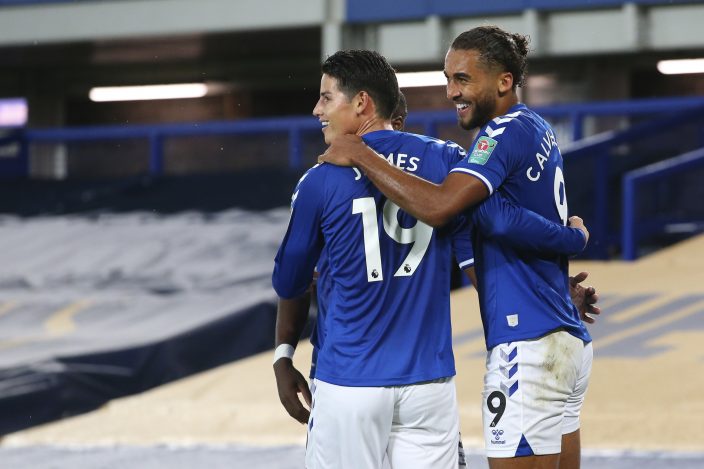 Everton's Dominic Calvert-Lewin, right, celebrates after scoring his side's fourth goal during the English League Cup round of 16 soccer match between Everton and West Ham at the Goodison Park stadium in Liverpool, England, Wednesday, Sept. 30, 2020. (Alex Livesey, Pool via AP)

A natural at leading the line, the tall and rangy Calvert-Lewin has always been a hard worker, good in the air, and owning plenty of pace to worry defenders. The problem was his lack of a cutting edge in the box, and it was something Ancelotti noticed upon arriving at Everton last December.

One of Ancelotti’s pet projects in his nine months in charge at Goodison, then, has been to turn Calvert-Lewin into more of a penalty-area poacher.

Just like a striker he had at AC Milan, Filippo Inzaghi.

“I had a fantastic striker in Inzaghi, who scored 300 goals and 210 with one touch,” Ancelotti said this month.

“A striker has to be focused in the box and I think Calvert-Lewin understands really well because in the box he has speed, he jumps really high, he has power. Where he has improved more is there, in the box.”

That has been borne out in the goals the striker has scored this season. Seven of the eight have come with his first touch, with the other showing a different side of his game as he brought down a long ball over his shoulder with his left foot and deftly chipped the goalkeeper with his right.

He is also developing that uncanny knack all top strikers want — being in the right place at the right time.

“It’s nice to know what I’m working on in training is coming off on the pitch,” says Calvert-Lewin, one of a number of Premier League players to have his hair in a bun this season. “That’s the biggest reward, really.”

Calvert-Lewin, who was part of England’s World Cup-winning under-20 team in 2017, has started every league match since Ancelotti took charge.

He netted eight goals in 10 league games from Ancelotti’s arrival to the suspension of soccer in March because of the coronavirus outbreak. This season, he has five goals in three league games — including a hat trick against West Bromwich Albion — to be tied as top scorer in the division with Leicester's Jamie Vardy.

“A lot of Dominic’s game I’ve liked for a long time," England coach Gareth Southgate said on Thursday after selecting the striker. “What he’s adding now is the goals that haven’t always been there.”

Calvert-Lewin will also benefit in the 2020-21 season from having better players behind him, with Colombia playmaker James Rodriguez supplying him from the right after his move from Real Madrid.

“We’ve got players who are capable of scoring from different areas of the pitch,” Calvert-Lewin says.

“A lot of my goals have been one-touch finishes so it’s about getting in the right areas and being the man to put them in the back of the net.”

Calvert-Lewin has put himself in special company by scoring successive hat tricks in the same month for Everton. The last player to do so was the great Dixie Dean, Everton’s record scorer, in 1931.

Dean, who has a statue outside Goodison Park, struck 60 goals in 39 games for Everton one season.

Calvert-Lewin will do well to even get close to that number. But under Ancelotti, anything seems possible.