The NFL postponed Sunday's Pittsburgh Steelers game at Tennessee until later in the season after one additional Titans player and one personnel member tested positive for COVID-19.

The announcement Thursday came one day after the league said it hoped to play the game on Monday or Tuesday. The NFL said a new game date would be announced “shortly.”

“The decision to postpone the game was made to ensure the health and safety of players, coaches and game day personnel," the league said. "The Titans facility will remain closed and the team will continue to have no in-person activities until further notice.” 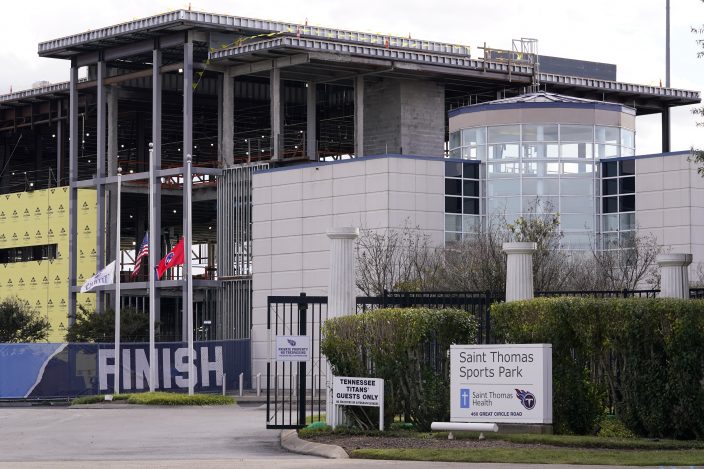 The entrance to the Tennessee Titans' practice facility is shown Tuesday, Sept. 29, 2020, in Nashville, Tenn. The Titans suspended in-person activities through Friday after the NFL said three Titans players and five personnel tested positive for the coronavirus, becoming the first COVID-19 outbreak of the NFL season in Week 4. The facility is now closed for four days to help limit the spread of the virus. (AP PhotoMark Humphrey)

On Tuesday, the Titans (3-0) placed three players on the reserve/COVID-19 list, including key players defensive captain and lineman DaQuan Jones and long snapper Beau Brinkley. Outside linebacker Kamalei Correa became the fourth on that list Wednesday.

With the two new cases, the Titans' total is now 11: five players and six other organization members. That doesn't include outside linebackers coach Shane Bowen whose positive result came back last Saturday, preventing him from traveling with Tennessee to Minnesota for a 31-30 win.

Now the NFL has to figure out how to reschedule a game between two of its seven undefeated teams after the league's first COVID-19 outbreak of the coronavirus pandemic.

The simplest scenario for rescheduling is Week 7 on Oct. 25. That's the Titans' bye. Pittsburgh is scheduled to play at Baltimore that week, but both the Steelers and Ravens have byes in Week 8 allowing the NFL to make a change affecting only one other team.

The challenge is turning this week into a bye for both Tennessee and Pittsburgh and comes after both teams started preparing to play as early as Monday. The Titans, who played in the AFC championship game in January, and the Steelers, revived with quarterback Ben Roethlisberger back now, may be playing without a break through the rest of the regular season.

Pittsburgh hosts Philadelphia on Oct. 11. Buffalo is scheduled to visit Tennessee that day, the next game that could be affected depending on how the Titans’ outbreak continues.

AP source: No positive tests for Titans; game on with Bills

AP source: Bills-Titans on with no positives for TN, Pats