Will Muschamp has orchestrated several defensive gems in the Swamp.

As a coordinator and a head coach. As a visitor and a member of the home team. As a winner and a loser.

He really could use another one Saturday. 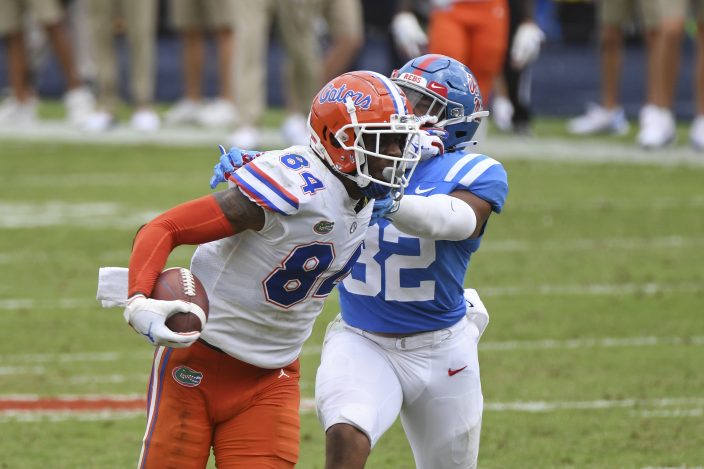 Muschamp and South Carolina (0-1) will try to slow down No. 3 Florida, which is coming off one of its best performances in Southeastern Conference play, a 51-35 victory at Ole Miss in which the Gators (1-0) gained their most yards (642) against a league opponent.

Kyle Trask was nearly flawless, throwing for 416 yards and six touchdowns. It was the most TD passes by any of coach Dan Mullen’s previous quarterbacks, a list that includes Alex Smith, Tim Tebow and Dak Prescott.

Trask and tight end Kyle Pitts were a two-man show, connecting eight times for 170 yards and four scores. Pitts torched linebackers, bullied cornerbacks and had his way with just about everyone on the field.

“Kyle Pitts is probably the best tight end in the country,” Muschamp said. “I would assume he is. Certainly, the best one we’ll see. Long, athletic, has speed, difficult matchup guy and has a good knack of getting open and finding space.”

The Gamecocks have six returning starters on that side of the ball, including standout linebacker Ernest Jones, speedy pass rusher Aaron Sterling and 6-foot-4 cornerback Israel Mukuamu.

“They’re long, they’re lanky and they like to hold,” Florida receiver Trevon Grimes said. “So it’s going to be a challenge for us. But we’re looking forward to it, we’re excited and we’ll never shy away from a challenge.”

South Carolina allowed 394 yards in a loss to No. 21 Tennessee but held the Volunteers to 1 of 11 on third-down conversions. The D also played well against Florida last year, doing enough for the Gamecocks to have a fourth-quarter lead until consecutive turnovers deep in their territory helped the Gators pull away.

Trask ended up with 200 yards passing, and Pitts finished with five receptions for 29 yards.

Carolina surely would welcome something similar Saturday. The Gators, meanwhile, think they have more to show after a record-setting opener.

“It’s a very scary offense,” Grimes said. “It’s kind of like you have to pick your poison. Who do you want to try to double cover or what do you want to do? Either way, you can’t guard everybody on the field at that same time. … There’s more to come, a lot more to come.”

Muschamp gave his receivers a man-coverage mandate: they must win one-on-one matchups to succeed. The Gamecocks lost to Tennessee despite Shi Smith finishing with 10 catches for 140 yards. Muschamp said more wideouts must be involved this week. Expect to see highly regarded freshman quarterback Luke Doty get some chances at receiver in Gainesville.

Muschamp and Mullen know each other well, going back nearly 15 years as opposing coordinators in the SEC. Mullen is 4-2 all-time against Muschamp. He lost their first two matchups in 2006 and 2007 (Auburn over Florida).

Colorado State graduate transfer Collin Hill showed a calm demeanor while rallying the Gamecocks from a two-touchdown deficit in the second half last week. He finished with 290 yards passing and a touchdown.

“He’s got an air of confidence about him as a football player that permeates among our offense and our football team,” Muschamp said.

Florida struggled to sell out the Swamp even though there were just 17,000 tickets available. Mullen pleaded this week for fans to show up for the team’s home opener. About 3,000 tickets remained unsold in the middle of the week, so the school made those available to students.

Only 2,000 tickets were initially earmarked for students.