Frederick Wiseman has spent more than half a century documenting American institutions.

With a small crew, he has tirelessly made lengthy, sober, engrossing filmic portraits of life in Jackson Heights, Queens; a Texas boxing gym; a Maine fishing village; small-town Indiana; a Massachusetts hospital for the criminally insane; a Philadelphia high school; a Colorado meatpacking plant; the New York public library.

Wiseman, 90, records sound himself, holding the boom microphone. He doesn’t research beforehand, instead letting what he sees dictate a film. No one lives more by the dictum of showing, not telling, than Wiseman. After assembling 100-250 hours of rushes, he toils over the footage, assembling sequences that capture life at a certain time and place, stitching together a narrative of expansive, long-take detail. Collectively, the films constitute a sprawling, clear-eyed mosaic of America. 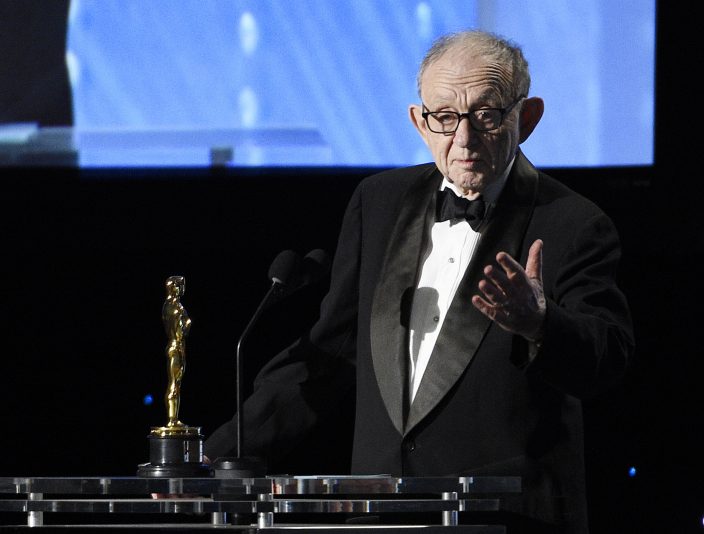 FILE - Honoree Frederick Wiseman addresses the audience at the 2016 Governors Awards in Los Angeles on Nov. 12, 2016. Wiseman has spent more than half a century documenting American institutions. His latest is a profile of American government. In “City Hall” Wiseman has turned his camera on the Boston city government. After drawing acclaim at the major fall film festivals, it opens in late October. (Photo by Chris PizzelloInvisionAP, File)

Many consider Wiseman the greatest living documentary filmmaker. In 2016, he received an honorary Academy Award. “It’s as important to document kindness, civility and generosity of spirit as it is cruelty, banality and indifference,” he said.

In a time of unprecedented strain on federal institutions, Wiseman’s latest is a profile of a more local, functioning realm of U.S. civic life. “City Hall,” which played to typical acclaim at the Venice, Toronto and New York film festivals over the past few weeks, documents the daily hum and long-range aspirations of the Boston city government under Mayor Marty Walsh. It opens in virtual theaters Oct. 28.

Wiseman, who spoke in a recent interview from the apartment in Paris that’s been his most regular home for the past 15 years, finished post-production on “City Hall” just as the pandemic was beginning. Aside from walks to relax, he’s stayed mostly inside since March. Asked about his health, he replied, “Well, I’m still breathing.” But sitting still is hard for someone who has averaged a movie a year for five decades. “For the first time in 55 years, I don’t have a movie to work on," he said.

AP: The communal worlds of your films — where groups of people are so often in rooms talking to one another — feels very far away right now, doesn’t it?

WISEMAN: At the moment I can’t work. It’s terrible. To make the kind of movies I make I can encounter a couple hundred people every day. I’m working on a script to a short fiction film that I can shoot in a modest way with a small crew in an isolated place. But not having any work to do is a serious problem. I’m bored out of my mind, actually.

AP: In “City Hall" we see such a wide scope of civic operations, from garbage collection to homeless outreach, from building inspections to mayoral staff meetings.

WISEMAN: City government touches more aspects of our lives than any other form of government. Among other things, it provides the necessary limits as to what we have to do to get along with each other and live together. Speeding limits. Places to park. Minimum health requirements for restaurants. The control of violence. The monopoly on the right to use force. Providing health services. It goes on and on and on. You sort of, or at least I did, take it for granted.

AP: Do you consider “City Hall” a response to Donald Trump?

WISEMAN: If I made “City Hall” when Obama was president, one would be measuring Walsh against Obama. But in the current context, we’re measuring him against Trump, so he comes out so much better. Not that he’s not good, but the contrast is extreme. The film doesn’t in any way suggest the government of Boston is perfect. But it does suggest, I hope, that there’s a mayor who cares and is trying to implement programs and raise money for services that will make a difference in people’s lives.

AP: What draws you to institutions as subjects?

WISEMAN: The institution is also just an excuse to observe human behavior in somewhat defined conditions. The films are as much about that as they are about institutions. For most of the films, all the encounters take place within a relatively limited geographical framework. Sometimes it’s just a building or in the case of “Boxing Gym,” a couple of rooms. In the case of “National Gallery,” it's a big building. In the case of “Public Housing,” it was a housing project. Anything that takes place within the geographic boundaries of the institution is fair game to include in the film. Anything that takes place outside those boundaries is another film.

AP: Are you partly motivated to leave these films behind as time capsules to show the way people talked and dressed and moved?

AP: There’s a scene in that where a policeman chokes a black woman.

WISEMAN: That aroused almost no comment when the film was the shown in 1968. It was sort of by the by. It was more tisk-tisk. No protests. There was no political activity in Kansas, Missouri, as a consequence of that sequence, and it’s pretty horrible.

AP: Those kinds of incidents of police brutality are more widely recorded now. Do you think them being better documented will change the behavior?

WISEMAN: Ah, that’s the million-dollar question. I don’t know what changes human behavior. I think human behavior has been set now for 10,000 or 15,000 years.

AP: You’ve said you watch fiction films more than documentaries. Which filmmakers have had an influence on you?

WISEMAN: I’ve probably been more influenced by the books I’ve read than the movies I’ve seen. I’ve never consciously drawn on the work of another filmmaker while I’m shooting or editing. When I read a novel or read a poem, I think about the same kind of things that I do when I’m editing. When I went to college a long time ago, it was called close reading. It probably has a fancier name now. But we were taught to pay close attention to the text and not incorporate in our analysis of the text anything outside of it. In other words, we weren’t encouraged to read a biography of Ernest Hemingway to read “The Sun Also Rises.” So I learned how to pay close attention. So when I’m shooting and in particular when I’m editing, in order to make a film out of 150 hours of rushes, I have to pay close attention to what people are saying and doing and how they’re moving and how they’re dressed and the language they’re using. I have to explain the behavior that I’m seeing and hearing to myself in order to make a judgment. The making of these films involves an effort to be aware, in a sense to be awake.

AP: You have a good line about “verité” filmmaking in which you say you’re “somewhat more conscious than a fly.”

WISEMAN: The whole notion of a fly on the wall I find disgusting. It’s demeaning, really.

AP: And you don’t like the word “documentary,” right?

WISEMAN: I’m happy with the word “movies.” I make movies. Maybe it’s because when I was growing up, “documentary” had an aura about it. You were supposed to see it because it was good for you, a bit like ex-lax. I think a movie should be entertaining, instructive, dramatic, funny. You should look for the same qualities in a documentary as in a fiction film. I hate didacticism in writing and I also hate it in movies. I don’t like to be told what to think. I like to be asked to work and figure out what’s going on, so I discover.

WISEMAN: They’re all enjoyable to make. One of the reasons I like doing this is because it’s fun. Each movie is a new subject. I like to think I learned something. I have an intense absorption in the film, in the shooting and the editing. It’s physically and emotionally and intellectually demanding. That’s a good combination of things for me.