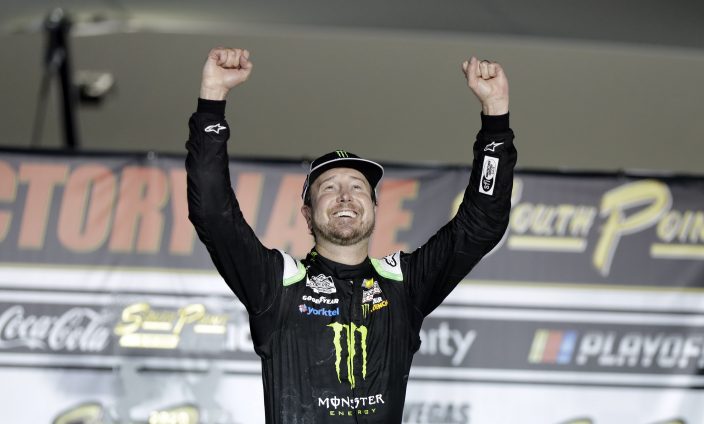 Last race: Kurt Busch became the first driver to ensure a spot in the next round of the playoffs with his first career victory at Las Vegas.

Fast facts: Kevin Harvick's lead is just three over Denny Hamlin with Brad Keselowski 45 points back, Martin Truex Jr. 46 back and Joey Logano 50 behind. ... Kurt Busch was 12th in points before his victory at Las Vegas vaulted him to ninth, two points behind his brother, Kyle.

Last race: Chase Briscoe led 164 of 200 laps, swept both stage win and claimed his series-best eighth victory of the season at Las Vegas.

Fast facts: Briscoe leads Austin Cindric by 17 points after the first playoff race with Noah Gragson 34 points back in third. ... Briscoe tied Sam Ard and Jack Ingram as the only drivers to win eight times in the first 27 races of a season.

Last year: Spencer Boyd won after starting 25th, the furthest back a winner started all season.

Last race: Austin Hill grabbed the lead on a restart with 39 laps to go and won at Las Vegas.

Fast facts: Sheldon Creed leads the points standings by eight over Brett Moffitt and 13 over Zane Smith. ... Moffitt has yet to win a race but has 12 top-10 finishes in 18 races. Hill leads all drivers with 15 top-10 finishes this season. He is seventh in the standings, 39 points back. ... The playoff field will be reduced to eight after this race.

Last race: Colton Herta won the second race in a doubleheader weekend at Mid-Ohio from the pole position.

Fast facts: Scott Dixon leads 2019 champion Josef Newgarden by 72 points through 11 of 14 scheduled races. ... The course has 14 turns and is 2.439 miles long. ... Three-time Indy 500 winner Helio Castroneves will drive for Arrow McLaren SP as Oliver Askew deals with the effects of a concussion.