The previous time Eric Fisher can recall catching a touchdown pass was during his junior season at Stoney Creek High School in Rochester, Michigan, when his old coach would run a jumbo package at the goal line and he would line up at tight end.

That was about a dozen years, 100 pounds and a million miles from where Fisher found himself Monday night.

In perhaps the best example yet of the creativity of the Kansas City Chiefs' offense, coach Andy Reid had drawn up a play that had Fisher — the high school linebacker-turned-Pro Bowl offensive tackle — lining up as eligible. 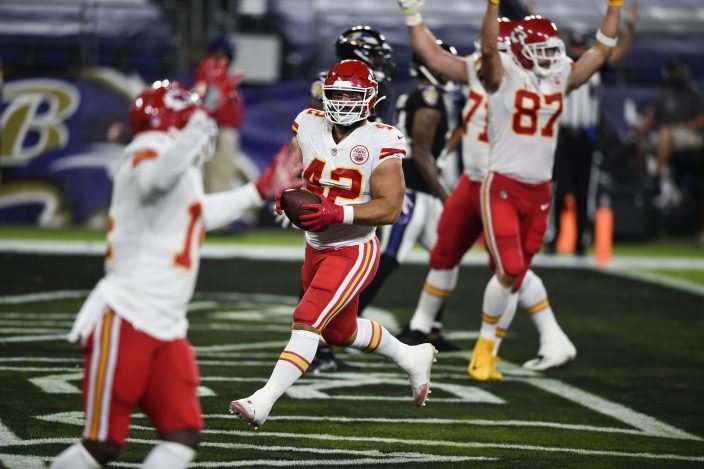 Kansas City Chiefs running back Anthony Sherman (42) and teammates celebrate his touchdown after his pass reception during the first half of an NFL football game against the Baltimore Ravens, Monday, Sept. 28, 2020, in Baltimore. (AP PhotoGail Burton)

And when the ball was snapped to Patrick Mahomes, the 315-pounder managed to slip into the end zone completely undetected by the Baltimore Ravens defense, which could only watch aghast as Fisher clamped his big mitts around the touchdown pass.

“Coach Reid has quite the playbook,” Fisher said, “so when we say we practice something a lot, three or four reps is a lot. We have a lot to get through in a week. I think we probably ran that play three times, maybe.”

Fisher never thought it would get called when guard Andrew Wylie was sent to the hospital during warmups for a suspected case of appendicitis. The formation calls for a whole bunch of big bodies and they suddenly were a man down. 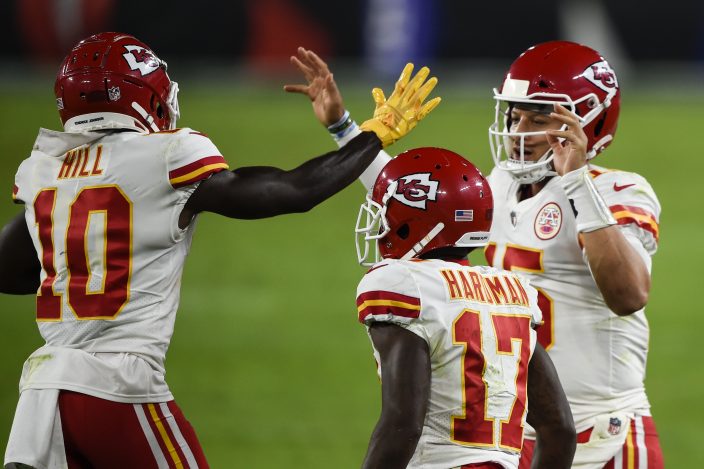 Kansas City Chiefs wide receiver Tyreek Hill (10) and quarterback Patrick Mahomes (15) celebrate after connecting for a touchdown with wide receiver Mecole Hardman (17) nearby during the first half of an NFL football game against the Baltimore Ravens, Monday, Sept. 28, 2020, in Baltimore. (AP PhotoGail Burton)

“It kind of surprised me, which was good,” he said. “I wasn't thinking about it all game.”

The Ravens clearly weren't thinking about him catching a pass, either.

Mahomes finished 31 of 42 for 385 yards with four touchdown passes and another on the ground, but what may have been most impressive about that stat line was the number of receivers that were involved in the game plan.

In all, Mahomes tried to connect with 11 different players during the 34-20 rout of the defending AFC North champions.

“I think he has a lot of trust in the guys,” Reid said, “and opportunities have called to where maybe it's not the primary guy and he goes to a different receiver, and he's been able to do it and see it and do it well.”

Besides the uncanny ability of their quarterback to spread the ball around, what makes it possible for the Chiefs to unleash so many targets on any given pass play is their selflessness. Kelce and Hill get most of the attention, and Watkins has been the focus of plenty of defenses, but none of them has a diva-like attitude where they demand the ball.

Watkins was so magnanimous in the offseason that he restructured his contract to help the Chiefs free up some cap space.

“I think they found a perfect match of having skill guys and speed and a quarterback that can, you know, keep plays alive, but also smart — keep his eyes downfield,” said Patriots safety Devin McCourty, who will be tasked with trying to slow them down Sunday. “They're going to give us a lot of different issues that we're going to have to rise up and play.”

The Patriots should know.

This is the fourth straight year they have played the Chiefs, including their AFC title game won by New England in overtime two seasons ago. And when the Chiefs rolled into Foxborough last December and rolled out with a 23-16 win to avenge that defeat, it was in part because Mahomes managed to spread the ball to nine different receivers.

Despite not finding his big offensive tackle, as Mahomes did Monday night.

“Those gadget plays and those formations that are a little out of the ordinary, that will pop up from time to time,” Patriots coach Bill Belichick said, “but they really win with good fundamentals, good execution and the core things that they do. But obviously they put things in there to mix it up and give the defenses a different look. Those are definitely coming in every game, a different one — ones that we haven't practiced. So we'll have to handle those situations when they come up."

Chinese manufacturing expands in October but at slower ...