One of the best running backs in the nation found himself standing on the Oklahoma State sideline after fumbling on two straight second-half possession, even though the Cowboys were in the middle of a scrap with salty West Virginia.

Think that lit a fire under Chuba Hubbard?

The junior standout who was eighth in Heisman Trophy voting a year ago made it back onto the field in time to rip off a 23-yard touchdown run with 1:17 left to give the Cowboys a win. It was a good ending to an otherwise rough afternoon — and a couple of rocky weeks to start the season — for Hubbard and the rest of the Oklahoma State offense, which has grown a bit accustomed to getting just about whatever it wants when it takes the field. 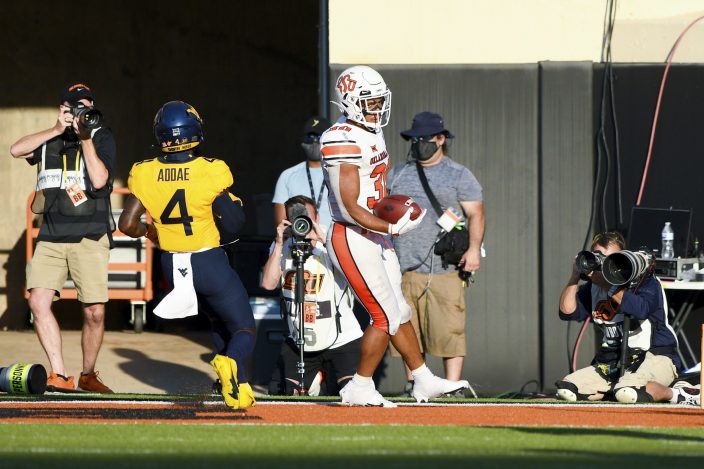 Oklahoma State running back Chuba Hubbard (30) scores a touchdown during the second half of an NCAA college football game against West Virginia Saturday, Sept. 26, 2020, in Stillwater, Okla. (AP PhotoBrody Schmidt)

“Our goal coming into this year is to go score 45 points or more (each game),” Oklahoma State fullback Jelani Woods said. “With the adversity we've been having, like against Tulsa, and trying to build off that, we're slowing it down but still trying to reach that goal. As an offense we're trying to take it a step at a time and improve from there.”

It's not as if the No. 17 Cowboys (2-0, 1-0 Big 12) didn't have other options when Hubbard left the field; L.D. Brown responded with 11 carries for 103 yards, including a 66-yard touchdown run. But their offense hasn't been in sync without their top running back making the kind of big gains like he did last year, when Hubbard topped 200 yards rushing in a game four times and wound up with 1,936 yards and 21 touchdowns on the season.

Maybe he can get on track against Kansas.

The Jayhawks (0-2, 0-1) held him somewhat in check a year ago — if you can call 122 yards rushing in check — but have had a hard time stopping anyone this season. Coastal Carolina gashed them for 185 yards and two touchdowns in their opener three weeks ago, and Baylor piled up 203 yards rushing and three scores last weekend.

“When you talk about Chuba, you're talking about an explosive, big, physical guy and a tremendous running back,” Kansas coach Les Miles said. “What makes him so good is he has good vision. He'll make a cut and make you miss. That would set him apart, in my opinion, and combine all of that with really quality speed.”

Miles was noncommital this week when it came to his starting quarterback. Jalon Daniels was alternately impressive and raw in the freshman's debut last week, when incumbent Thomas MacVittie was out with a shoulder injury. MacVittie could be ready to go Saturday, but that doesn't necessarily mean Daniels won't be the guy under center.

Hubbard was joined on the All-Big 12 first team last season by Pooka Williams, the Kansas standout who finished with 1,125 yards and seven scores. But just like his Cowboys counterpart, Williams has gotten off to a slow start. He had just 67 yards rushing against the Chanticleers and 76 against the Bears.

Oklahoma State coach Mike Gundy made it clear why his team has squeaked out a pair of wins: “We're 2-0 because our special teams have been very good.” That is underscored by sophomore placekicker Alex Hale, a walk-on from Australia, who is 5 for 5 on field goals and whose two against the Mountaineers last week proved to be crucial.

"He’s been really good,” Gundy said. “I don’t know with kickers and punters. I don’t have any idea what makes them tick. He doesn’t say much, he’s very calm, got good composure, he doesn’t get rattled and they tell me his technique is good.”

Kansas will unveil bronze statues of Kansas stars Gale Sayers, who died recently, and John Hadl outside the Anderson Family Football Complex during halftime of the game. Each statue stands 8 feet tall and weighs close to 1,000 pounds.

After the Jayhawks prohibited fans for their opener due to COVID-19, the school announced last week that they will allow 10,000 into Memorial Stadium on Saturday. They will be required to wear masks and adhere to social distancing guidelines.