Kentucky coach Mark Stoops wants to ensure his team doesn’t get in its own way with fewer games to get things right.

The Wildcats can’t afford mistakes Saturday against a Mississippi squad eager to atone for its own missed chances.

“When you’re playing a schedule like we’re playing this year, we have to pick it up quick,” Stoops said. “We didn’t have any game out of conference, or any game, spring game, things of that nature, to get moving. 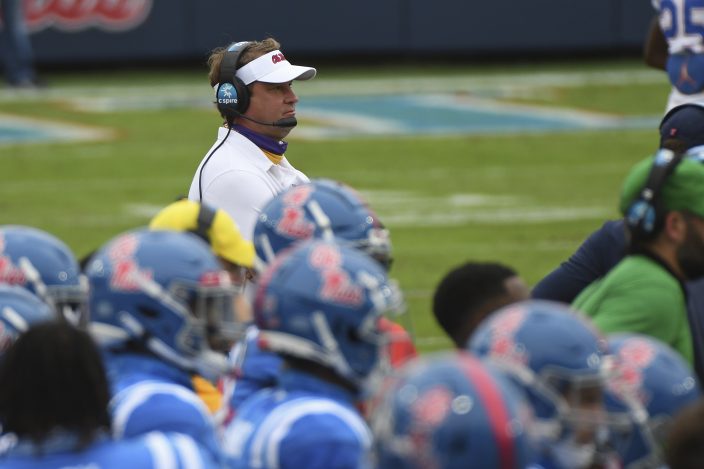 Mississippi head coach Lane Kiffin watches on from the sideline during the first half of an NCAA college football game Florida on Saturday, Sept. 26, 2020, in Oxford, Miss. (AP PhotoThomas Graning)

“Ole Miss put up a whole boatload of yards and points against a quality Florida team, so we have to get things corrected quickly and move on.”

Kentucky (0-1, 0-1 Southeastern Conference) battled then-No. 8 Auburn for three quarters before the Tigers took control in the fourth to pull out a 29-13 home win that knocked the then-No. 23 Wildcats out of the Top 25.

Four turnovers ended Wildcats opportunities to take charge, to say nothing of missed assignments and looking out of sync at other times. They still managed to outgain Auburn 384-324 but must be better against the high-powered Rebels. 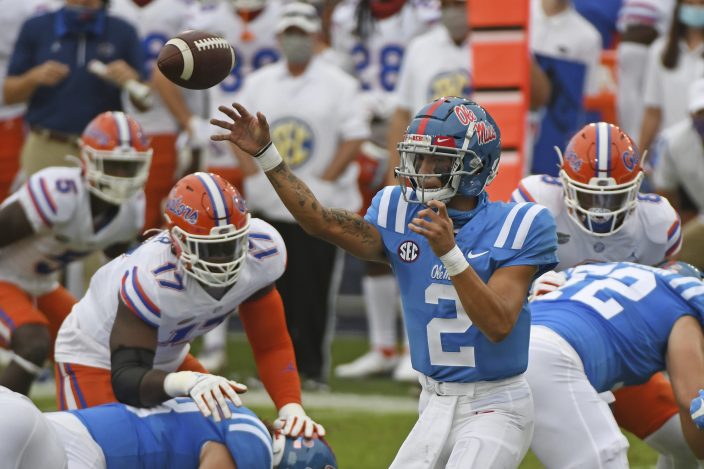 Ole Miss (0-1, 0-1) was tied at 14 with No. 5 Florida in the second quarter before the Gators ran away to a 51-35 victory in Oxford. The Rebels nonetheless compiled 613 yards, including 443 passing, and enter the contest ranked sixth nationally in total offense and third in passing respectively.

They also had their share of breakdowns at key moments — growing pains first-year coach Lane Kiffin expected but also must be corrected.

“We’re going to have to play really well and get better in areas we didn’t do well in,” he said. “A lot of work to do.” 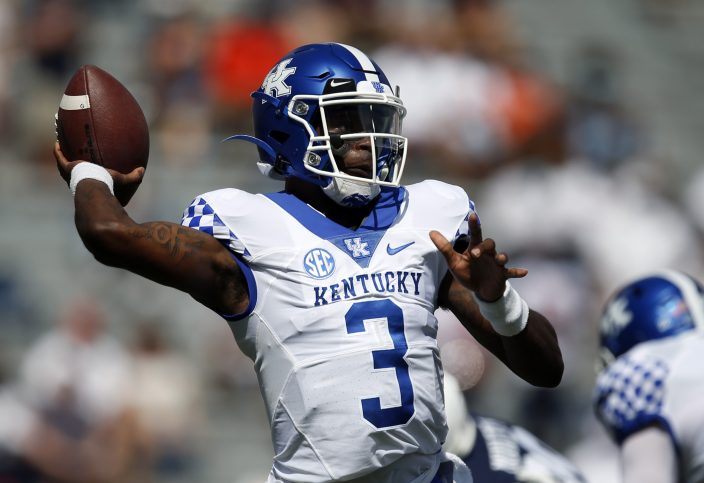 Kentucky quarterback Terry Wilson (3) throws a pass against Auburn during the first quarter of an NCAA college football game on Saturday, Sept. 26, 2020 in Auburn, Ala. (AP PhotoButch Dill)

The schools weren’t originally supposed to meet this season before the coronavirus pandemic caused the SEC to go to a conference-only schedule. Kentucky and Ole Miss are playing for just the second time in nine seasons but the first since a November 2017 shootout decided at the end.

The Wildcats led 27-17 in the second half before the Rebels rallied to win 37-34 with a 5-yard touchdown pass in the final seconds. Kentucky aims to avoid another back-and-forth affair in its home opener.

“We’ve got a huge challenge ahead of us,” Kentucky defensive coordinator Brad White said of Ole Miss. “613 yards. That’s a huge number that you’ve gotta defend.”

Other things to watch as Ole Miss visits Kentucky:

Ole Miss quarterback Matt Corral and receiver Elijah Moore thrived against Florida. Moore caught 10 passes for 227 yards while the QB finished with 395 yards, three TDs and an interception on 22-of-31 passing. Receiver Dontario Drummond caught two TD passes and completed a 45-yard attempt. Kiffin said his QBs have footwork issues to correct but was pleased with their play.

Though Terry Wilson hit seven Wildcats with at least one pass in his first game back since injuring his left knee in last season’s second game, Stoops suggested his receivers and tight ends could have done more against Auburn. Josh Ali, who led Kentucky with nine catches for 98 yards, agreed that he and others need to seize opportunities. “We had a lot of mistakes out there, left a lot of plays out there,” he said, adding they have to be more consistent.

Ole Miss and Kentucky rank 2-3 nationally in net punting. The Rebels’ average of 49 yards is one more than the Wildcats. Kentucky features the nation’s top punter in senior Max Duffy, who boomed a 75-yarder at Auburn and averages 53 yards per kick.

Former Auburn backup QB Joey Gatewood is eligible to play for Kentucky after SEC Commissioner Greg Sankey announced Wednesday night the approval of transfer waiver requests for players who switched schools within the league. The 6-foot-4, 221-pound Gatewood is expected to play behind Terry Wilson.

Ole Miss leads 27-14-1. The teams are meeting for the third consecutive time in Lexington. The home team has won four of the past five series meetings.