Britain imposed tighter restrictions on social gatherings in the port city of Liverpool and three towns as scientists reported Thursday that the number of COVID-19 cases in England has quadrupled or more in the last month.

Health Secretary Matt Hancock told the House of Commons on Thursday that the infection rate in Liverpool had risen to 268 per 100,000 people, seven times the national average. He said it was time to extend tougher measures to the city, as well as to the nearby town of Warrington and in Hartlepool and Middlesbrough, which are at the other side of the country.

The restrictions are similar to those imposed in northeastern England earlier this week, which forbid mixing of households except in public spaces like parks. The government also recommended that people visit nursing homes only in exceptional circumstances. 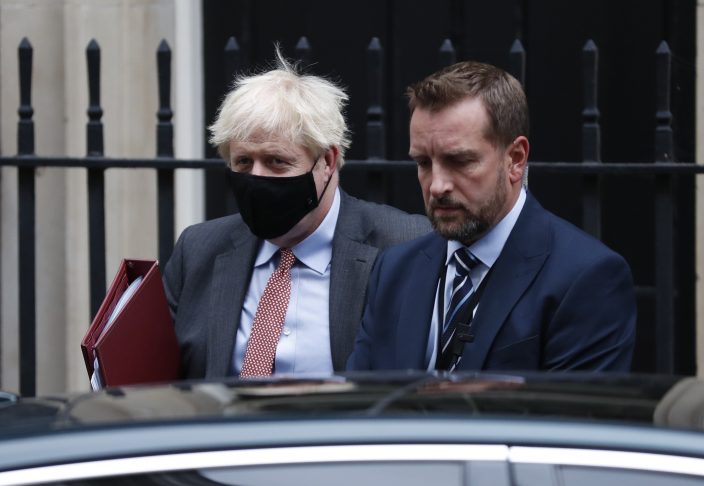 “We’ve had to take difficult but necessary decisions to suppress the virus," Hancock said. “The only alternative to suppressing the virus is to let it rip, and I will not do that.”

The measures announced Thursday are the latest in a series of heightened restrictions targeting local coronavirus hotspots as the British government struggles to control the spread of COVID-19. Confirmed daily new cases of COVID-19 rose above 7,000 in each of the past two days, the highest recorded since the pandemic began. Britain’s official death toll has passed 42,000 — the highest in Europe.

But scientists have offered some hope that the spread of the disease may be slowing. 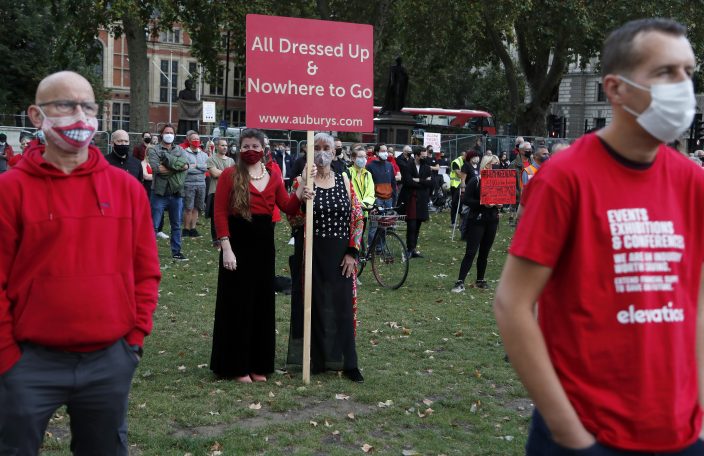 Workers from the event industry protest at Parliament Square in London, Tuesday, Sept. 29, 2020, demanding help for their industry after the shutdown due to the coronavirus outbreak. (AP PhotoFrank Augstein)

A large government-commissioned study that randomly tested tens of thousands of people in England found that the epidemic is not increasing as rapidly as scientists had feared.

“At the moment, we seem to be still at very high levels of the virus, and we do seem to still have a bit of an upward trajectory, but that very fast increase in the virus seems to have slowed and that’s very encouraging,” Paul Elliott, chair of epidemiology at Imperial College London, told the BBC.

Research by Elliott and his colleagues, based on testing of more than 80,000 volunteers across England Sept. 18-26, found around one in 200 people were infected with the coronavirus, an increase from about 1 in 800 people in early September.

Still, Elliott said the time to act was now.

“We need to get on top of this now so we don’t have an exponential increase,” he said.

Dr. David Strain of the British Medical Association urged caution, as infection rates remain high among certain groups. He noted that factors other than the government measures may be slowing the disease's spread.

“We should not be fooled into thinking that current government measures like the ‘rule of six’ – themselves confusing and inconsistent – are the silver bullet to defeating COVID-19,'' Strain said. “Everyone in their daily life needs to be aware of the risks that this deadly virus still poses.''

Elliott's study noted that the steep rise in cases began in August — when the U.K. government launched a month-long promotion offering people discounts to eat at restaurants as authorities sought to jumpstart the economy after a nationwide lockdown.

Their study noted that rates of infection are increasing among all age groups in England, with the highest prevalence among 18 to 24-year-olds. The scientists reported that Black people and those of Asian descent were twice as likely to have COVID-19 as white people in England.

Meanwhile, authorities tightened restrictions on people arriving in England from Turkey and Poland, ordering them to quarantine for 14 days because of a rise in coronavirus infection rates in those countries.

Transport Secretary Grant Shapps said Thursday that the Caribbean islands of Bonaire, Sint Eustatius and Saba have also been added to the quarantine list.

The addition of Turkey -- a major tourism destination for people from the U.K. -- follows an admission by the country’s health minister that the government’s daily COVID-19 figures reflect only patients with symptoms and not all positive cases.

Britain requires people to self-isolate for two weeks if arriving from anywhere except a list of “travel corridor” nations that have low infection rates. The list of exemptions is reviewed each Thursday. That has left many travelers scrambling to return from previously “safe” countries before the deadline.

Scotland, which sets its own quarantine rules, announced a similar move.

Jill Lawless contributed to this story