After Jelena Ostapenko eliminated No. 2 seed Karolina Pliskova at the French Open on Thursday, the conversation quickly turned to 2017.

Which made sense, of course, because that was when Ostapenko surprisingly won the championship at Roland Garros — and the last year she even won so much as one match at the clay-court tournament, let alone two, the way she has this week.

“Of course it’s in my memory, because it’s the biggest win of my career so far, but I have to move forward. And just, like, the world doesn’t stop with winning only one Grand Slam. Of course I want to achieve more and I want to be back in top 5, top 10,” Ostapenko said after beating Pliskova 6-4, 6-2 with the help of a 27-9 edge in total winners. 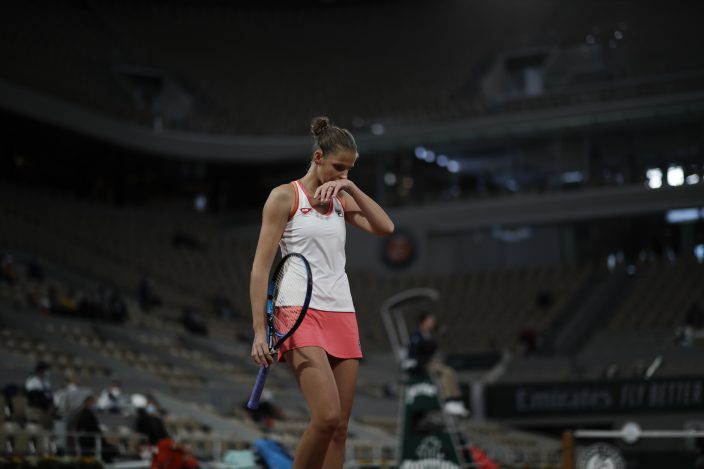 Karolina Pliskova of the Czech Republic reacts after missing a shot against Latvia's Jelena Ostapenko in the second round match of the French Open tennis tournament at the Roland Garros stadium in Paris, France, Thursday, Oct. 1, 2020. (AP PhotoAlessandra Tarantino)

“Step by step. That’s what I’m working on: my consistency,” Ostapenko said. “Still being an aggressive player — I think it can bring me a lot of wins — but consistency, probably, in my game is the key.”

Her next opponent is 87th-ranked Paula Badosa, who showed up this week with a 1-5 career record in Grand Slam matches but is into the third round at a major for the first time thanks to a 6-4, 4-6, 6-2 victory over 2017 U.S. Open champion and 2018 French Open runner-up Sloane Stephens.

Ostapenko has been as high as No. 5 and is currently No. 43. That’s not very different from where she was three years ago in Paris, ranked 47th and just two days past her 20th birthday when she became an impossible-to-predict Grand Slam champion. 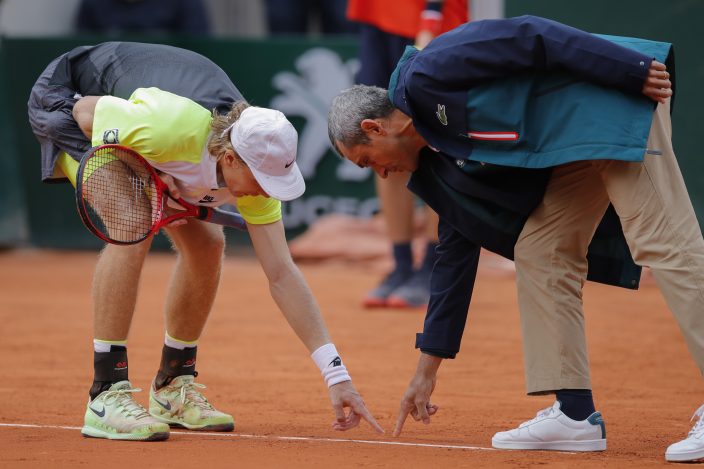 Canada's Denis Shapovalov argues with the umpire over a line call in the second round match of the French Open tennis tournament against Spain's Roberto Carballes Baena at the Roland Garros stadium in Paris, France, Thursday, Oct. 1, 2020. (AP PhotoChristophe Ena)

“I was fearless,” she recalled Thursday. “Nobody really knew me.”

Using a grip-it-and-rip-it style, Ostapenko upset Simona Halep in the final, making the Latvian the first woman since 1979 to earn her first tour-level title at a major tournament.

Nowadays, there is more subtlety to Ostapenko’s style. 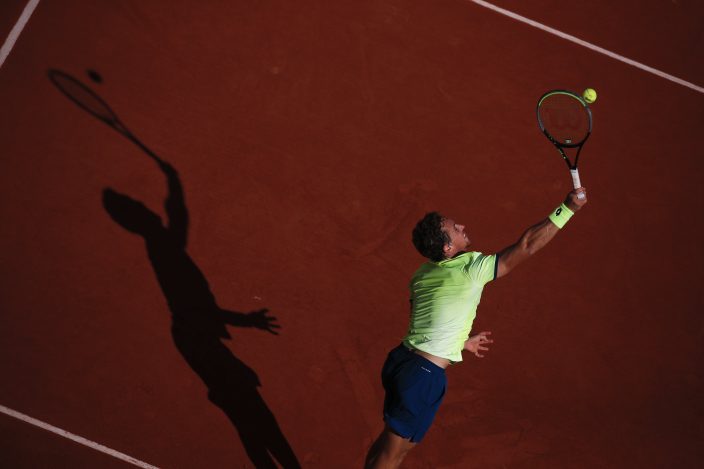 Against Pliskova, she built points. She used drop shots effectively. And she handled Pliskova’s serve, one of the best on tour: Ostapenko won 54% of her return points and broke five times.

Pliskova, who came into the French Open dealing with a leg injury, was not the most gracious foe after Thursday’s loss.

“I know that she can be tough if she’s playing well,” Pliskova said, “but I think everything started with me. Definitely, I was not playing great.” 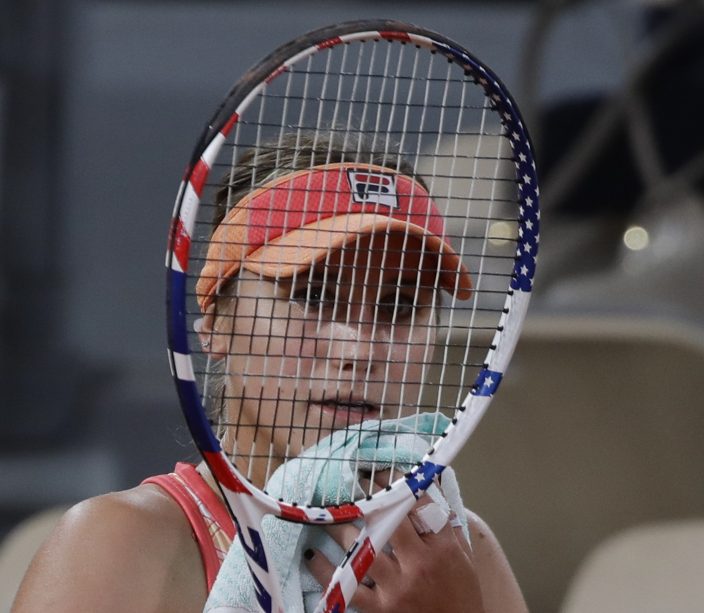 Sofia Kenin of the U.S. plays with a racket in the colors of the U.S. flag in her second round match of the French Open tennis tournament against Romania's Ana Bogdan at the Roland Garros stadium in Paris, France, Thursday, Oct. 1, 2020. (AP PhotoAlessandra Tarantino)

From what Denis Shapovalov called the French Open’s “trash scheduling” and its “freezing” weather, to a call on a shot by his opponent that looked “one inch out” to the “annoying” state of the clay and tennis balls, it seems safe to say the No. 9 seed was not in the best of moods after a five-hour loss in the second round. Sofia Kenin of the U.S. shows her disappointment with her play in the second round match of the French Open tennis tournament against Romania's Ana Bogdan at the Roland Garros stadium in Paris, France, Thursday, Oct. 1, 2020. (AP PhotoAlessandra Tarantino)

Not much rest for the weary: Shapovalov was due to play a doubles match later Thursday, and that might have displeased him the most.

“Scheduling is absolutely awful. I mean, after a five-hour match I have to play doubles now. It’s just like, it’s just complete trash scheduling. It’s disappointing,” he said. “I mean you’re in a Grand Slam — and I don’t want to sound spoiled, you know, but you expect at least some help from the tournament to help you compete. I mean, how am I supposed to come out and play doubles now after a five-hour match?”

DON’T CRY FOR ME

Australian Open champion Sofia Kenin takes the highs and lows of being a professional athlete to heart.

When she isn’t on the court, anyway.

“Before the match, I get quite emotional. Sometimes crying,” said the No. 4-seeded Kenin, who reached the third round in Paris with a 3-6, 6-3, 6-2 victory against 93rd-ranked Ana Bogdan of Romania. “Luckily, here, there are no tears, thank God.”

But while she gets nervous while waiting to play, once she is in the thick of things, trying to win, it’s a different story.

The Supreme Court will allow absen ...

There was no Cristiano Ronaldo on ...

After 'horrific' results, Sock back in win column in France