Dalvin Cook could be due for a big game Sunday when the Minnesota Vikings visit the Houston Texans in a matchup of winless teams.

Cook ranks third in the NFL in yards rushing after running for a career-high 181 yards last week in a loss to Tennessee. Houston (0-3) has the worst run defense in the NFL, allowing a whopping 188.3 yards rushing a game this season.

“It’s a very, very difficult challenge,” Houston coach Bill O’Brien said. “We’re going to have to do a good job of fundamental football. Setting the edge, playing good gap control and then tackling. If he gets into the secondary or gets around the edge, he’s got great speed so you’re going to have an issue.” 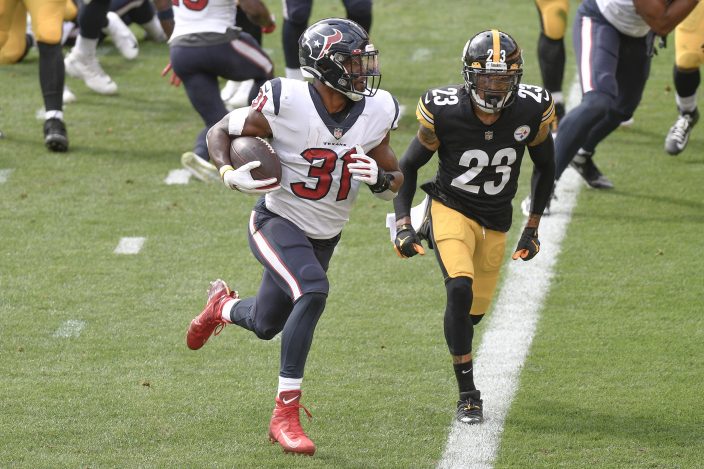 Houston Texans running back David Johnson (31) gets past Pittsburgh Steelers cornerback Joe Haden (23) to score a touchdown during the first half of an NFL football game, Sunday, Sept. 27, 2020, in Pittsburgh. (AP PhotoDon Wright)

Minnesota coach Mike Zimmer has been impressed with Cook’s work this season.

“Dalvin’s great," Zimmer said. “All backs are a little bit different, but I think Dalvin has such great feet. The way he can sliver through a hole, the way he can catch the ball. The way ... for a smaller size guy, he runs with power and determination. If he gets in the open field, he’s a really tough, tough guy to get tackled.”

The Texans have not only had trouble stopping the run this year, they’ve also been unable to run the ball effectively. Houston ranks 31st in the NFL in yards rushing with just 66 a game. They had 118 yards rushing in their opener when David Johnson ran for 77 yards, but have managed just 80 yards combined in the past two games to tumble to the bottom of the league. 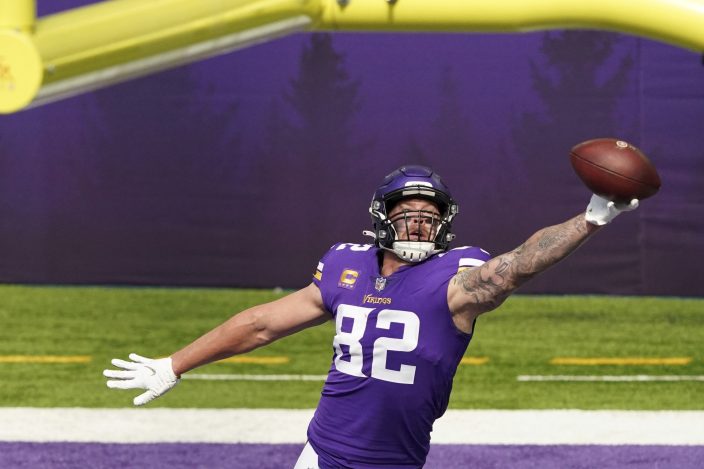 Minnesota Vikings tight end Kyle Rudolph (82) made a one-handed touchdown catch during the second half of an NFL football game against the Tennessee Titans, Sunday, Sept. 27, 2020 in Minneapolis. (Anthony SouffleStar Tribune via AP)

The Texans received Johnson in the trade with Arizona for DeAndre Hopkins and hoped he could get going to lead their running game this season after a tough year in 2019 when he managed just 345 yards rushing.

Instead he’s been unable to do much of anything since the opener and averaged just 1.77 yards a carry last week as Houston failed to score after halftime in a 28-21 loss to the Steelers.

As these teams both search for their first win, players from Minnesota and Houston insist there isn’t any panic, but instead a determination to do more to turn things around. 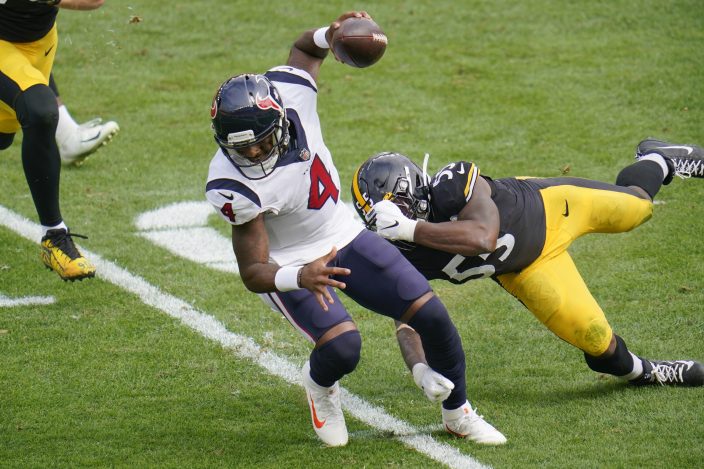 Houston Texans quarterback Deshaun Watson (4) tries to get past Pittsburgh Steelers inside linebacker Devin Bush (55) on a scramble during the first half of an NFL football game, Sunday, Sept. 27, 2020, in Pittsburgh. (AP PhotoGene J. Puskar)

“You just get to work,” Vikings quarterback Kirk Cousins said. “This isn’t the first time anybody on this team has faced adversity, so you just go right back to work, keep your head down and embrace the grind.”

Added Houston defensive end J.J. Watt: “If whatever you’re doing at the moment’s not working, work harder. So, that’s what I’m doing. That’s what we’re doing. We’re looking forward to it paying dividends.”

The Vikings had to close their facility on Tuesday and Wednesday after the Titans reported multiple positive tests for COVID-19, including players who played in the game at U.S. Bank Stadium on Sunday. Instead of conducting a normal practice on Wednesday, typically the most important day of the week when specific aspects of game plan for the upcoming opponent are installed, coaches and players participated virtually from their homes. Just like in May and June when the virus outbreak prevented teams from gathering.

“We were able to communicate and really watch tape on our iPads. That wasn’t too bad, honestly. Probably if we weren’t able to do it in the spring, it would have been a lot more hectic than it was,” Zimmer said. “We’re going to try and get in everything that we normally get in.”

When the Vikings visit on Sunday, they’ll bring with them the first two men who coached the Texans in senior defensive assistant Dom Capers and offensive coordinator Gary Kubiak. Capers was the first coach in franchise history and coached the Texans for their first four years before he was let go after the 2005 season. Kubiak took over after Capers and remained with the team until he was fired after 13 games in 2013. O’Brien took over the next season after Wade Phillips finished out the 2013 season as interim coach.

“I think they probably need to get a picture of that, the three of us on the field at the same time on Sunday,” O’Brien said.

Zimmer spoke at length about his affinity for all three men.

“In my opinion they’ve been very fortunate to have those three guys coaching for that franchise,” Zimmer said.

The Vikings had 464 yards in their loss to Tennessee, nearly tripling their output from the 28-11 loss at Indianapolis on Sept. 20. Cook was again the catalyst with his huge game, but rookie wide receiver Justin Jefferson gave the unit a vital boost with seven catches for 175 yards and a touchdown. The emergence of the first-round draft pick from LSU was just what Cousins needed — a dynamic complement to wide receiver Adam Thielen who can help keep defenses from selling out to stop Cook.

“It just shows the playmakers we have in this offense,” Thielen said. We’ve talked about it all training camp, going into these first couple weeks of these season, talked about all these guys that can make plays. You kind of saw a glimpse of that on Sunday. We’re going to continue to have guys step up and make plays in big situations.”