The story of how the First Unitarian Church of Louisville flung open its doors to protesters who marched for justice for Breonna Taylor began years before the helicopters swirled overhead, before police in riot gear began marching up the alley.

It began with much quieter moments, in the hearts of congregants like Pam Middleton.

She came to First Unitarian in 2012, at her darkest hour. Her husband had died, and she’d fallen into despair, and the First Unitarian community helped her begin again. She found joy; she joined a dance group. Exterior photo of the First Unitarian Church in Louisville, Ky., is shown Wednesday, Sept. 30, 2020. The church has for months played a background role in the protest movement in a downtown square a mile away, dropping off ice, bandaging wounds.  (AP PhotoTimothy D. Easley)

But when one dancer, a Black woman, posted online that she was terrified of being brutalized by police when she walked outside, Middleton was stunned, and ashamed. In the 1960s, she’d fought for women’s rights. She protested the war in Vietnam. But she did not march for racial justice. She had tried to atone ever since.

First Unitarian, like Middleton, had humbled itself with the hard self-reflection she believes all white Americans must undertake: They considered their church’s progressive actions throughout history, the times they rose to the moment, but also the times they had failed.

The church has for months played a background role in the protest movement in a downtown square a mile away that demonstrators have occupied in honor of Taylor, the 26-year-old emergency medical technician killed in her home when police burst through her door in the middle of the night in a botched drug raid. This was an opportunity to quietly drop off ice, to bandage wounds, to listen to Black voices. 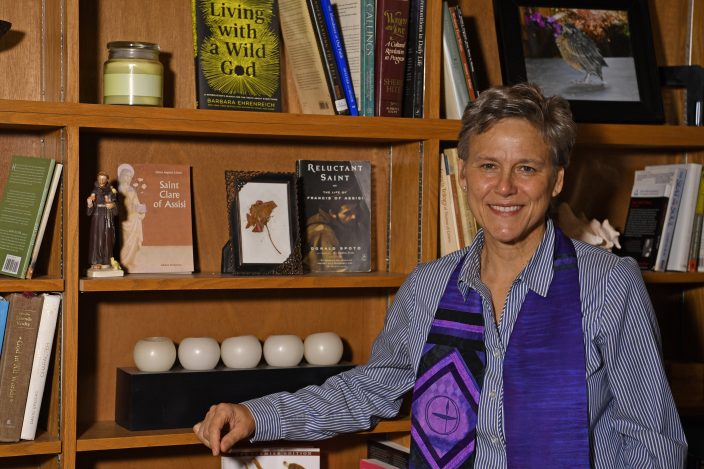 Reverend Lori Lyle, minister of the First Unitarian Churchin Louisville, Ky., is photographed Tuesday, Sept. 29, 2020. Her church has played a background role in the protest movement in a downtown square a mile away that demonstrators have occupied for months to demand justice for Breonna Taylor. (AP PhotoTimothy D. Easley)

In the background is where they wanted to remain. But then, a string of serendipitous events thrust them into the spotlight and into history.

When the church told protest leaders that people could seek refuge there as needed, they assumed small groups might need shelter from time to time. But demonstrators were marching nearby as curfew fell. There was a small fire at the public library across the street, and police in riot gear with guns and batons closed in. A flurry of phone calls were made and the church declared itself a sanctuary and welcomed all to come inside.

Protesters crammed into the courtyard and front lawn as police marched down the alley and set up a perimeter. Journalists from all over the world captured this conflict, the church rising up in the background of the photographs, its Black Lives Matter sign tied high above the stained-glass windows. 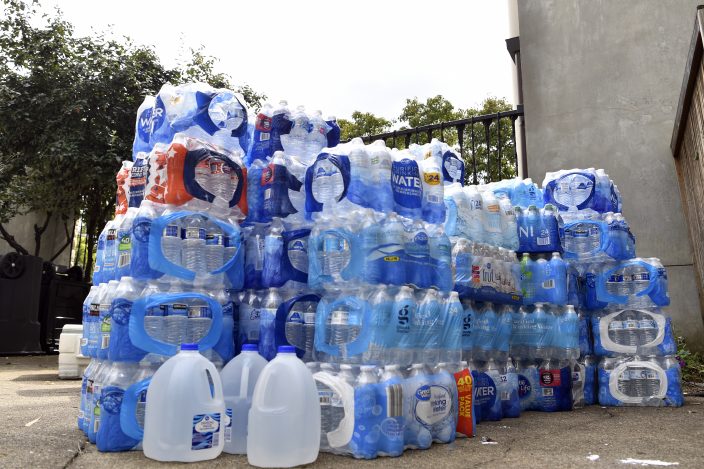 Supplies of water are stacked up in the courtyard of the First Unitarian Church in Louisville, Ky., Tuesday, Sept. 29, 2020. The church has played a background role in the protest movement in a downtown square a mile away that demonstrators have occupied for months to demand justice for Breonna Taylor. (AP PhotoTimothy D. Easley)

Inside, Middleton and other congregants were scrambling, many of them white women, many in their 70s, like her. They set up a triage unit in what moments earlier had been the lobby of the sanctuary to tend to the sick or wounded. They scrounged through the kitchen cabinets to find food for all these people.

“Just breathe,” they told each other as their church became the epicenter of one of the tensest moments in their city’s history. The downtown streets all around them were blocked with barricades and military vehicles, as marchers filled the streets to protest the attorney general’s announcement that no charges would be filed against the police officers who shot and killed Taylor. 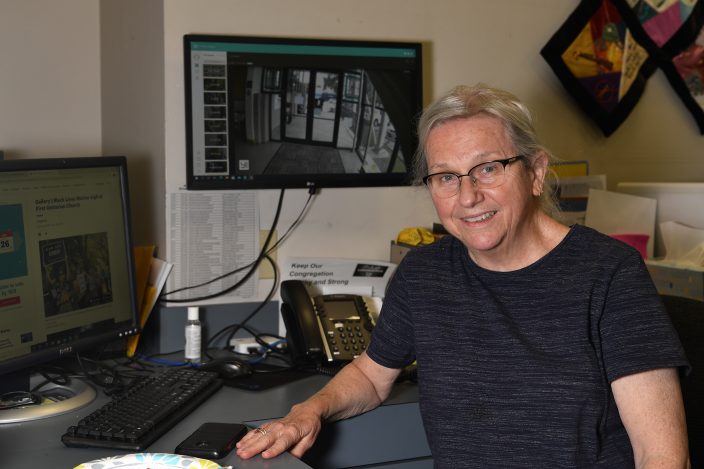 Kathy Kremer, the archivist for the First Unitarian Church in Louisville, Ky., is photographed Tuesday, Sept. 29, 2020. "Every time we give a bottle of water to someone, God is there," Kremer recalled the minister saying and they are words she said she'd never forget because it perfectly summarized her feelings about faith and meaning. "Every time we offer comfort, God is there. Whenever we put a Band-Aid on somebody or talk to someone who just got out of jail, or fed them, or gave them something to wear, or let them sleep, God is there." (AP PhotoTimothy D. Easley)

“It felt very providential, and I’m not necessarily a person who believes in providence,” said Lisa Willner, a state representative and church member. She was at the square as part of the demonstration when she made the first call to the reverend suggesting it might be a good place to offer as a sanctuary.

Protesters returned every night as long as they citywide curfew stayed in place. It became, for several days, the heart of this movement. Donations poured in: people dropped off water, snacks and toilet paper. So, too, did invective. One called them the “devil’s church.” Someone emailed Rev. Lori Kyle and said they’d looked at the website and found no evidence of God.

But she told her congregation that she had seen God in all they had done. 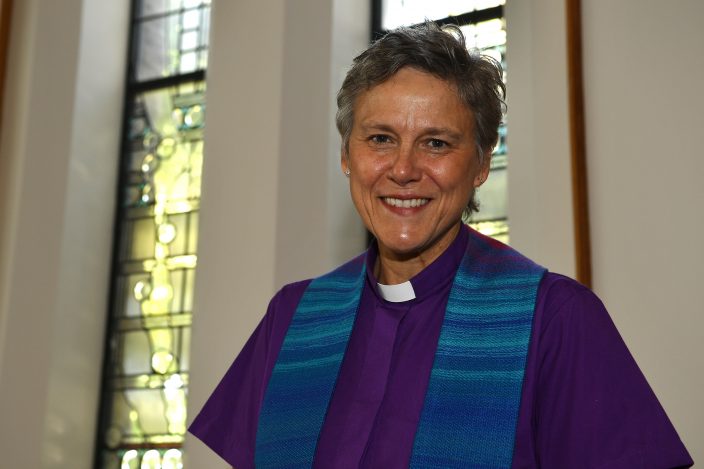 Reverend Lori Kyle, the minister of the First Unitarian Church in Louisville, Ky., is photographed Thursday, Oct. 1, 2020. The church has for months played a background role in the protest movement in a downtown square a mile away that demonstrators have occupied in honor of Breonna Taylor, the 26-year-old emergency medical technician killed in her home when police burst through her door in the middle of the night in a botched drug raid. (AP PhotoTimothy D. Easley)

“`Every time we give a bottle of water to someone, God is there,’” congregant Kathy Kremer recalled the minister saying. The words perfectly summarized her feelings about faith and meaning: “Every time we offer comfort, God is there. Whenever we put a Band-Aid on somebody or talk to someone who just got out of jail, or fed them, or gave them something to wear, or let them sleep, God is there.”

Middleton has for months spent several days each week at the protest site downtown. As a retired doctor, she has offered her skills to protesters injured by police. One young woman had a bruise the size of cantaloupe from being pelted with a tear gas cannister. She was tear gassed herself.

Her fellow congregants did what they could to help. The church welcomes all people of all faiths, including atheists and agnostics because they believe church should be about love and service and community, and less about a specific creed.

It has long been at the forefront of civil rights movements. In 1991, its minister worked with a local civil rights leader, Louis Coleman, to stage a piece of role-reversal performance art outside an exclusive men’s club a couple blocks away. They set up a fancy dinner table, with a linen tablecloth, a bottle of wine and a floral centerpiece. Then Coleman sat down and the minister, a white man, dressed as a waiter and served him. The local newspaper snapped a photo and it hangs on the wall of the church’s library.

Before the U.S. Supreme Court legalized same-sex marriage, one minister refused to officiate any weddings at all until same-sex couples got the same rights as everyone else. They rewrote their hymnal to remove masculine pronouns so God is no longer “he” or “him.”

When the Black Lives Matter movement began in 2013, the women’s alliance suggested to the board that they hang a banner, and they did. It was vandalized more than once, and each time they replaced it.

But also: They have heard that decades ago ushers used to quietly suggest Black families who came in ought to find a different church. And before that, some of their members were slaveowners.

“We’re no different. I like to say that if we’ve been here since 1832, we are going to have reflected what’s going on in the county,” said Kremer, 70, who serves as the church’s archivist. “It was always difficult and it was never perfect. But the thing is we grappled, we struggled with it.”

The protest movement has been driven largely by the young, steeped in social media and broadcast live online. But inside this church is a very different demographic: These are mostly older people. When you call out for “Kathy,” half the women in the congregation respond, Middleton said, a testament to the popularity of that name in the post-World World II years when most of them were born.

But here they were, events unfolding so quickly it was hard for them to process in real time.

Kremer, a retired office manager who naturally likes to keep things orderly, found herself anxious about something that seems so small in retrospect. The church had just raised money to repaint some rooms. Now protesters were taping signs to those walls, directing people to food and bathrooms and jail support. She fretted about the paint for a while, tried to stand up a sign on an easel asking people not to tape anything to the walls, but the easel was quickly lost in the crowd. Then she realized: The paint does not matter.

Because at the same time there was fear. Dozens of officers were surrounding the building, a response the minister describes as “clearly incongruent” with what was happening.

Still, the parishioners here said they found incredible beauty in what happened over those days. That first, chaotic night, they tracked down enough boxes of macaroni and cheese to make 16 pounds of it. Over time, meals got better. A chef in the crowd made enough chili and chicken to feed the whole group. People opened their wallets and handed over every bill to keep the meals coming.

A toilet broke; a protester announced he was a plumber, and got it working again. People started sweeping and mopping. One woman swept the alley. Middleton said the parking lot was cleaner than it’s ever been.

Middleton doesn’t like the word “proud,” because if you become proud, she said, you might stop searching. But she feels something close to that about what her church has done.

“It’s not enough, let me make it clear, anything that I can do is not enough,” she said. “But it is necessary. It is what needs to be done.”