The script has flipped in the nearly three years since the previous meeting between the Philadelphia Eagles and San Francisco 49ers.

The Niners left Philadelphia that day after a lopsided loss as a winless team in coach Kyle Shanahan’s first season with a thin roster so battered by injuries they nearly had to play a tight end at tackle.

“That was a game I’ve tried to forget,” Shanahan said this week. “That was a very miserable game.” 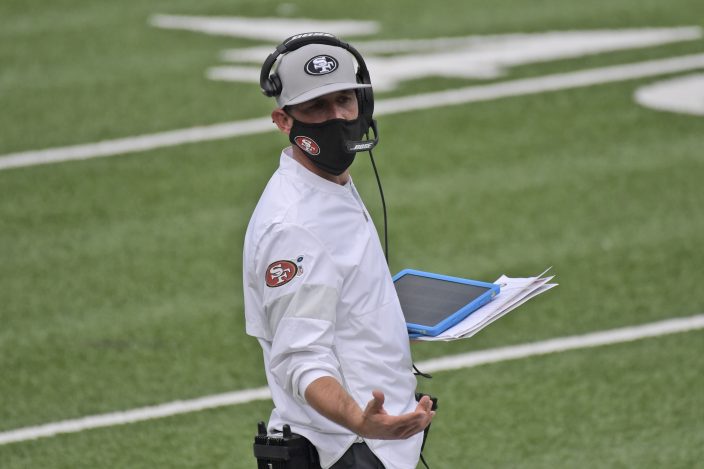 The 49ers returned home with an 0-8 record, acquired quarterback Jimmy Garoppolo in a trade the next day and have transformed into a power that went to the Super Bowl a year ago.

The Eagles (0-2-1) went on to win the Super Bowl that season but enter the rematch on Sunday against San Francisco (2-1) searching for answers to reverse their worst start to a season in more that two decades.

Quarterback Carson Wentz has the lowest passer rating in the NFL at 63.9 and has committed the most turnovers with seven on a team that has done little right since taking a 17-0 lead in the opener against Washington. They lost that game 27-17, were beaten handily by the Rams the next week and tied Cincinnati in Week 3 for the team’s worst start since going 0-4 in 1999. 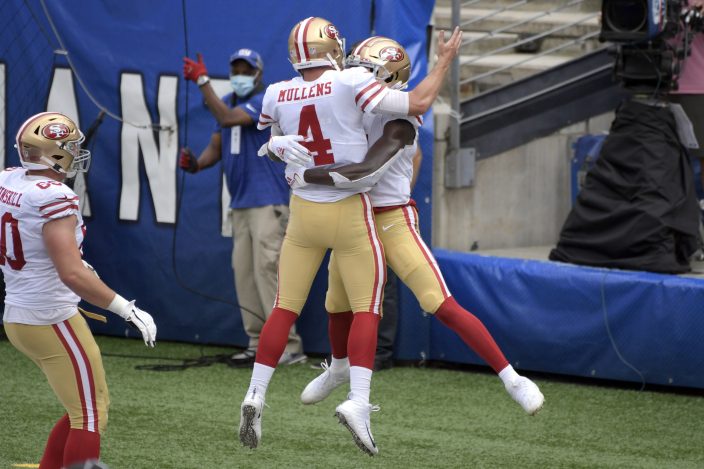 That was the 49ers situation after losing 33-10 to the Eagles on Oct. 29, 2017, to fall to 0-8 that season. They lost a half-dozen players to injuries that game, which almost forced tight end Garrett Celek to play tackle.

The Niners have dealt with a similar spate of injuries this season with Garoppolo, All-Pro tight end George Kittle, star cornerback Richard Sherman, 2019 Defensive Rookie of the Year Nick Bosa, running Raheem Mostert and No. 1 receiver Deebo Samuel among the key players to miss time this season.

Kittle should be back this week and there’s a possibility Garoppolo and Samuel can play, but the 49ers have shown they have the depth to handle it following back-to-back lopsided wins over the Jets and Giants with short-handed rosters.

“I think we’re much deeper at every position,” Kittle said. “We’re also way more mature. We had a lot of rookies and second-year guys playing then."

Shanahan isn’t focused on Wentz’s early season struggles that have included poor decisions and bad accuracy that have led to far more mistakes than usual for a player who was in MVP contention three years ago. Shanahan figures it’s only a matter of time until that player returns.

“We’re coaching like we’re playing against Carson Wentz, who is one of the better quarterbacks in this league,” he said. “He was the best player in the league the year they won the Super Bowl. I think he’s done a lot of good things since. I know his numbers aren’t great this year and I know a lot of people are saying things about him, but when I watched the film, I see Carson Wentz.”

GIVE MILES THE ROCK

Philadelphia’s Miles Sanders has 190 yards rushing in two games, averaging 5.0 yards per carry. But he only ran the ball three times out of 15 offensive plays in overtime against Cincinnati. Pederson is prone to abandoning the run quickly, but he said Sanders was fatigued late in the game for the second straight week.

Sanders missed training camp with a hamstring injury. With Philadelphia’s passing game struggling, leaning on Sanders is even more important. But the Eagles can’t do that if he’s tired in the second half. Boston Scott (3.7 yards per carry) and Corey Clement (3.0) haven’t done much when they ran the ball.

“Coaches have a game plan and we put all our trust in the coaches,” Sanders said. “So whatever play is called in the huddle, I’m going to run it.”

If Garoppolo can’t play again this week because of an ankle injury, the Niners are in more than capable hands with Nick Mullens at quarterback. He threw for 343 yards and a touchdown last week and has 2,620 yards in his nine starts. Only Patrick Mahomes (2,810) and Andrew Luck (2,631) had more after nine starts.

“Nick’s as good of a pro as we have in this building,” tackle Mike McGlinchey said. “He’s always on his preparation. The way that his mind works and the way that he’s able to think through the demands of our offense is as good as anybody.”

Eagles defensive coordinator Jim Schwartz has faced Shanahan’s offense several times over the years so he’s preparing his team against the scheme more than the players, especially with San Francisco dealing with several injuries.

“We really don’t concern ourselves too much with their injuries. Everybody’s dealing with that in the NFL,” Schwartz said. “I think the biggest thing there is their scheme has a long track record. ... Whether they have a running back that’s started the season or a guy that’s coming off the practice squad, it really doesn’t change what they’re trying to accomplish in the game.”

The Niners will have a new long snapper for the game after the team’s second-longest tenured player, Kyle Nelson, was released. Nelson had several bad snaps last week, leading to the change. Taybor Pepper will take over the role this week.

China on Thursday accused the U.S. ...