Crimes against humanity, war crimes, and even crimes of genocide are committed with impunity in Congo, despite a damning report issued 10 years ago, Mukwege told The Associated Press in an interview via the internet from the Panzi Hospital he founded in Bukavu in eastern Congo to treat survivors of sexual violence.

“We know that when crimes go unpunished, it simply means that we have opened the door to the pursuit of more crimes, and the example of Congo is very striking," he said. "So today, the Congolese population has spoken out to demand justice.” 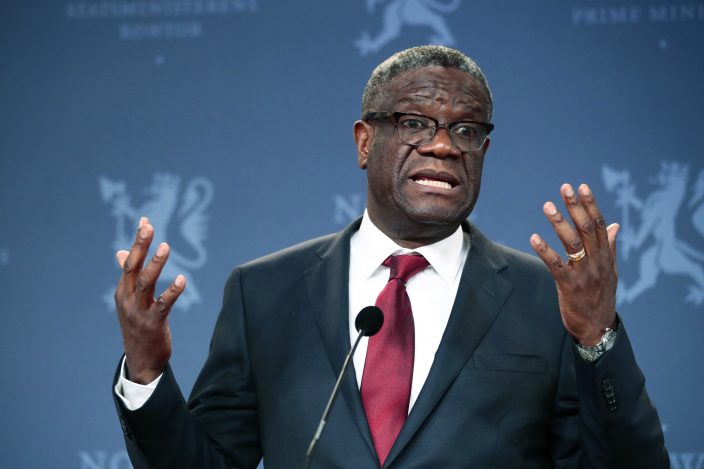 FILE - In this Dec. 11, 2018 file photo, Nobel Peace Prize laureate Dr. Denis Mukwege speaks to the media during a news conference in Oslo, Norway. Death threats against the Nobel Peace Prize-winning Congolese doctor have alarmed his supporters who are urging in Sept. 2020 the United Nations to reinstate protection by its peacekeepers, but it likely won't return. (Lise AserudNTB Scanpix via AP, File)

The doctor has a groundswell of support in Bukavu where thousands marched Thursday to demand justice and action from Congo's government and the international community.

Women and children were the main victims of the violence documented in the U.N. report, which recommended that Congo implement mechanisms of transitional justice. But little has been done, Mukwege said.

In August, Congo President Felix Tshisekedi said that he wants the government to combat the abuses and crimes through justice for past and present crimes.

Mukwege also said it is also the responsibility of the U.N. to do what it can for Congo.

“The United Nations' main mandate is to guarantee international peace and security and, therefore, its responsibility is to use the reports it has issued to bring peace,” he said, saying that the U.N. should create an international criminal court for Congo.

“We tried everything ... Violence has done nothing but has simply created a cycle of violence. Negotiations have been tried, but the negotiations have not solved anything ... they have simply allowed these criminals to have positions in the administration, in the army, in the police, and in the security services," he alleged.

International justice coupled with national jurisdiction could be key “to be able to say simply to all criminals: ‘That’s not accepted.'”

Mukwege has recently received widely reported threats against him, his family and his hospital. He said threats come as a result of the climate in Congo that permits violence. The U.N. last month sent peacekeepers to protect him and the hospital, where more than 85,000 women have received treatment for problems from rape or childbirth and have been helped to rebuild their lives in a region with some of the world's highest rates of sexual violence.

He survived an assassination attempt in 2012 and has faced death threats before.

Today, he says, it is the women who cry for justice.

“I am very proud to see heroines, strong women, powerful women who fight not only for their rights, but for the rights of their children, for the rights of generations to come," said Mukwege. He said the women spoke up despite "the men who thought they had crushed them definitively.”

To those women who may have lost hope after being violated, he added: “You are victorious! Don’t consider yourself as a woman who has failed ... be able to say ‘I’m going to fight for women’s rights so that I’m the last one who is raped.’”

Mukwege was awarded the 2018 Nobel Peace Prize for his work at the hospital. The award was shared with Nadia Murad, a Yazidi woman who was raped by Islamic State militants in Iraq and has become a global advocate for victims of sexual violence.