Baker Mayfield got the homecoming stuff out of the way quickly as the Cleveland quarterback talked about preparing for his second NFL game in Texas.

Austin is the best city in the Lone Star State, he declared to laughter after the first question. The $1.2 billion home of the Dallas Cowboys is a cool stadium, particularly since Mayfield won a Big 12 championship the last time he played there with Oklahoma three years ago.

It didn't take Mayfield long to get to the more important stuff, such as the Browns (2-1) taking a winning record into Sunday's game for the first time since late in the 2014 season. Dak Prescott and the Cowboys (1-2) are trying to get back to .500. 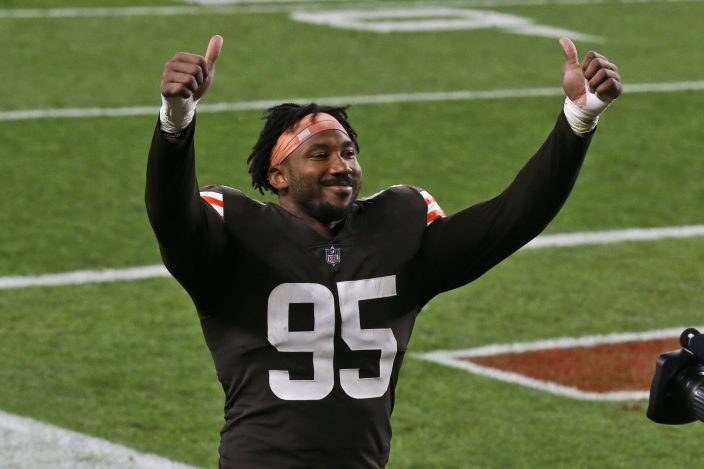 “I will have plenty of people there — friends and family, loved ones and all those good people there,” said Mayfield, whose first NFL game in Texas was a 29-13 loss at Houston as a rookie. “But I have to treat it like any other game and have to go do our job.”

Cleveland defensive end Myles Garrett is coming home, too — much closer to home since he grew up a few miles from AT&T Stadium. Garrett was the NFL's top draft pick out of Texas A&M in 2017, a year before Mayfield.

Four-time All-Pro right guard Zack Martin of Dallas didn't get to play his homecoming game at Indianapolis two years ago, missing a game for the first time in his career with a knee injury. But he sees where a player might be a little more hyped. 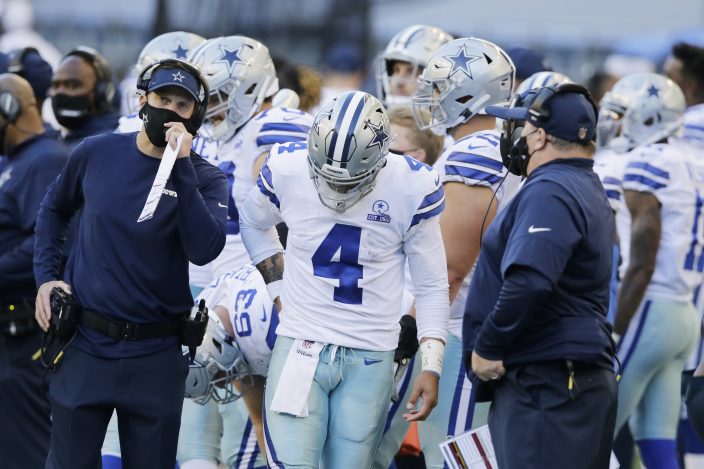 Dallas Cowboys quarterback Dak Prescott (4) stands on the sideline with coaches during the second half of an NFL football game against the Seattle Seahawks, Sunday, Sept. 27, 2020, in Seattle. The Seahawks won 38-31. (AP PhotoJohn Froschauer)

“I’m sure some guys definitely have that when they go to their hometown,” Martin said. “I think the message here, what we try, especially on the offensive line, you’ve got to prepare the same way for every game. You’ve got to be ready for whatever they throw at you.”

Mayfield hasn’t had to do much in the fourth quarter in Cleveland’s consecutive wins, including 34-20 last week over Washington. He’s ready if that changes about 200 miles north of where he grew up. 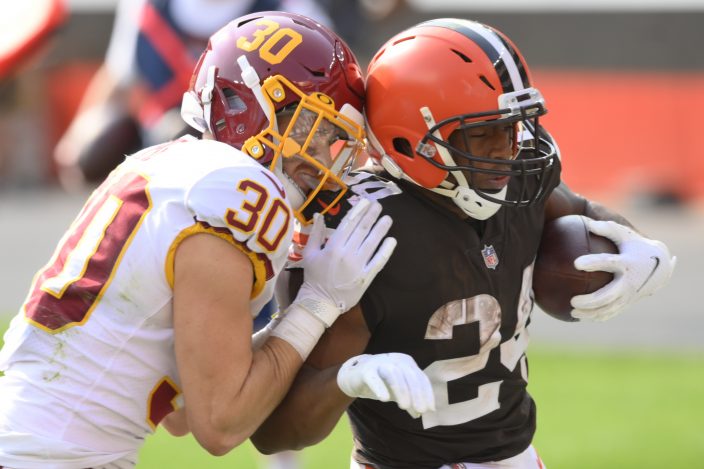 Coach Kevin Stefanski turned to the running game against Cincinnati and Washington to grind out those victories — and eat up time — and asked Mayfield to throw just five total passes in the combined 30 minutes over the past two fourth quarters.

But if the situation dictates differently in Dallas, Mayfield is prepared to match Prescott pass for pass.

“When it comes down to it, we are playing the Cowboys' defense and we have to do whatever it takes to win,” Mayfield said. “If that is a shootout, then great, and if it is another game where we have to control the clock, then we will do that.” 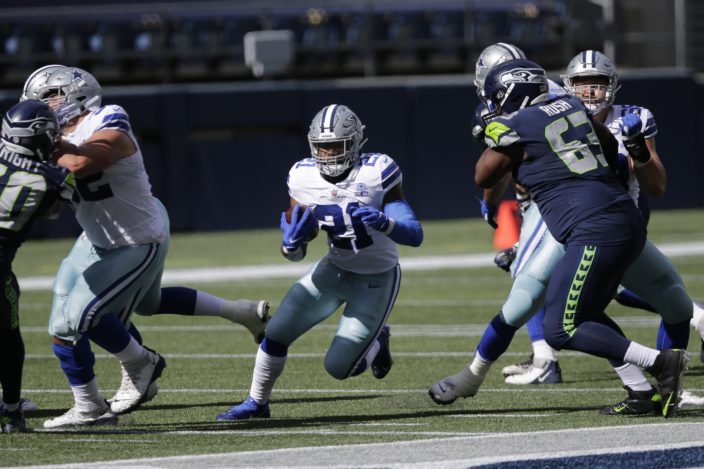 Dallas Cowboys running back Ezekiel Elliott (21) rushes against the Seattle Seahawks during the first half of an NFL football game, Sunday, Sept. 27, 2020, in Seattle. (AP PhotoJohn Froschauer)

The 2016 NFL Offensive Rookie of the Year joined Jameis Winston (last season) as the only quarterbacks with consecutive games of at least 450 yards.

For Winston, those were two of Tampa Bay's wins in a 7-9 season. Prescott has just a 1-1 record to show for his after a 38-31 loss in Seattle. While Prescott did plenty to give the Cowboys a chance to win, his three turnovers proved critical. Dallas is tied for the third-worst turnover margin at minus-4.

“I thought Dak had a great command,” coach Mike McCarthy said. “When the result is what it was, you have to talk about the negative plays. But he clearly understands the importance of ball security. We’ll continue to stress that.”

Browns star running back Nick Chubb has gone over 100 yards the past two games by breaking off long gains and some tougher, “dirty” runs for minimal yardage.

Already one of the NFL’s best, Chubb said the chance to play against an elite back such as Dallas' Ezekiel Elliott doesn’t give him any more motivation. Chubb is fourth in the NFL with 292 yards. Elliott, a two-time rushing champion, is tied for ninth at 219.

“I go out there and play my game,” Chubb said.

Martin played a different position for the first time in his seven seasons against Seattle, moving to right tackle when rookie Terence Steele had to leave the game because of an illness. Martin's move also resulted in Joe Looney sliding from center to right guard and rookie Tyler Biadasz filling Looney's spot.

Another factor in the uncertainty up front is seven-time Pro Bowl left tackle Tyron Smith, who missed the past two games with a neck issue. Smith could return against the Browns, and Martin said the plan is for him to return to his normal position. If Smith is back, the Cowboys will have to decide between Steele and Brandon Knight at right tackle.

Dallas' Aldon Smith leads the NFL with four sacks after missing all of the previous four seasons while suspended for off-field issues. Garrett had two sacks last week, including a game-sealing strip-sack and recovery in the fourth quarter. Smith has 51½ sacks in 62 career games, while Garrett has 33½ in 40 games.

An attacker armed with a knife kil ...