Supreme Court nominee Amy Coney Barrett signed a 2006 newspaper ad sponsored by an anti-abortion group in which she said she opposed “abortion on demand” and defended “the right to life from fertilization to the end of natural life.”

The ad, which had more than 1,200 names attached to it, appears to be the most direct expression of Barrett’s opposition to abortion and is sure to intensify debate that she would vote to restrict, if not overturn, abortion rights if she is confirmed to the Supreme Court.

It was not included in materials Barrett provided to the Senate Judiciary Committee for her pending high-court nomination or in 2017, when she was nominated to the job she currently holds as a judge on the federal appeals court based in Chicago. 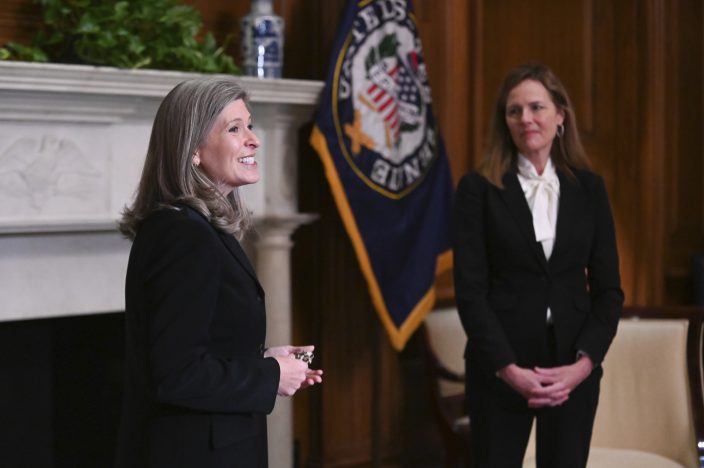 White House spokesperson Judd Deere said Barrett already has distinguished her personal views from her responsibility as a judge. “As Judge Barrett said on the day she was nominated, ‘A judge must apply the law as written. Judges are not policymakers, and they must be resolute in setting aside any policy views they might hold,’” Deere said in an email.

Barrett, meeting for a third day with senators on Capitol Hill, declined to comment when asked why she did not disclose the ad on her questionnaire. 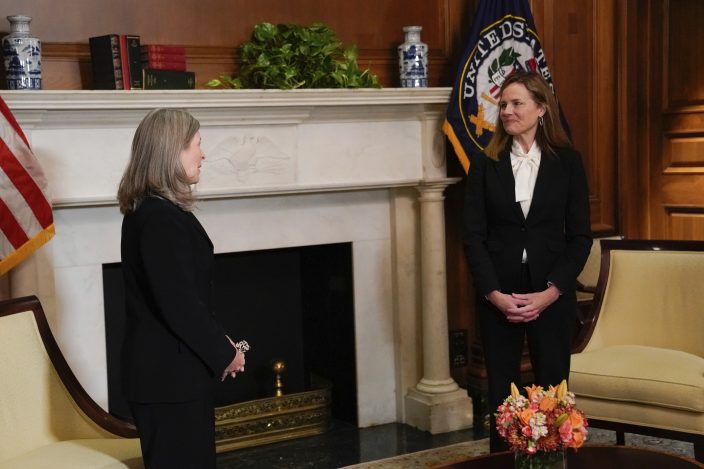 She was meeting with Sen. Josh Hawley, R-Mo, who has pledged to support only nominees who acknowledge that Roe v. Wade was wrongly decided. "How she will vote in the future on Roe, I don’t know,” Hawley said after the meeting.

Barrett was a professor at the University of Notre Dame Law School when she and her husband, Jesse, along with other people affiliated with Notre Dame, signed the brief statement sponsored by Right to Life of St. Joseph County, Indiana. “We, the following citizens of Michiana, oppose abortion on demand and defend the right to life from fertilization to the end of natural life,” the ad in the South Bend (Indiana) Tribune read. “Please continue to pray to end abortion.”

The statement was part of a two-page spread that ran in conjunction with the anniversary of the Supreme Court’s Roe v. Wade ruling in 1973 that declared a nationwide, constitutional right to abortion. “It’s time to put an end to the barbaric legacy of Roe v. Wade and restore laws that protect the lives of unborn children,” the other, unsigned page of the ad read. Jackie Appleman, executive director of the anti-abortion group, declined to comment. The group is now known as Right to Life Michiana, encompassing parts of Indiana and Michigan.

The South Bend Tribune provided a copy of the ad, dated Jan. 21, 2006, to The Associated Press. The Guardian newspaper first reported the existence of the ad.

Barrett's name on the ad points in the same direction as her membership in Notre Dame’s “Faculty for Life” group and her name on a 2015 letter to Roman Catholic bishops affirming the “value of human life from conception to natural death.” 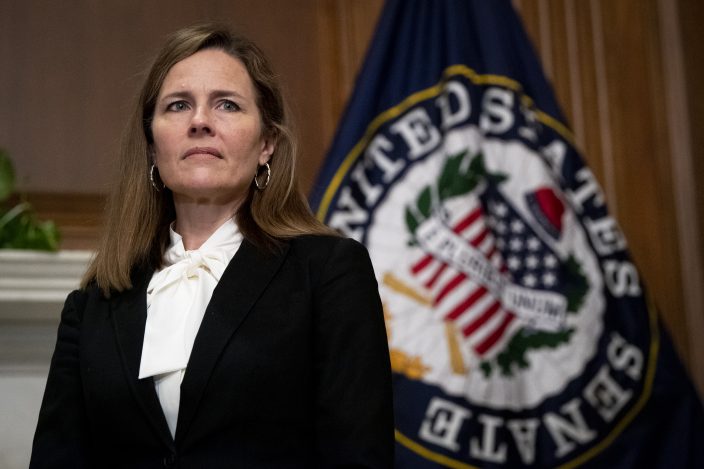 But she said about abortion in her 2017 questionnaire before her confirmation to the appeals court that "my views on this or any other question will have no bearing on the discharge of my duties as a judge.”

On the Senate floor, meanwhile, Democrats who know they can’t stop Barrett’s nomination continued Thursday to use Senate rules to delay and call attention to Republican states’ lawsuit, backed by the Trump administration, to strike down the Affordable Care Act. The court will hear the latest challenge to the law a week after the election, and if confirmed by then, Barrett could take part.

“The threat to Americans’ health care is very, very real,” Schumer said before senators voted on whether to prevent the Department of Justice from arguing to strike down the Affordable Care Act in the Supreme Court. “And Senate Republicans are tying themselves in knots in trying to explain how it’s not.”

While Democrats knew the vote would fail, Schumer tied up business on the Senate floor for over an hour – and forced Republicans to go on the record as endorsing the administration’s efforts to repeal it. Six Republicans voted with Democrats: Maine Sen. Susan Collins, Iowa Sen. Joni Ernst, Colorado Sen. Cory Gardner, Arizona Sen. Martha McSally and Alaska Sens. Lisa Murkowksi and Dan Sullivan. All but Murkowski are in competitive races for reelection this year.

Trump said in Tuesday’s debate that he doesn’t know Barrett’s views on Roe v. Wade and didn’t discuss them with her when they met in the Oval Office three days after Ginsburg’s death. She said in her Senate questionnaire that no one had asked her about her views on any specific legal issue.

She has voted at least twice on abortion issues as an appellate judge, both times joining dissenting opinions to decisions in favor of abortion rights.

Last year, after a three-judge panel blocked an Indiana law that would make it harder for a minor to have an abortion without her parents being notified, Barrett voted to have the decision thrown out and the case reheard by the full court. In July, the Supreme Court did, in fact, throw out the panel’s ruling and ordered a new look at the case.

In 2018, a three-judge panel ruled that Indiana laws requiring that funerals be held for fetal remains after an abortion or miscarriage and banning abortions because of the sex, race or developmental disability of a fetus were unconstitutional.

Barrett was among four judges who wanted the full court to weigh in and suggested that the laws, signed by then-Gov. Mike Pence, might be constitutional.

Last year, the Supreme Court reinstated the fetal remains law, but not the ban on abortions for race, sex and developmental disabilities.

Barrett, who is Catholic, co-wrote a 1998 law review article in which she said “that Catholic judges (if they are faithful to the teachings of their church), are morally precluded from enforcing the death penalty. This means that they can neither themselves sentence criminals to death nor enforce jury recommendations of death.” The article in the Marquette Law Journal was jointly bylined with John Garvey, then a Notre Dame law professor and now president of Catholic University in Washington, D.C.

The authors, though, drew a distinction between the church's opposition to capital punishment and abortion. “The prohibitions against abortion and euthanasia (properly defined) are absolute," they wrote, but that “those against war and capital punishment are not.”

“There are two evident differences between the cases. First, abortion and euthanasia take away innocent life. This is not always so with war and punishment.”

Subs score late to give Austria 3-1 win over North Mace ...

Austria finally earned a victory a ...