Whether competing in the Olympics, for an NCAA championship or in the WNBA Finals, Seattle's stars have always come out on top. The pair have helped USA Basketball win the last four gold medals at the Olympics with Bird being a part of all of them.

In college, the duo led UConn to a combined six championships, including four in a row when Stewart was at the school, 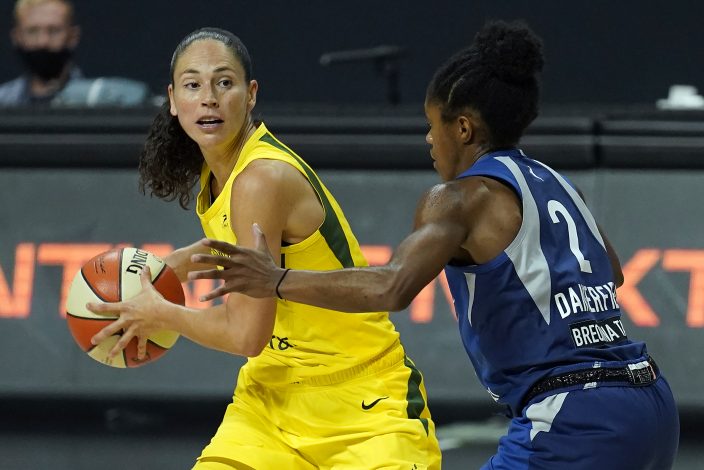 Now they are trying to help the Storm win the fourth WNBA championship in franchise history. Bird's been a part of all three of the previous titles, including teaming up with Stewart for the 2018 crown.

Bird, who turns 40 later this month, can't explain why she and Stewart have an unblemished record in championship games and series.

“It’s tough. I don’t know, I guess if I could tell you what it was I’d bottle it and sell it to every upcoming basketball player,” Bird said. “I don’t know if I could put words around it. Some of it is luck. Go through every WNBA championship, there’s always luck involved. Sometimes the ball goes your way."

Standing in the way of continuing that unbeaten streak is league MVP A'ja Wilson and top-seeded Las Vegas. Game 1 of the best-of-five series is Friday night in Bradenton, Florida.

Wilson has been the cornerstone of the franchise since Las Vegas drafted her with the No. 1 pick in 2018. She averaged 20.5 points, 8.5 rebounds and two blocks this year for the Aces. She stepped her game up in the postseason, including a 23-point, 11-rebound effort in the decisive fifth game of the semifinals against Connecticut.

Wilson said she “knew it was my time to put the team on my back,” scoring 11 points in the final quarter of the win that sent the team to the finals, including making nine of 10 free throws. The 6-foot-5 left-hander said she thought she was in “cruise control throughout the whole season. When the fourth quarter came, had to flip the switch. Felt like I did that. The job still isn’t done.”

The Aces are appearing in the franchise's second WNBA championship. The other appearance was in 2008 when the team was located in San Antonio. Aces' coach Bill Laimbeer was in charge of the Detroit Shock that season, who beat the Silver Stars for the championship.

He has overhauled the Aces roster, putting his stamp on how they play since the franchise moved to Las Vegas three years ago.

“I do this to win, I don’t do this for money,” Laimbeer said. “That comes through to our players. this is what it’s all about, competing for the championship. ... I like building things and getting teams to the pinnacle and see if we can win. I enjoy it.”

Some other tidbits about the Seattle-Las Vegas WNBA Finals matchup:

Kayla McBride remembers being a part of San Antonio teams that were 23-79 over the final three years in the city. Three years later, and in a new city, the Aces are three victories away from the franchise's first title.

“Moving to Vegas was huge for us. This organization is A1 top to bottom," said McBride. “It means a lot. The next morning (after winning the semifinals) it all hit me.”

Angel McCoughtry led Atlanta to three WNBA Finals in four years during her time with the Dream. She wasn't able to bring home a championship but learned to “have fun” when she was doing it.

“I mean you think about the experience, the things you learned just like in life. You don't dwell on the past, you just take the experiences with you. That's how it is.”

The Dream got swept in all three finals, including by Seattle in 2010.

Both teams will be without key reserves in the finals. Dearica Hamby, the WNBA Sixth Woman of the Year, injured her knee in the semifinals against Connecticut and is not expected to play in the championship series. Seattle sharpshooter Sami Whitcomb left the bubble to be with her wife as she gives birth to the couple's first child.