The Stable vs. The Savages.

Just another way to say top-seeded Tampa Bay and the No. 5 Yankees meet in the best-of-five AL Division Series starting Monday at neutral site San Diego.

Tampa Bay players wear blue T-shirts with four horses lined up behind a fence, a reference to Rays manager Kevin Cash declaring “I’ve got a whole damn stable full of guys that throw 98 miles an hour” in response to Aroldis Chapman throwing a 101 mph pitch near Mike Brosseau’s head on Sept. 1.

FILE - In this Sept. 1, 2020, file photo, Tampa Bay Rays pinch-hitter Michael Brosseau, left, is restrained by a coach as second base umpire Chad Fairchild (4) warns New York Yankees relief pitcher Aroldis Chapman to stay away from Brosseau as the two players exchanged words following the Rays' 5-3 loss to the Yankees in a baseball game at Yankee Stadium in New York. The altercation started after Chapman threw a high pitch at Brosseau. The Rays wear blue T-shirts with four horses lined up behind a fence, a reference to Tampa Bay manager Kevin Cash declaring "I’ve got a whole damn stable full of guys that throw 98 miles an hour" in response to Aroldis Chapman throwing near the Mike Brosseau's head on Sept. 1. (AP PhotoKathy Willens, File)

New York sold “Savages in the Box” shirts for $29.99 each last year, memorializing manager Aaron Boone’s infamous comment on his batters during a profane rant at rookie umpire Brennan Miller in a July 18 doubleheader opener against the Rays.

“That’s the entertainment business of it. At the end of the day, it’s series like this that make the statement, not anything else,” Yankees slugger Giancarlo Stanton said Thursday.

Tampa Bay swept two games from Toronto in the first round for its first postseason series win since 2008. The Yankees took two straight at Cleveland, including a memorable 10-9 victory on Wednesday night that took 4 hours, 50 minutes, the longest nine-inning game in major league history. 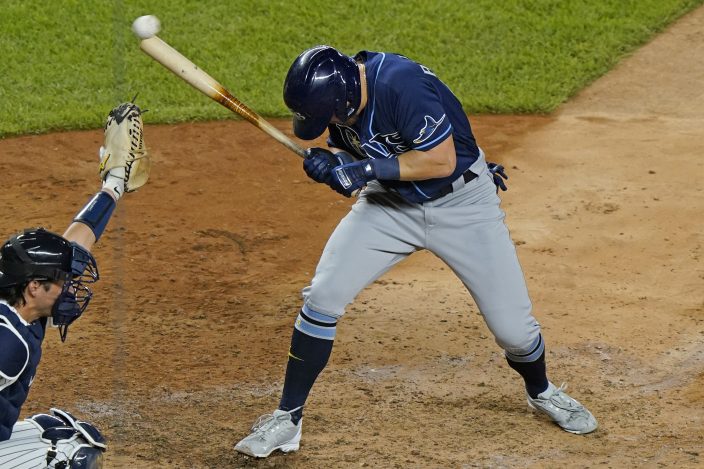 FILE - In this Sept. 1, 2020, file photo, Tampa Bay Rays pinch-hitter Michael Brosseau ducks away from a pitch from New York Yankees reliever Aroldis Chapman during the ninth inning of a baseball game at Yankee Stadium in New York, as catcher Kyle Higashioga reaches for the ball. The Rays wear blue T-shirts with four horses lined up behind a fence, a reference to Tampa Bay manager Kevin Cash declaring "I’ve got a whole damn stable full of guys that throw 98 miles an hour" in response to Aroldis Chapman throwing near the Mike Brosseau's head on Sept. 1.(AP PhotoKathy Willens, File)

The Rays made a declaration against the Yankee during the regular season. New York started 9-3 overall, lost three of four at Tropicana Field, won six straight and then got swept three in a row by the Rays in the Bronx at the start of a seven-game skid. Tampa Bay took two of three on its second trip to New York, finishing 8-2 to win the season series for the first time since 2014.

Hitting coach Marcus Thames was ejected by plate umpire Vic Carapazza during the second game of a doubleheader split at Tampa Bay on Aug. 8 for chirping from the dugout, and Boone was tossed after he ran out of the dugout to argue. Then came the Chapman pitch to Brosseau on Sept. 1, which earned the closer a three-game suspension that remains under appeal. Both managers were suspended for one game apiece.

Yankees starter Masahiro Tanaka had hit Joey Wendle with a 95 mph fastball in the first inning. The next day, New York reliever Ben Heller was tossed for hitting Hunter Renfroe. 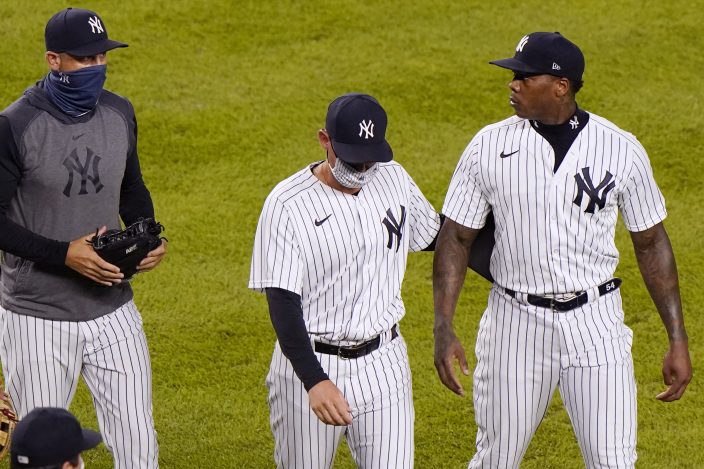 “I think everything that happened in New York hopefully is in the past,” Brosseau said. “The way that we pitch, we’re going to attack hard in. That’s the best way to get their hitters out, and that’s what we’re going to do. As far as having anything carryover, past experiences, at least from our end I think we’ve put it in the past and our focused is pretty much getting past this round and moving on.”

In May 2017, Tampa Bay’s Matt Andriese hit Matt Holliday after giving up a home run to Gary Sánchez, and Yankees reliever Tommy Layne plunked Corey Dickerson, who had hit two home runs off Tanaka. Andriese then hit Aaron Judge with a pitch.

CC Sabathia hit Jake Bauers on the wrist with a pitch in September 2018. One inning later the Rays’ Andrew Kittredge threw up-and-in to Yankees catcher Austin Romine. Sabathia hit Rays catcher Jesús Sucre on the leg leading off the bottom half. Sabathia was ejected, benches cleared, and Sabathia was suspended for five games and Kittredge for three. Sabathia’s season ended two innings shy of the 155 he needed to trigger a $500,000 bonus. The Yankees gave him the money even though they weren’t obligated to.

That wasn’t all. After the Rays’ Yonny Chirinos hit Voit on the left arm in May 2019, Sabathia threw inside to Austin Meadows and screamed at him. Sabathia and Avisaíl García shouted at each other that July.

“I don’t expect it to be a factor moving forward,” Boone said. “Obviously there’s been some things that have happened that certainly get played up. I watched highlight shows and people love to talk about it, and understandably.”

But the Rays’ dominance has been greater generally at the Trop. Tampa Bay is 56-41 at home against the Yankees since 2010, winning its home season series nine times with one split.

“There’s a lot of attention this time of year. There’s a lot of noise. There’s a lot of stuff you could choose to worry about and to distract you,” Rays general manager Erik Neander said. “I think at this point that might be there for a fleeting moment when you’ve got to answer a question about it, but our group is awfully focused on doing the things that they can control and focused on winning games.”

Boone already has committed to starting Kyle Higashioka behind the plate for Cole rather than Sánchez.

While the Rays are top seed, Brosseau downplayed his team’s positioning.

“Anytime you’ve got Yankees against Tampa, it doesn’t matter what the record is, most likely we’re going to be considered the underdog,” he said. “I think that fuels our fire a little bit. I think we have a team full of people that may be considered underdogs throughout their entire career. It’s a driving factor for sure. We like playing that way. We like playing with that chip on our shoulder, kind of that mentality to prove people wrong.”