Tulsa, which upset the Knights a year ago, is one of them.

“Personally, I’ve been waiting,” sophomore quarterback Dillon Gabriel conceded without expanding on his feelings about the Knights (2-0, 1-0 American Athletic Conference) having an opportunity Saturday night to even the score for a disappointing 34-31 loss to the Golden Hurricane. 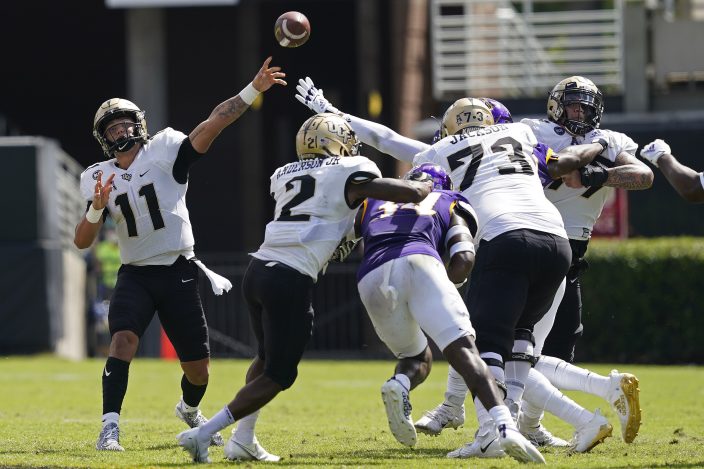 Tulsa (0-1, 0-0) has won three straight in a series that began when both schools were members of Conference USA.

UCF has won two of the past three AAC championships. Losing on the road last year to an underdog that won just two league games and finished 4-8 overall was difficult to swallow.

Tulsa, which had scheduled games against Toledo, Northwestern State and Arkansas State cancelled due to the coronavirus pandemic, is playing for the first time since opening the season with a 16-7 loss at Oklahoma State.

Linebacker Zaven Collins had three of Tulsa’s six sacks in the opener. The Hurricanes used a relentless pass rush to disrupt UCF’s prolific offense a year ago, and it’ll take a similar effort to slow down the high-scoring Knights again.

“The last three or four years I think they’ve only lost three or four ball games,” Tulsa coach Philip Montgomery said. “I know we were fortunate to be one of those last year ... but it’ll be another great test for us.”

Gabriel is off to a blazing start. He’s thrown for eight touchdowns through two games while also becoming the first UCF player to throw for 400-plus yards in consecutive games. He’s also the first Knights quarterback with back-to-back four-touchdown pass games since McKenzie Milton in 2017.

As well as Gabriel has played, he’s hardly been a one-man show in victories over Georgia Tech and East Carolina. The Knights have an abundance of offensive playmakers around the sophomore QB and have one of the most balanced attacks in college football.

“If you become one dimensional, whether it’s in the passing game or the run game, inevitably teams are going to catch up to you and stop what you’re doing,” UCF coach Josh Heupel said. “I think our ability to maintain balance, being able to run the football, is critical to who and what we are.”