From the moment Helio Castroneves first arrived at Indianapolis Motor Speedway in 2001, he followed the same route through Gasoline Alley.

He'd leave the orange-striped motorhome, sign autographs and pose for photos with fans until he reached the Team Penske garages. Then he'd duck inside one of the concrete stalls, meet with engineers and prepare to turn laps in the No. 3 car.

The 20-year partnership between Castroneves and Penske became the model of stability in a sport defined by so many parts. 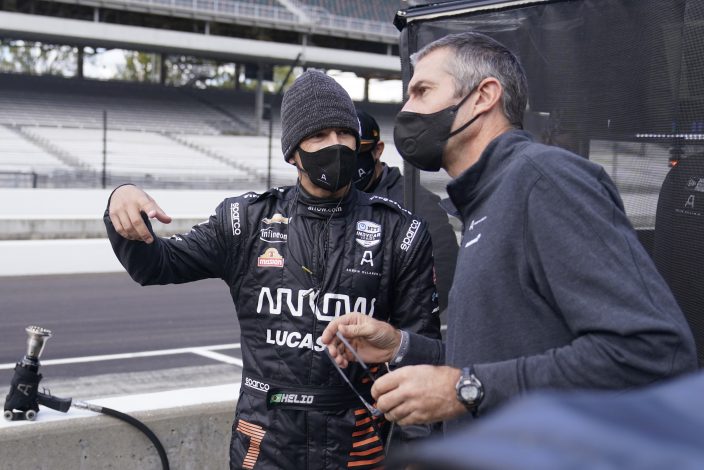 Helio Castroneves, left, of Brazil, talks with a crew member during a practice session for an IndyCar auto race at Indianapolis Motor Speedway, Thursday, Oct. 1, 2020, in Indianapolis. (AP PhotoDarron Cummings)

Now, things are changing. When the three-time Indianapolis 500 winner showed up Thursday for the inaugural Harvest GP, he pulled on a new driver's suit bearing the name of a new team owner. When he climbs into the No. 7 car, he will drive for a team other than Team Penske for the first time since the 1999 season finale, a span of 310 IndyCar races.

“There's no question it's different," Castroneves said. “It's funny because McLaren and Penske (garage tents) are right next to each other and they're both all black. But the orange really stands out."

The differences can be seen anywhere Castroneves turns this weekend.

Instead of basking in the typically warm temperatures and burgeoning greenery of May, the 45-year-old Brazilian is wearing a stocking cap on a crisp, sunny autumn day.

The grandstands that were empty for July's Brickyard 400 and IndyCar GP as well as the rescheduled Indianapolis 500 in August can accommodate up to 10,000 fans each day this weekend.

Teams like Arrow McLaren SP are working on cars in an area traditionally reserved for hospitality tents and are sharing the road course with sports cars Friday and Saturday ahead ahead of an eight-hour endurance race on Sunday.

Castroneves' longtime friend Tony Kanaan, the 2013 Indy winner, is still around after finishing an abbreviated five-race schedule. He replaced Paul Tracy in the broadcast booth for NBC Sports.

And with the blessing of Roger Penske and team president Tim Cindric, Castroneves has traded in his bright yellow Pennzoil fire suit for the black attire with the word Arrow scripted across his midsection.

“They have a great group of guys and and outstanding technology," Castroneves said, referring to his new team. “It's certainly a different operation but they do a great job."

Perhaps it will also be the start of a new chapter in Castroneves' brilliant racing career.

In 349 career IndyCar starts, Castroneves has driven to victory lane 30 times and is fourth all-time with 50 poles. He was the first international driver to win the 500 three times, posted three runner-up finishes on Indy's historic 2.5-mile oval and completed an incredible 2,810 laps from 2007-18 without dropping out of the 500.

He has never won the season championship, and if he's going to get another crack at it he will probably have to do it by moving on from Penske.

Castroneves' contract expires after this season, making him a free agent for the first time since 2000 and potentially ending a relationship that outlasted both the open-wheel split and the first change in speedway ownership since the end of World War II.

Penske moved Castroneves to a full-time spot on his sports car team in 2018, giving him cameos in the two Indianapolis races each May. Earlier this year, though, Penske announced he wouldn't compete in sports cars next season and he already has three full-time IndyCar drivers under contract.

Plus, Castroneves has been pining to get back to the series as a full-timer and this weekend's doubleheader gives him a chance to audition.

“It's great to come back," he said. “We've got a lot to do, there's a lot going on, so we'll take it as it comes. I'm excited to be back but I'm thinking about this weekend. The future will take care of itself."

Castroneves had not planned on running here this weekend until Arrow McLaren started searching for a replacement for rookie Oliver Askew, who has lingering concussion-like symptoms. He initially suffered the injury in a crash during this year's 500.

“I had a great conversation with Oliver this morning and I want to make sure he gets better," Castroneves said. “He's a good, young driver and he deserves this opportunity."

The early part of practice didn't go smoothly: Castroneves' car was slipping and sliding around the 14-turn, 2.439-mile road course. His fast lap of 1 minute, 11.6269 seconds was 23rd out of the 25 drivers on the course as Askew watched from pit row.

The question now is whether Castroneves can do well enough Friday and Saturday to land a new deal.

“Coming over here with a new team, a new group of people, it is different," he said. “But it's also exciting."

Lawyer for China exec accuses RCMP of lying about her a ...

A lawyer for a senior executive of ...