A quick look at the French Open:

Simona Halep and Amanda Anisimova will play each other at Court Philippe Chatrier in a third-round rematch of their French Open quarterfinal of a year ago. Anisimova, then just 17, won that one to reach her first Grand Slam semifinal. Halep is seeded No. 1 in Paris, where she won the title in 2018; she added a second major championship at Wimbledon last year. Anisimova is seeded 25th. Also in action in the clay-court tournament’s main stadium Friday: Rafael Nadal and Dominic Thiem, the two men who met in the past two French Open finals. The No. 2-seeded Nadal, seeking a 13th title at Roland Garros and record-tying 20th Grand Slam trophy overall, meets 74th-ranked Stefano Travaglia, while No. 3 Thiem, the runner-up to Nadal in 2018 and 2019 in France and the champion at the U.S. Open last month, takes on No. 28 Casper Ruud. Only one man from Norway ever has made it to the fourth round of a Grand Slam tournament: Ruud’s father, Christian, who made it that far at the 1997 Australian Open. 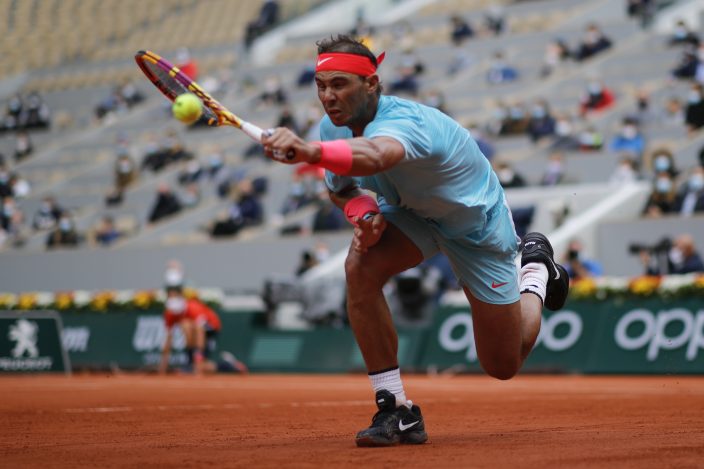 Spain's Rafael Nadal plays a shot against Mackenzie McDonald of the U.S. in the second round match of the French Open tennis tournament at the Roland Garros stadium in Paris, France, Wednesday, Sept. 30, 2020. (AP PhotoChristophe Ena)

5 — The number of Italian men who reached the third round at the French Open, the most at any Grand Slam tournament in the Open era. The previous high was three. Matteo Berrettini’s victory Thursday allowed him to join the quartet who won Wednesday: Marco Cecchinato, Jannik Sinner, Lorenzo Sonego and Stefano Travaglia.

“I don’t know why he acts sometimes the way he acts. Maybe you should better ask him, not me.” — Karen Khachanov, responding to a reporter’s question about a social media spat with Nick Kyrgios, who did not enter the French Open.