Other than playing home games in Maryland, there are few similarities between the Washington Football Team and the Baltimore Ravens.

Washington is rebuilding after finishing last in the NFC last season. Baltimore was the top seed in the AFC before losing its playoff opener.

But when these regional rivals meet Sunday, each will be looking for a bounce-back performance after a loss that included a disappointing quarterback performance. 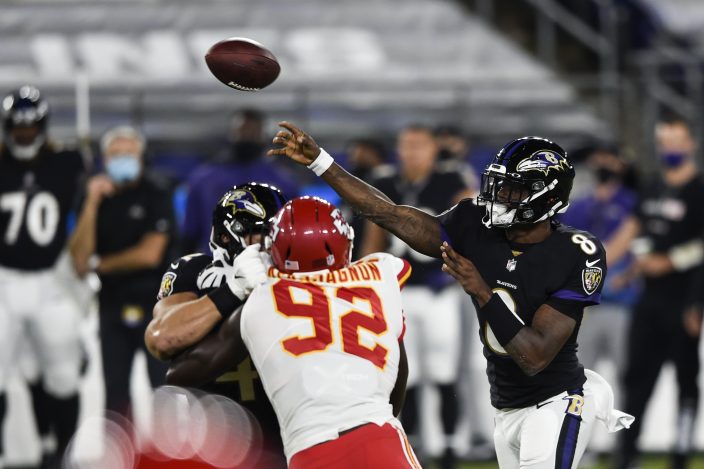 Lamar Jackson was outplayed by the Chiefs’ Patrick Mahomes in a Monday night showdown, resulting in Baltimore’s first regular-season defeat in a calendar year. Jackson managed 97 passing yards on 28 attempts, a career low of 3.5 yards per attempt.

The solution might be easier to come by for Baltimore and Jackson, last year's MVP. So far in the Jackson era, the team is 0-6 when trailing in any game by 10 points or more, a deficit that developed quickly against Kansas City. 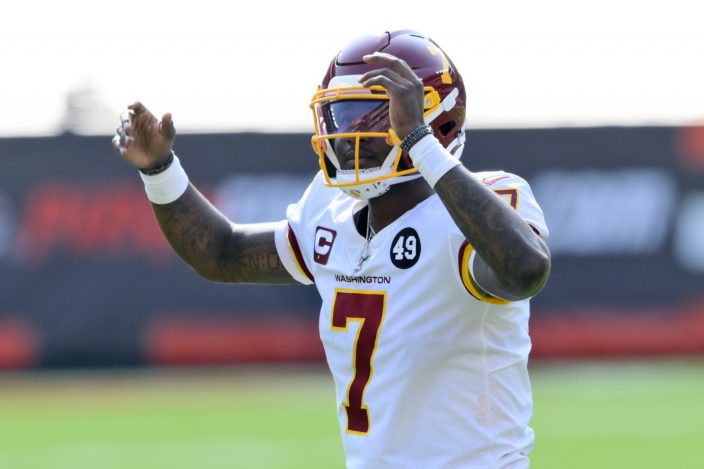 Washington Football Team quarterback Dwayne Haskins celebrates after a 2-yard rushing touchdown by running back Antonio Gibson during the second half of an NFL football game against the Cleveland Browns, Sunday, Sept. 27, 2020, in Cleveland. (AP PhotoDavid Richard)

“We just can’t get in those situations — being behind,” Jackson said. “We’ve just got to try to score each and every drive like we should be. And if we’re down, just try to execute the plays and try to move forward and put some points on the board and make the comeback.”

Running back Mark Ingram defended Jackson, saying that it’s “not on one person” but the entire offense to forge a comeback. 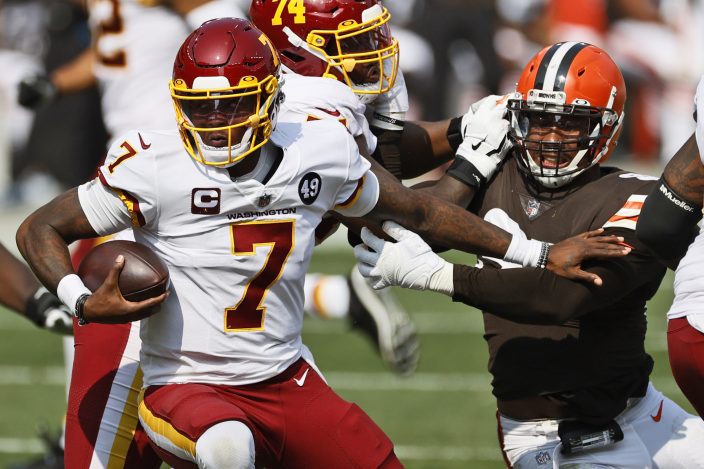 Haskins, Washington's up-and-down second-year starter, has done what his MVP counterpart has not. He helped rally Washington from a 17-0 deficit in Week 1 to beat the Philadelphia Eagles. Since then, the offense been inconsistent in losses to Arizona and Cleveland.

Offensive coordinator Scott Turner is looking for Haskins to avoid forcing the ball into coverage. Haskins said he must play better across the board.

“Definitely there wasn’t anything that I said, ‘Man, I need to do this.’ I just want to be better at everything,” Haskins said. “I’m still young. I can’t just sit here and act like I arrived, or I made it. I mean, I made it, but there’s a long way to go.” 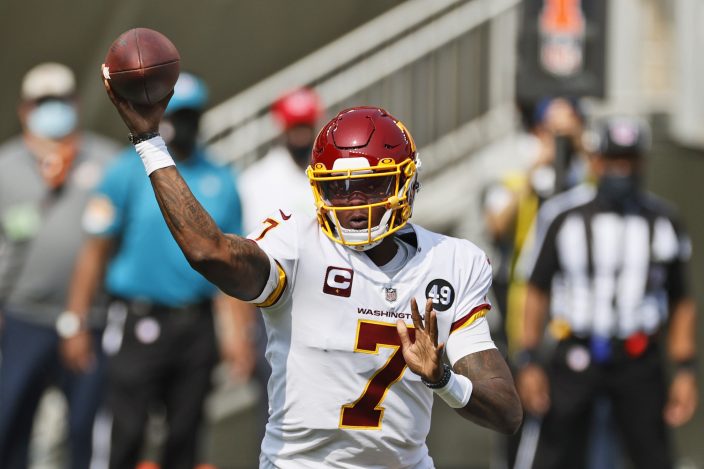 Washington coach Ron Rivera was diagnosed with a form of skin cancer over the summer and has been receiving treatment for it. On Wednesday, Rivera missed practice to receive a scheduled treatment. On Thursday, he left practice early because he was not feeling well.

“It’s a battle. I mean, he’s battling right now,” Del Rio said. “He’s tough as can be and doing what he can. As coaches and players, we just have to do everything we can to carry on the message and the things we know he’s about and make sure we’re doing a good job with it.”

The Ravens have been careful about following protocols to protect themselves from exposure to the coronavirus so as to avoid an outbreak similar to the one that forced the Tennessee Titans to shut down camp.

Expect coach John Harbaugh to have his mask on Sunday, as usual.

“We’re in our meetings with our masks on, trying to talk through our mask in meetings,” Harbaugh said. “We have been — for all three games — really good on the sideline. I don’t think there’s anybody better than us — me or our staff — from the beginning of the game to the end of the game.”

He had a momentary lapse Monday night while arguing a call but makes no apology.

“To think in a 3-hour, heated, competitive environment — especially when you’re yelling — that your mask isn’t going to fall down or whatever for 5 or 10 seconds, that would be a little hard for anybody to be held to that standard,” Harbaugh said.

He picked up where he left off in the opener with five catches and two scores against Cleveland but was limited to a combined four receptions for 51 yards and no TDs over the past two weeks.

“They’re just doubling him — trying to knock us off our pivot,” Jackson said.

Harbaugh figures that if Andrews is covered with two defenders, someone else should be open.

“If people are going to give Mark more attention now, we’re going to have to find other ways to make them pay for that,” he said.

Ravens rookie Devin Duvernay put on a dazzling display of speed Monday night with a 93-yard kickoff return, a play that Harbaugh predicted before it happened.

Duvernay, a third-round pick out of Texas, could soon be a force as a receiver.

“I do see myself and him hitting on a couple passes this season,” Jackson said. “I tried to keep him a hidden secret, but that kick return was amazing. You guys saw that motor that he had.”

Don’t overlook the bragging rights factor when Washington and Baltimore meet. Like the Jets and Giants, they play every preseason but only appear on one another’s regular-season schedules every four years.

Haskins, who attended high school in Maryland, said he understood the local importance of, “Which team are you rooting for on the Beltway?” Technically, there are two Beltways, but the question remains.

“I’ve got family and friends that live in Baltimore and a couple of teammates from Ohio State that are over on (the Ravens), too,” Haskins said. “So, I’m looking forward to competing against them and having some fun out there and making these guys better.”