As Francisco Lindor played in the longest nine-inning game in history, a nearly five-hour endurance test that ended in an empty stadium on October's first morning, he considered it may have been his last game with Cleveland.

“It crossed my mind,” he said. 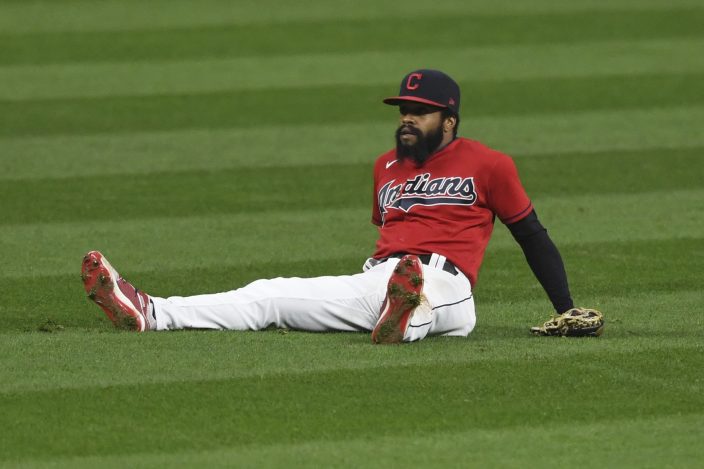 Cleveland Indians' Delino DeShields sits on the ground after committing an error during the ninth inning of Game 2 of the eam's American League wild-card baseball series against the New York Yankees, early Thursday, Oct. 1, 2020, in Cleveland. The Yankees won 10-9. (AP PhotoDavid Dermer)

And it may have also been the team's final game with the Indians name, which it's used for more than a century.

Lindor and the Indians are finished in 2020, but any lingering pain from the club's eighth straight postseason loss or failure to end a World Series title drought dating to 1948, quickly shifted to Lindor's unsettled future on Thursday. 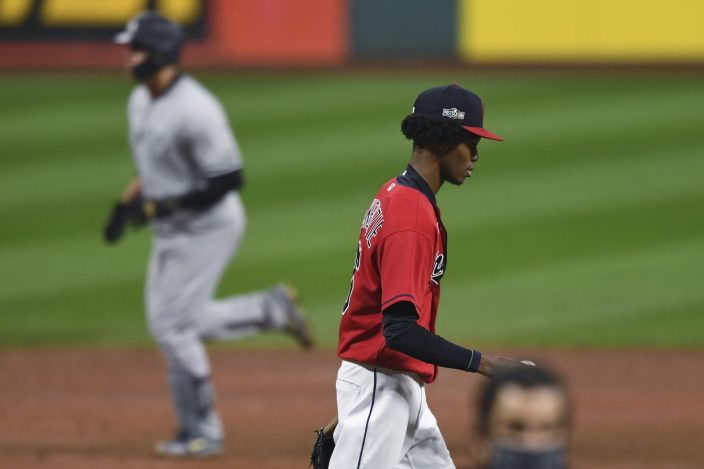 The four-time All-Star shortstop is under contractual control for next season, but the Indians can't afford to pay him $300 million and it's expected they'll trade the 26-year-old this winter before he walks as a free agent.

It's been a season-long subplot.

“It makes sense,” Lindor said. “You know, it is what it is. You can’t cover the sky with one hand. It makes sense. It’s the reputation that the organization has.” 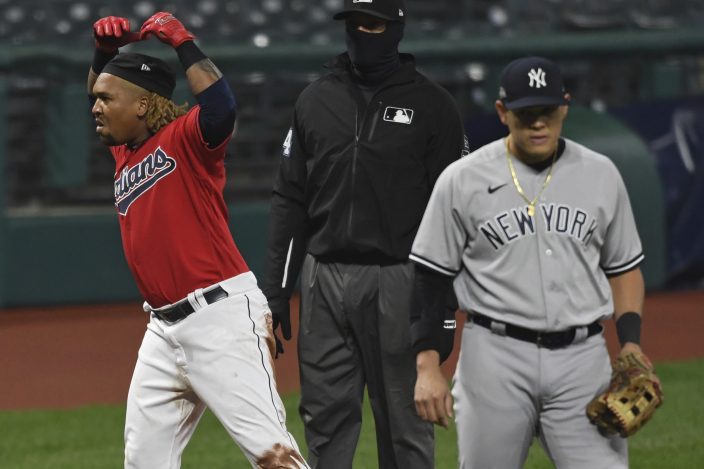 Cleveland Indians' Jose Ramirez celebrates after hitting a two-run double and advancing to third base in the fifth inning of Game 2 of an American League wild-card baseball series against the New York Yankees, Wednesday, Sept. 30, 2020, in Cleveland. (AP PhotoDavid Dermer)

Lindor, who acknowledged not playing up to his high standards over 62 games, laughed when asked if the franchise should spend more in order to get to the next level. The Indians have done that in the past and it hasn't gotten them to the top.

"That’s their problem, man. I don’t deal with that.”

Lindor also tossed around some contract figures the Dodgers gave Mookie Betts ("$340 or $370 million, something like that") before saying it wasn't about the money.

Then, Lindor, who has turned down previous contract offers from Dolan, said he believes the Indians should be able to pay him what he wants.

“Of course,” he said, repeating those words four times. “It’s a billion-dollar team. That’s all I can say.”

Lindor said a lot in his final media Zoom session to conclude 2020. He felt a mix of emotions — frustration, sadness and pride — after the Indians fought to the bitter end in a 10-9 loss to the New York Yankees in Game 2 of the wild-card series.

Lindor went 1 for 8 and struck out three times in the series, hardly the production the Indians needed from the supposed face of their franchise. There were other issues: ace Shane Bieber got pounded in Game 1, sluggers Carlos Santana and Franmil Reyes went a combined 0 for 15, and closer Brad Hand blew his first save after going 16 for 16.

The Yankees were just better, and Lindor, who wouldn't put odds on whether he'd be back in 2021, has learned during four postseasons in six years with Cleveland that the margin for error is razor thin. The Indians have to make do with what they've got.

“We’ve got to make sure we outplay everybody,” he said. "We don’t have the highest payrolls. We will never have that. ... But we got to find ways to outplay our opponents every single time.”

Maybe without Lindor next year.

The other major item at the top of Cleveland's offseason to-do list involves manager Terry Francona.

The 61-year-old was only in the dugout for 14 games due to health issues, and it's not yet known if the two-time World Series winner will be back in 2021. Francona's contract runs through the 2022 season.

First-base coach Sandy Alomar Jr. filled in for Francona and could be a candidate for openings elsewhere. He would be the obvious successor in Cleveland if Francona doesn't return.

Aside from Bieber's rough postseason debut, the right-hander was baseball's best pitcher in the regular season, becoming the first pitcher since 2006 to lead the AL in wins, ERA and strikeouts.

He's a lock to win the Cy Young Award, which will be Cleveland's fifth in 13 years.

José Ramírez, not Lindor, was the Indians' best player and his performance over the final two weeks launched him to the front of the MVP race alongside Chicago slugger José Abreu. Ramírez's last 14 hits were for extra bases.

Cleveland's team could have a new identity in 2021. The Indians announced at the start of this season that the team will consider changing its name amid a nationwide movement to remove racist symbols, names and monuments.

The team has met with Native American groups, and it's possible any new name or logo could honor Cleveland's past.

Santana had a poor season (batting .199), Hand was solid and could yield prospects in a trade and Pérez is one of baseball's best defensive catchers.

A club official from Azerbaijan wa ...

This Italian city north of Milan i ...