The next challenge for the winless Atlanta Falcons is imposing enough that it might not afford them an opportunity for another fourth-quarter collapse.

After blowing two-touchdown leads in the final period each of the last two weeks, the Falcons could have trouble getting ahead Monday night when they visit the unbeaten Green Bay Packers.

“I know the first three weeks haven’t been what we would have wanted,” Falcons quarterback Matt Ryan said. “That’s for sure. But I still have a lot of faith and a lot of belief in this football team, that we’re capable of winning, and winning regardless of who we’re going against." 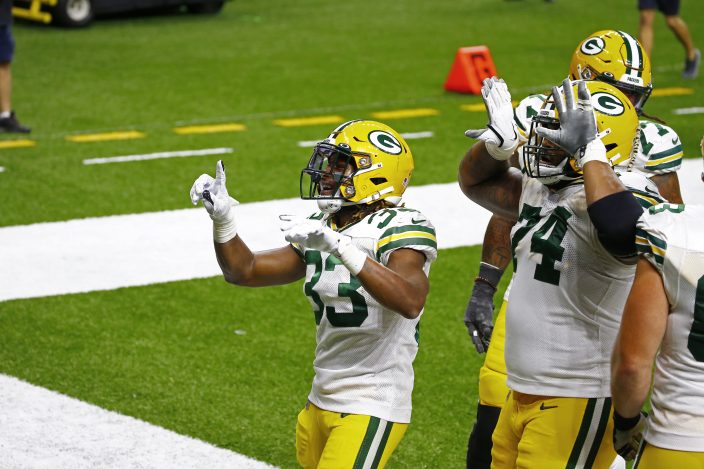 Green Bay (3-0) is the first team in NFL history to have at least 35 points and no turnovers in each of its first three games, according to the Elias Sports Bureau. The Packers average 6.9 yards per play to lead the NFL.

The Packers have trailed in each of their games this season, which could offer Atlanta (0-3) reason for hope. 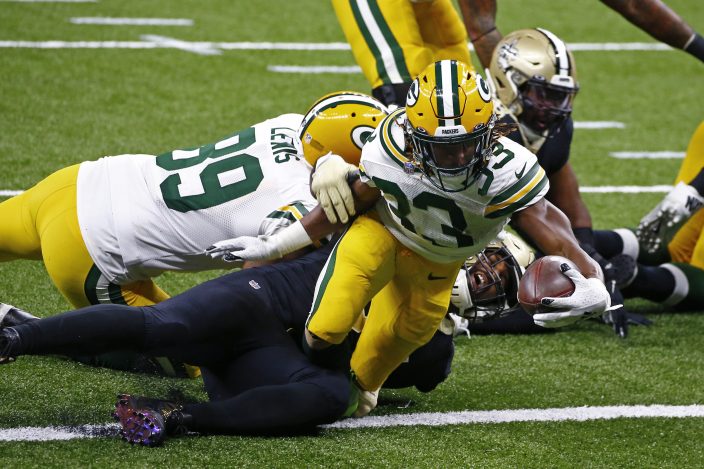 Green Bay Packers running back Aaron Jones (33) dives over the goal line for a touchdown in the second half of an NFL football game against the New Orleans Saints in New Orleans, Sunday, Sept. 27, 2020. (AP PhotoButch Dill)

Then again, getting ahead hasn’t been a problem for the Falcons. Staying in front has proved much more difficult.

Atlanta led the Dallas Cowboys 20-0 in the first quarter and 39-24 with 5 minutes remaining before falling 40-39 on a field goal as time expired, thanks in part to the Falcons’ inexplicable failure to recover a slow-rolling onside kick.

The Falcons followed that up by falling 30-26 to Chicago as the Bears scored 20 unanswered points in the final 6 1/2 minutes. The collapses brought back reminders of the Falcons blowing a 28-3 lead to the New England Patriots in the Super Bowl after the 2016 season. 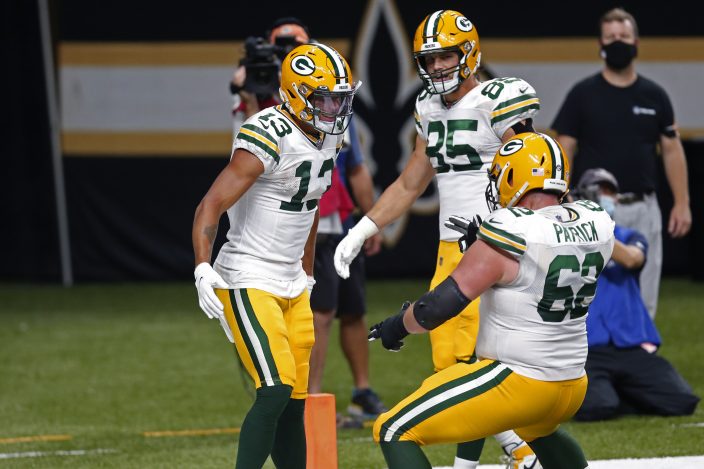 “There’s anger, obviously,” embattled Falcons coach Dan Quinn said. “There’s frustration that goes along when you don’t play well. For us losing two games that, in the regular season, is as tough as it gets. You get tested, but you also find out a lot and learn a lot from those ‘L’s.’ And that’s what I saw from our team.”

LaFleur expects the Falcons’ recent misfortune will only add to their incentive.

“We’re going to have a very hungry Atlanta Falcon team coming in here that, no doubt about it, should be 2-1 right now,” said LaFleur, a former quarterbacks coach on Quinn's Atlanta staff. “And they’re not, but that’s life in this league. Every game comes down to just a couple of plays here and there that can really change the outcome.” 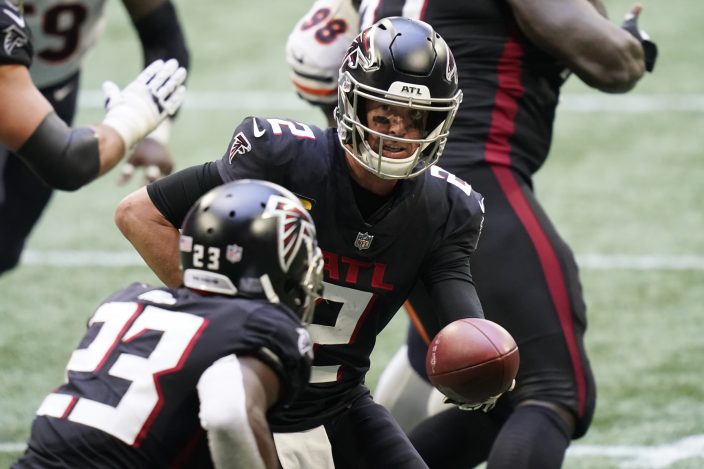 Atlanta Falcons quarterback Matt Ryan (2) hands the ball off to Atlanta Falcons running back Brian Hill (23) against the Chicago Bears during the second half of an NFL football game, Sunday, Sept. 27, 2020, in Atlanta. (AP PhotoBrynn Anderson)

All eyes in Atlanta are on Quinn.

The sixth-year coach came into 2020 knowing he would likely need to guide the Falcons to the playoffs to keep his job after two straight 7-9 seasons.

Players have been vocal in their support of Quinn, but their opinions won't matter if the losses keep piling up. 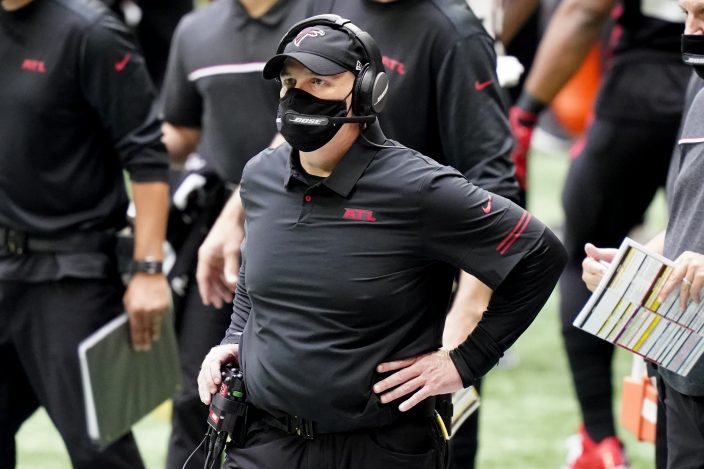 “Look at what he’s done here,” defensive back Blidi Wreh-Wilson said. “He’s always got our backs. He’s a really great coach. This is a tough spot for the team. A lot of things are being said. We just need to stay together.”

Each team has a star receiver who didn’t play last week due to injury. An ankle injury sidelined Green Bay’s Adams while Atlanta’s Julio Jones had a hamstring problem. 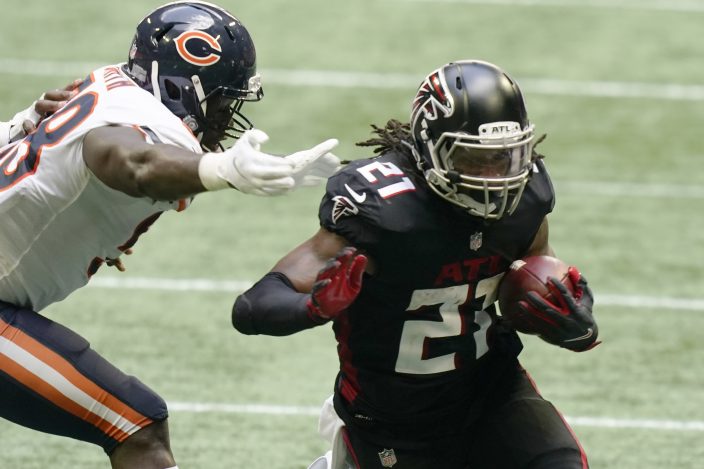 Atlanta Falcons running back Todd Gurley (21) runs against the Chicago Bears during the second half of an NFL football game, Sunday, Sept. 27, 2020, in Atlanta. (AP PhotoBrynn Anderson)

Both returned to practice this week. But each team now has another injury in its receiving corps. Atlanta's Calvin Ridley (ankle) and Green Bay's Allen Lazard (core) didn't practice Wednesday.

Green Bay has started a different combination on the offensive line for each of its first three games due to injuries, yet the Packers have allowed only two sacks all year. The Packers have given up sacks on 1.9% of their dropbacks to rank second in the NFL behind Kansas City.

The Falcons have been sacked on 3.7% of their dropbacks, which is sixth-best in the league.

Quinn is hoping cornerback Kendall Sheffield plays Monday after he missed the team’s first three games with an ailing foot.

Green Bay could be missing linebacker Christian Kirksey, who left the Packers' win over the Saints with a pectoral injury.